This post is about something I have been working on for a long time: an online Catalogue of codices written, wholly or in part, in Visigothic script. I hope you find it as useful as it is for me.

Answering the big question: how many sources?

To know how many manuscripts written in Visigothic script are out there is a question that has been wandering my mind since I started working on this script some ten years ago. It is also not the first time someone asks me for a “number” in trying to put this script testimonies within some kind of medieval manuscripts in pre-Carolingian scripts big ‘corpus’. I think that, for most of those who asked, non-specialists or non-palaeographers, Visigothic script is just something ‘odd’ that medieval Spaniards did at some point, and for them, it seems to be not comparable with the amount and meaning of sources written in Insular, Merovingian or Beneventan scripts. On the other hand, I must say Spanish palaeographers look more at their own sources instead of at the ‘big picture’ too (with exceptions as always), but, since most if not all of the studies published so far about Visigothic script are in Spanish, it feels like there is a hole regarding the general consideration of this script.

Anyway, I understand the meaning of asking for this total amount, and the worst of it is that, believe or not, until not so long ago I was not sure about what will be the correct answer. ‘Some hundred codices, plenty of fragments, and several thousands of charters, it depends on the area for which you are asking for’ I would have said. I do not like to be so vague, I like quantitative data as much as anyone. Thus, I put in my to-do list to figure out exactly the number and, in for a penny in for a pound, why not to make a catalogue and make it online so anyone can know this total amount of manuscripts in/with Visigothic script too, and, moreover, where to find each one of them?

I know I have a problem setting up easily achievable tasks on my to-do lists... but, the thing is that thanks to all of you who have asked about my sources, sending me references to new fragments within your nearby or known archives and/or bibliography, I have finally begun. Since I started this blog two months ago it has had over a thousand hits, who could have imagined so much interest in Visigothic script? I am immensely grateful to all of you for your feedback and support.

Looking for a starting point

I think there is no need of emphasising here again the relevance of knowing exactly how many sources we have to work on studying a script (characteristics, evolution, etc.), moreover when it comes to analysing its regional variants as I am doing: I need to know how many manuscripts written in Visigothic script for Galicia, as well as outside it, are out there to compare their characteristics in order to define (or not) a new regional variant. An updated catalogue of manuscripts in Visigothic script, both charters and codices (I am adding cartularies here) is a must for any early medieval palaeographer. I am saying nothing new. Luckily, this concern was shared in the recent and not so recent past for a few scholars, amazing ‘visigothicologist’ pioneers, but, unfortunately, to keep up with an updated corpus is an ideal that, because of its magnitude, has faded.

Nowadays, there are two main catalogues for codices [1], the latest dating from 1999. Both are a must regarding, among other topics, the study of Visigothic script, although, as Barbara Shailor has pointed out [2], they have their problems since the first one gathers only the codices produced within the Astur-Leonese kingdom while the latter presents an in-depth study for some codices saying little about others. Since 1999, no one has been collecting codices in Visigothic script openly, all together, in one place. Thus, I wondered again, how many? Dates? Characteristics? Can you imagine how many other new fragments have been appearing since then? How many folia have been recovered from bindings in the last years? How have studies improved helping to date and geographically locate a source, meaning that the records included in both publications may not be accurate?

We are in the Digital Age now, archives have updated their practices and catalogues. I can even add, by first-hand experience, that folders/boxes that were forgotten within the main archives are now being re-opened. Thereby, I think it is time to try making a new catalogue, one adding everything that has been said, but above all, allowing easy updates and easy consultation, so anyone can access the information on it and collaborate.

A work in progress that you can already consult… 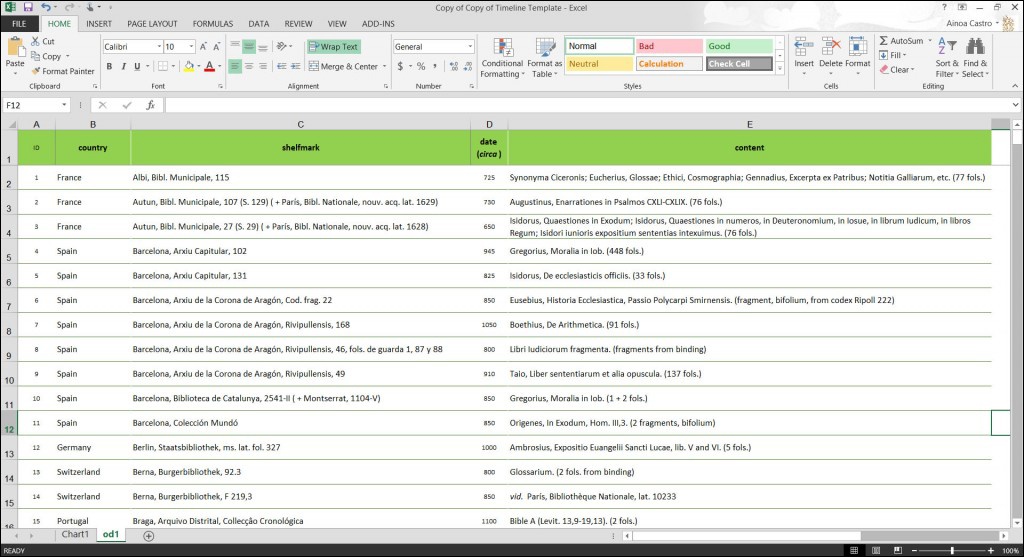 So, you can check my current online Catalogue of Visigothic script codices as an Excel spreadsheet as well as an interactive timeline. A list of all the codices preserved in Visigothic script in any form (full codices, cartularies, folia, fragments…) organised by archive and with a small description. Gathering all the charters is a lifelong project. I have the list of all the Galician charters in Visigothic script, but I do not want to even think about making the same list for Leon! I will add short references within the catalogue, but it has no sense to explain them in full.

Please note that this corpus of sources is not a list of Visigothic codices – meaning codices made and used by the Visigoths – but of codices or fragments of codex that were either written in Visigothic script as a primary graphic system or that have glosses in this script and were written in another – mainly Caroline minuscule. Thus, they are not specifically listed in here the codices preserved, though few, for the Visigothic period, written in Uncial or Half-uncial scripts. This is not a list drawn up following historical or chronological principles (aka. all the manuscripts from the Late Roman Empire to the twelfth century, all the manuscripts from the Visigothic kingdom), but palaeographic – those written in Caroline minuscule script, though with Visigothic script influence, are not incorporated by the same reason. Also, albeit it is true that the main area of ​​use for Visigothic script is the Iberian Peninsula and Septimania, the fact that a manuscript appears on this list does not necessarily mean that it was produced in this geographic area, either if the Visigothic script is the main script on it or if it has only glosses incorporated into the text by a reader who used this script for personal purposes. As examples see Lucca, Bibl. Capitolare, 490 – from Lucca, Italy – or Paris, Bibliothèque Nationale, lat. 609 – which seems to have been written somewhere in Aquitania. On the difference between a list of ‘Visigothic codices’ and one of ‘Codices in Visigothic script’ please read, for more details, this reference [3].

… and see how it grows

I am building this Littera Visigothica’s Online Catalogue of Visigothic script manuscripts departing from the two fundamental references in the footnote. For each reference known, I am adding images of its digital surrogate if available, as far as the copyright lets me, also searching online and adding the link if they have been digitised. The description of each entry has its supposed date, the manuscript ‘name’ (how is it call or has been called by the specialists) if it has one, archival reference, copyist/s and illuminator/s’ name if they are known, content, extent (codex, fragment), script/s, provenance/origin if it is known or has been argued, and where to find more about it. I am steadily updating and improving the list as I am reading about new fragments and publications, as I am learning, so, be patient, the final one will take a bit to be done.

This is a dream. I am only one, and I am doing this in my spare time. This is not my main project, so to get a result as Prof. B. Shailor advocated, and all of us – myself first – would want, will take time. If you have any suggestions, comments or questions or if you want to collaborate with me, please do not hesitate to let me know. I am a great fan of feedback and I look forward to hearing from you.

[update July 2018: I am waiting for funding to work on this properly. Thank you for your understanding]

This is a great resource, Ainoa! What program did you use to develop it?

Many thanks! It’s an amazing app developed by Northwestern University. Here -> http://timeline.knightlab.com/

Wow, Ainoa, this is a wonderful resource. thank you so much for sharing it! I look forward to meeting you next week…

Wonderful information, thanks for sharing.

Way cool timeline. Good job and well done. The only problem is that the date line below the entries do not move, so everything looks like it is on the same date (glad you put in the date with individual entries)

Hi Richard! Yes, you’re right but didn’t happen before. Have you always seen it that way?