“The most complete antiphonary of purely Spanish liturgical use, with a total of 5000 responsories with verses… it stands out for its rigor in tonal organization, and for its range of notational signs…”. Zapke, Hispania Vetus, 252.

Antiphonaries are codices which contain the sung portions of the Divine Office [1]. Besides the illuminations that complement the texts, they are particularly relevant for their musical notation. These codices were highly appreciated by their contemporaries who acknowledged the specialised work done by the scribes who wrote them. I cannot read musical notation, but I can recognise the difficulty of its study. I cannot even think how challenging should have been to write and read notation in medieval times, when many users have problems just to read the texts!

For being the result of collaboration among scribes, one for the text and another for the notation when it was not only one who wrote both (or even who prepared the parchment too), and illuminators, these codices are also appreciated for the information they can provide about their cultural context: about the scriptorium in which they were made and how the medieval work of writing a codex was organised and developed. 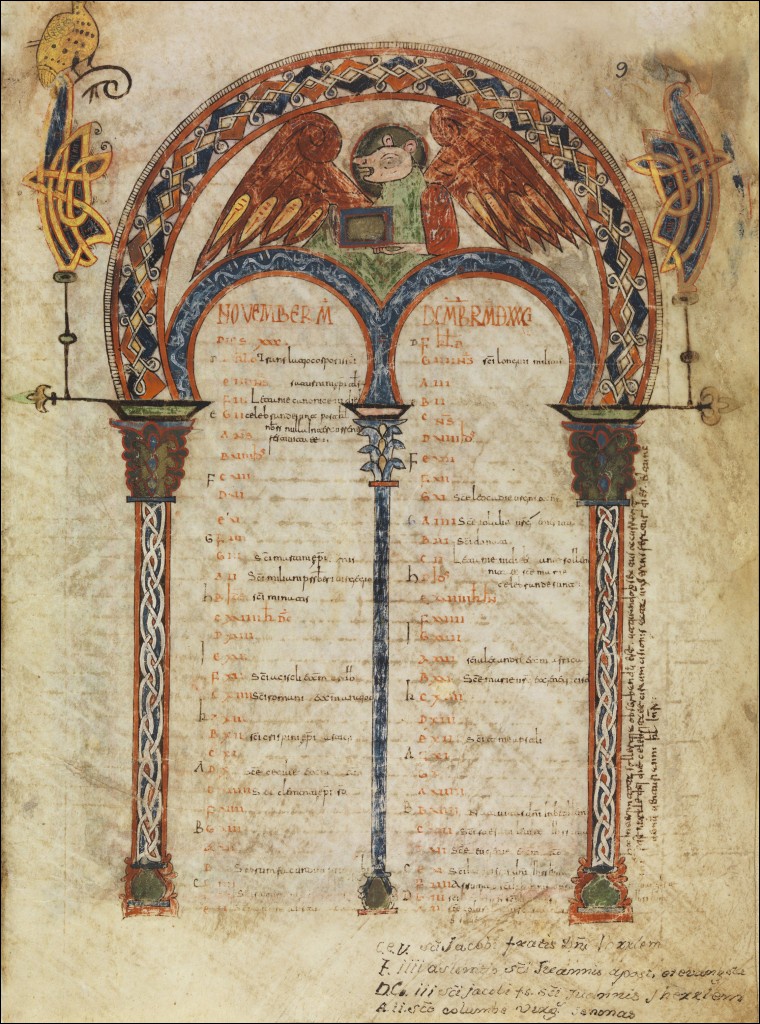 Fols. 28v-306r: Antiphonarium mozarabicum. (It ends abruptly, maybe removing the colophon and a note about the ownership when it changed owner? Was this colophon a model for the epigram and illumination on fol. 1v? ) – dated early (first third) 10th century. 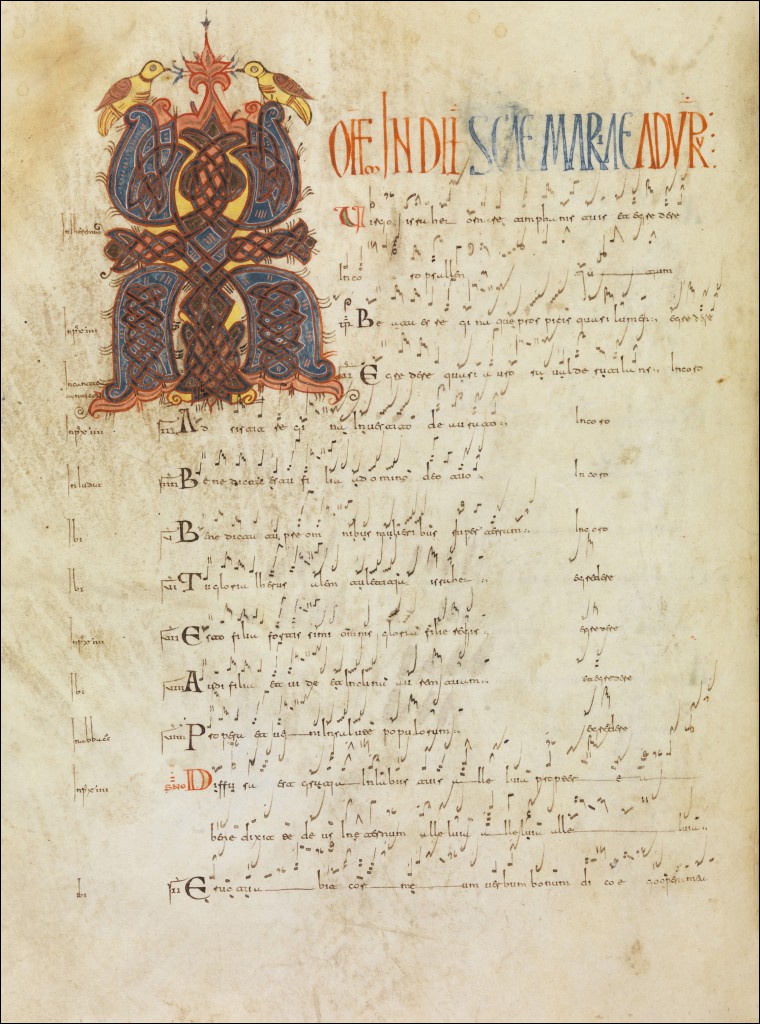 For codicological problems with these contents, the initial plan of the manuscript and additions, see Díaz y Díaz, Incidental Notes. As a reminder, the manuscript was rebound in the 1950s. 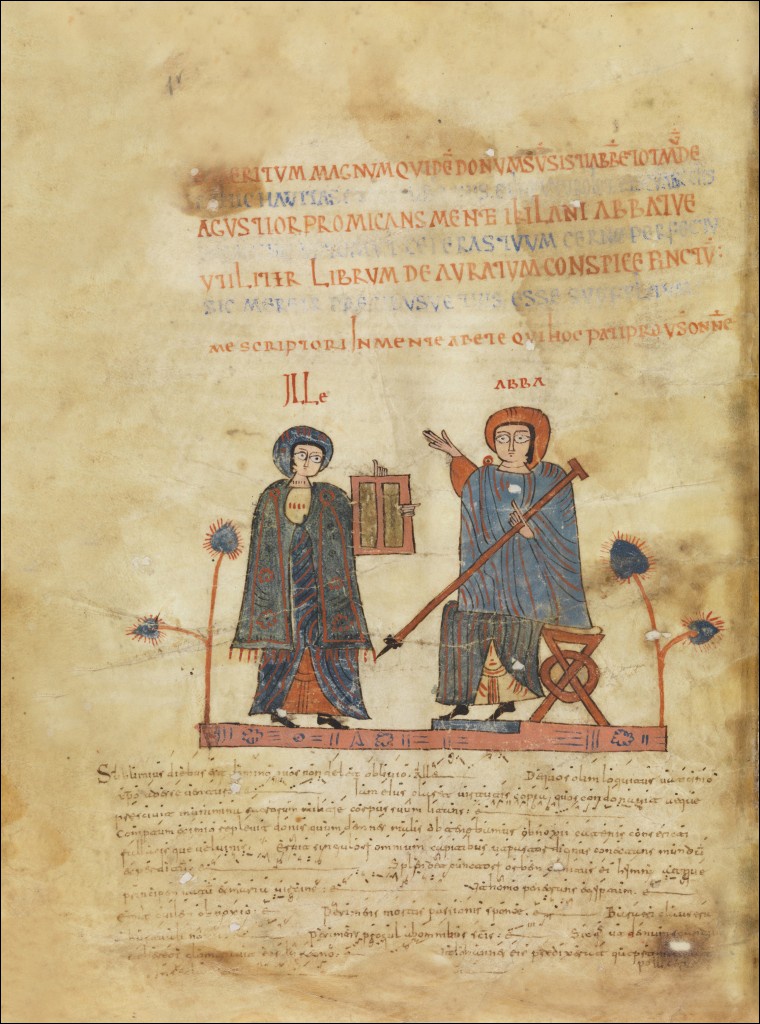 Prologue: One or several unidentified hands (mid-10th century). Fol. 1, including the poem in the verso supposedly written by a scribe called abbot Teodemundo and the illumination which allegedly represents Teodemundo giving the codex to abbot Ikilanus (wrongly identified by traditional scholarship as abbot of León, 917-960 ?¿ depending on the source), was added, thus, after the antiphonary and the general prologue were copied. It is now believed that abbot Teodemundo commissioned to an unknown scribe to write this folio to be added to the codex he already had or maybe, less likely, to compose (i.e. to gather its parts plus the folio) the codex in full, to present it as a gift to abbot Ikilanus, in honor of whom the contents of 1v. – as well as the page tapestry fol. 6r. – were added [2]. In other words, Teodemundo owned the Antiphonary, which was constantly being used since written, maybe adding some folios, and then, once Ikilanus expressed his wish to have it, instructed to add the ‘final touches’ on his honour. 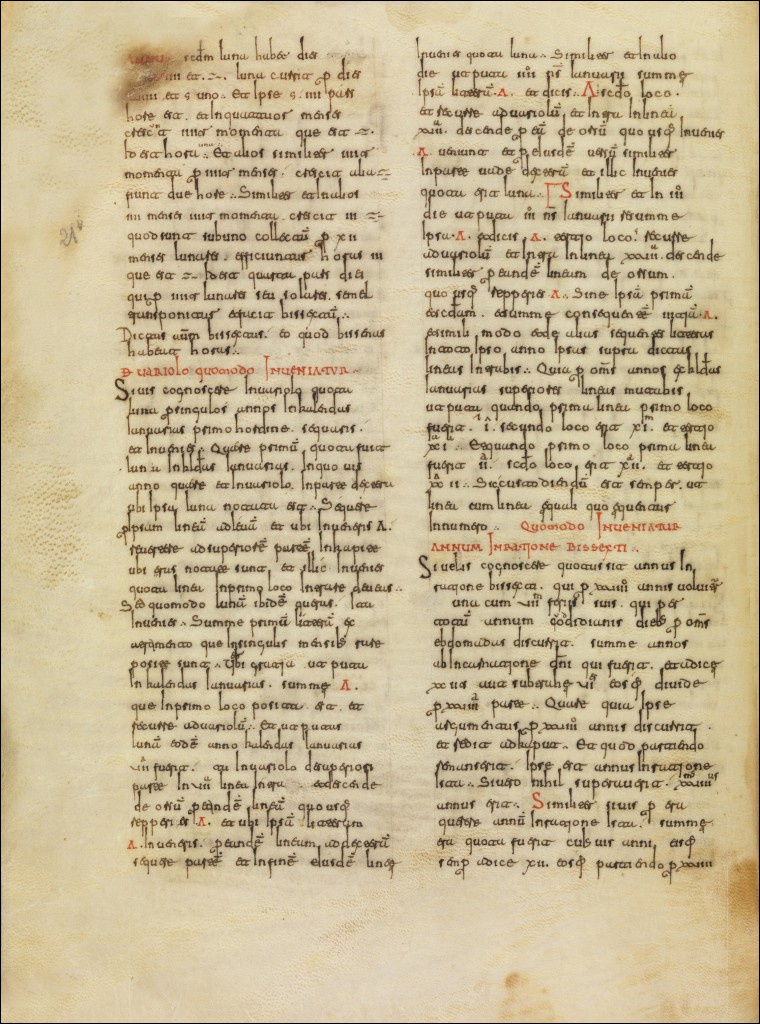 Antiphonarium: One or several? unidentified hands (first third of the 10th century; the neumes were written after the text, superimposed on it, and they perfectly correspond to each other). 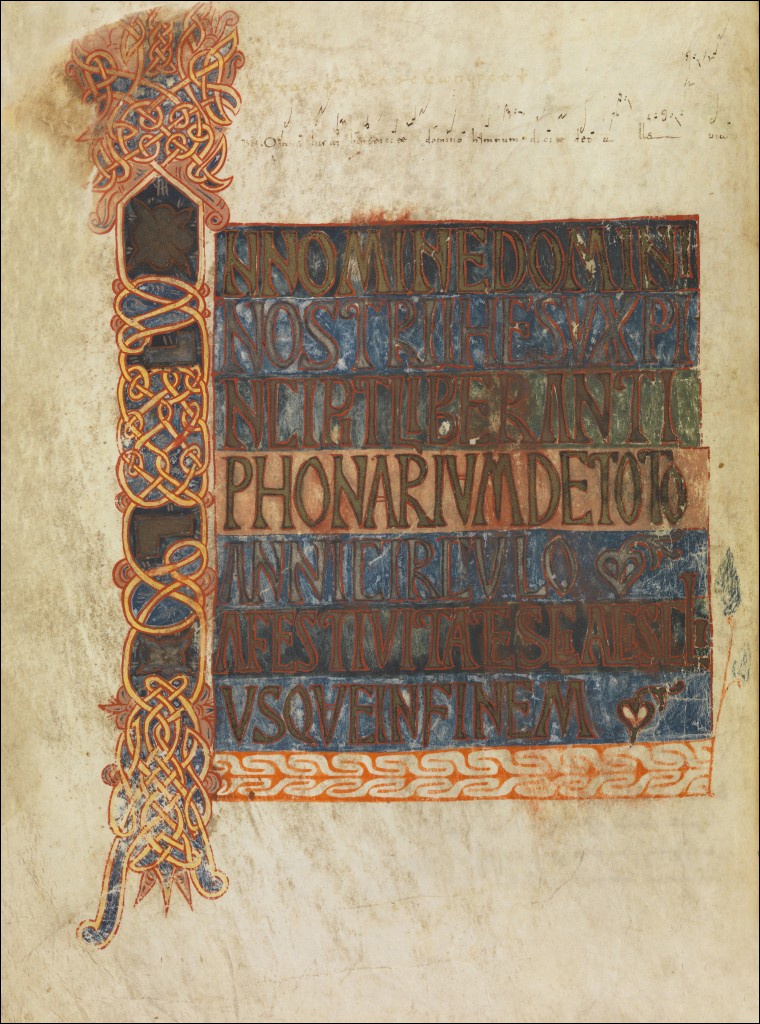 Illuminator/s: unknown. There is no specific program of illuminations drawn for this codex, although it has several, in the usual Mozarabic style. The most important are, besides the one in fol. 1v., the Alpha (fol. 5v), the Cross of Oviedo and the page tapestry Librum Ikilani Abbati (fol. 5v), the ornamented box with ownership mark (fol. 6v), calendar, solar wheels and computation tables (fols. 6v-19v). Initials with anthropomorphic, botanical and lacework motifs and historiated initials.

Origin: The codex was written in the eastern part of the Leonese area.

Context: “The current Antiphonary of León… is a reflection, thanks to the initial texts, of the tensions that the Hispanic Church experienced as a result of the problem caused and supported by Elipandus of Toledo, who Beatus of Liébana and the Asturian Church strongly argued against, as it was asserting itself against Toledo. Theologians in the Carolingian world argued even more strongly against him for various reasons, including, to a large extent, other needs that concerned the world of politics and relations between the Empire and the Church. In the diatribe against Elipandus written by his opponents, there is an evident distrust, and clear insults soon appeared against the Hispanic liturgy that left their mark and would never be forgotten in several key centres of Christendom”. Díaz y Díaz, Incidental Notes, 100. [I wrote a post about the Mozarabic rite here] 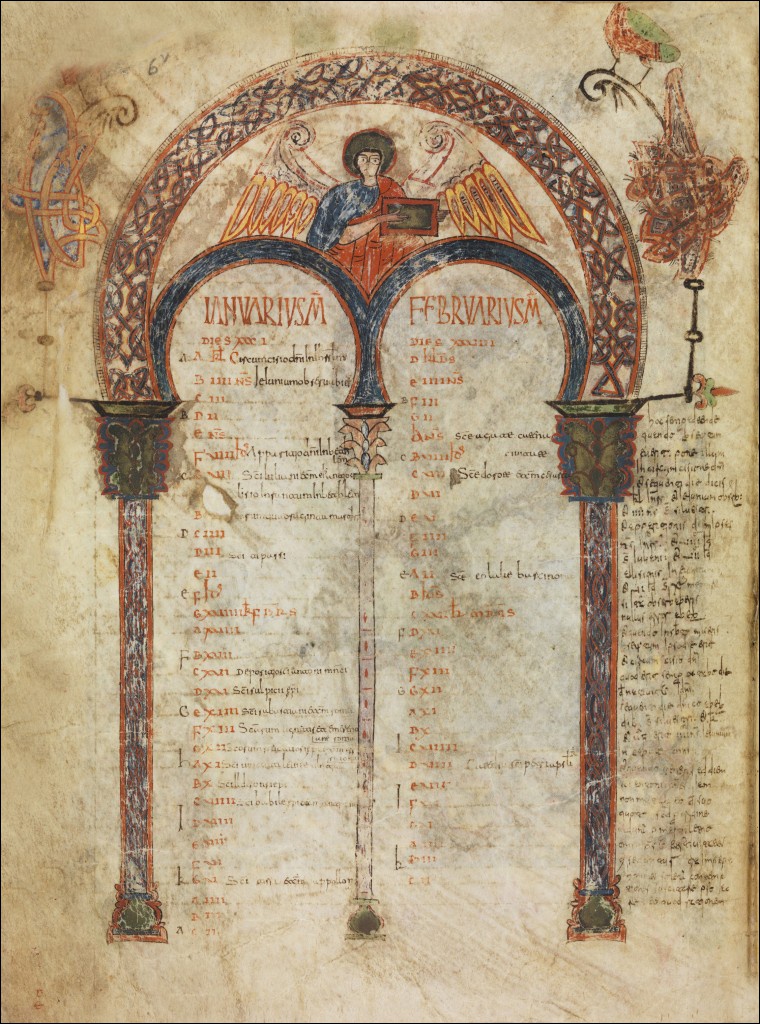 I think this manuscript is a good example of the problems we have on codices written in Visigothic script (you can read a summary here). Until 2007 we all – more or less – believed Leon 8 was written in the mid-10th century by Teodemundo for Ikila. Now we know it was not, as well as that only the third part added by Arias can be accurately dated (mid-11th c.). Thus, the other two parts, the prologue and the antiphonary itself, are supposed from the first third of the 10th c. and the mid-10th c. respectively. Even so, the script of both parts has not been precisely described: Díaz y Díaz dated them by experience. I trust him, he is/was one of the masters, and one can be sure he made a thorough analysis, but I would like to see the facts and not only to believe his “palaeographical eye”. I would like to know what exactly characterises a script made in eastern Leon in those dates to be able to extrapolate the information to other codices.

[2] The poem says: “Very great merit have you obtained with this gift, O Abbot Teodemundo, you who dwell here with your good monks and will in the future revel with the angels. Shining even brighter thanks to your wishes. O abbot Ikilanus! You can now see that what had been your desire is finished; look again and again at the book prepared for use; illustrated and decorated in gold. May I deserved to be helped by your prayers: remember me, the copyist, forever, he who has worked so hard out of respect for your name”.

[update July 2017: If interested in this codex, I recommend you to read Elsa De Luca, “Royal Misattribution: Monograms in the León Antiphoner”, Journal of Medieval Iberian Studies 9/1 (2017): 25-51]

Fantastic info! I’ve been wanting to learn about this book for a long time.

A very interesting codex, indeed. I guess the first part shows the state of the art on lunar calendar computation on north-western iberian peninsula C10th?… I have to read Incidental Notes…

Yes; it also has several notes written during the 10th and 11th on correspondences. You can read ‘Incidental notes’ online (Hispania Vetus is on GoogleBooks).