As some of you may have noticed in my last few posts [see here – hybridisation], I have recently been engaged in studying how Visigothic script developed once Caroline minuscule began spreading throughout the northern Iberian Peninsula. I am interested in understanding how the graphic process of change from Visigothic to Caroline took place, and how scribes reacted to this, more or less, imposed change that had its liturgical parallel in the adoption of the Roman rite in detriment of the Mozarabic one. [* I will soon publish a couple of articles on this topic; if interested, do not hesitate to ask.]

We have a vast number of sources, both charters and codices, which help us comprehend, through the characteristics of the hands who wrote and copied them, what happened in the lapse of time between both writing systems. Moreover, these sources also give us valuable information about how the graphic process developed. It is not just scribes who, writing in Visigothic, started to incorporate features commonly used in Carolingian manuscripts into their own hands, but scribes who stepped aside and continued to use Visigothic script when their colleagues had already moved forward. Speaking about charters, it can be said with certainty that Visigothic script, even in the most remote areas, was no longer in use in the second half of the 13th century. But looking at codices, there are still exemplars such as this ‘Codex of the Month’ that show that Visigothic script was still in use in the 14th century.

Codex of the month (IX): Madrid, Biblioteca Nacional, mss 10110 [FIG. 1] is the last extant codex written in Visigothic script. It was composed in the very particular cultural center of Toledo, characterised by the persistence of the Mozarabic rite and a clear tendency towards archaism. Toledo was the center of the Iberian Peninsula, capital of the Visigothic Kingdom, stronghold of Christianity during the Muslim upheaval, and conscious preserver of what thought had to be preserved of the late Roman and early medieval peninsular culture throughout the centuries.

Leaving aside the script for just a moment, and the exceptional nature of having a 14th century scribe writing in Visigothic script, the text this codex contains is not at all unfamiliar, but rather very common. Madrid, Biblioteca Nacional, mss 10110 is a Breviary of the Mozarabic liturgy, a collection of everything necessary for the daily offices within their proper order, such as psalms, readings, versicles, etc., in just one volume.

Support: Well-preserved parchment (except for f. 109, broken), very thick and not carefully prepared. Some quires include singletons and bifolia that seem to be leftover parchment [FIG. 3]. Modern binding in brown leather, with a label on the back and the title Breviarium quadragesimale Mozarab. MS. 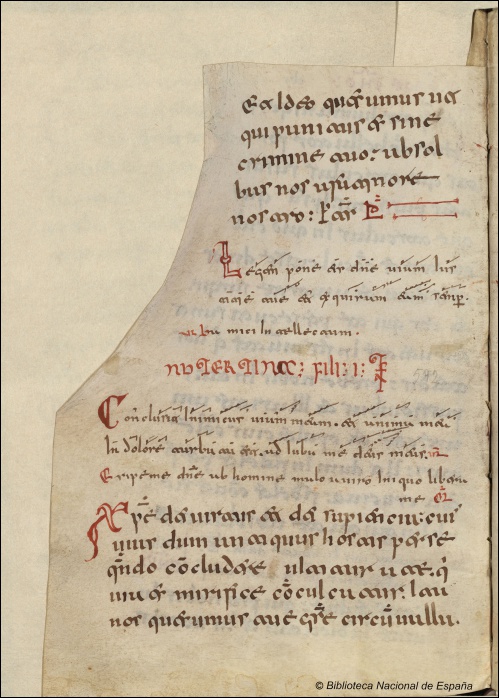 No. of leaves & layout: The codex starts with two folios in a neat modern hand with a summary and some notes about the codex’s collation, then a folio that corresponds to f. 7. Follows 120 ff. (270 x 190 mm) of codex; single column, with different number of lines (19 to 24) since it merges text with chant and musical notation, and the interlinear space is not constant through the manuscript; ruled in dry point and in pen in the last quires [FIG. 4]. Medieval foliation, at the top of each folio, in Roman numerals. 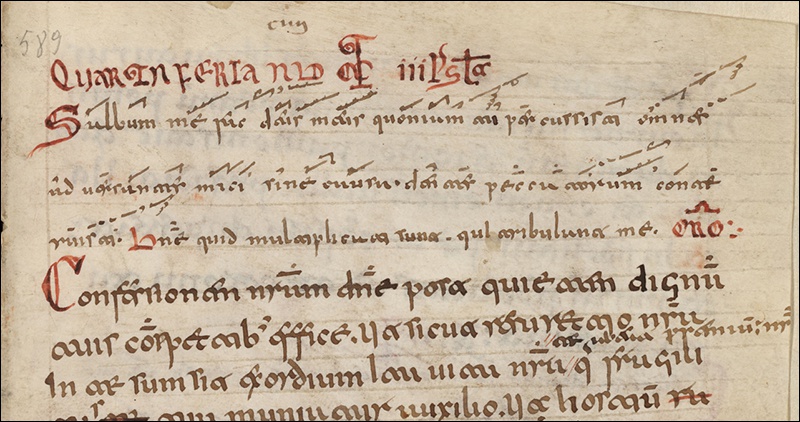 Because of its size and composition, this codex was clearly made to be used.

Copyist/s and script/s: As it is said in the initial pages of the manuscript, it was copied by Fernando Juánez in a Visigothic minuscule script with Carolingian influence in the abbreviation system. His hand is very distinctive; it shows a Mozarabic Visigothic script – take a look at the form of the letter t, which seems like an infinity symbol in this geographical variant of the script -, traced with ease and clarity.

Some strokes of specific letters show the graphic evolution, a Visigothic that was not drawn as it should be. For example: the top of f is almost detached from the descender – it looks like an r with a tongue at the top – making ligatures easily; the letter i tends to have diacritic mark; q is traced as a 9; the letter r has its characteristically Visigothic pointed top drawn in two different pen strokes. The same copyist added rubricated titles for each section of the codex, and initials mixing Half-uncial, Visigothic, Carolingian, and Gothic allographs alike – as was usual for the period.

The codex has very interesting notes in Visigothic minuscule and in Gothic cursive that seem to be coeval if not by the same hand. 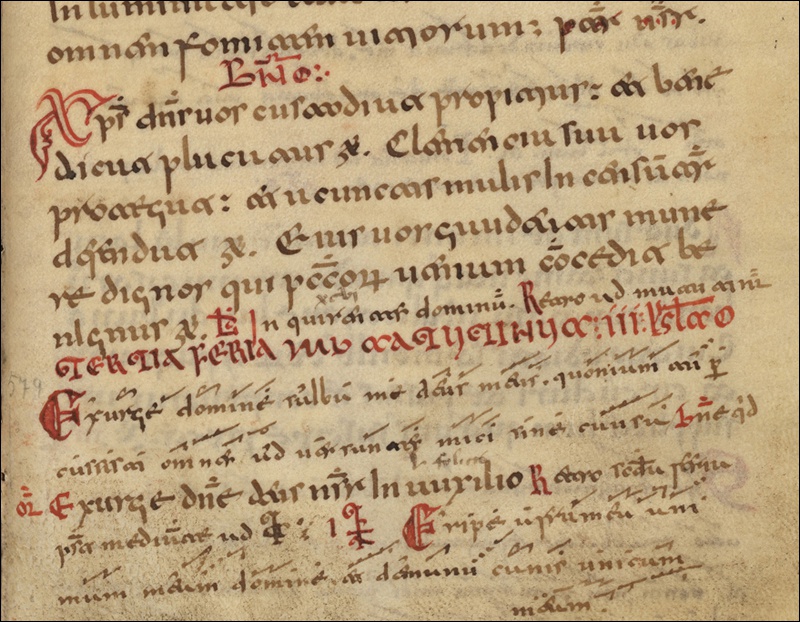 Illuminator/s: The codex does not have illumination.

Origin: As noted in the initial folios of the codex and in f. 120v, Fernando Juánez was a presbyter in the Toletan parish of St Justa and Rufina.