Saint Isidore, Bishop of Seville (c. 560-636), was the outstanding intellectual figure of Visigothic Iberian Peninsula and one of the most important links between the classical world and the Middle Ages. He was born in Seville, where his parents arrived from Cartagena fleeing the internal conflicts between Arians and Catholics that took place c. 550 in that area. Three of his brothers were also intellectuals: Leander, bishop of Seville (c. 579-602), Fulgencio, bishop of Écija (c. 603/10-619), and Florentina, abbess of an unknown monastery for whom Leander composed his Regula (Codex of the month (VI): Paris, BN, NAL 239; the ‘Codex of the month’ series is available here).

Isidore was educated by his brother, Leander, in Seville (c. 579), to whom, after his death, he replaced as bishop. From Isidore we know of his participation at the II Council of Seville (619) and the IV of Toledo(633), and about his wide literary production ranging from biblical exegesis to works for the regulation of clergy, defense of the Catholic faith and instruction in the orthodoxy of Christianity, to historical works as De uiris illustribus. Isidore’s most famous works, widely spread during the Middle Ages, were the Sententiae, the Synonyma, and, especially, the Etymologiae.

Isidore’s Etymologiae, considered the encyclopedia of the Middle Ages par excellence, contain a vast number of definitions and explanations relating both to the different fields of human knowledge and to the living beings and objects of daily life. Isidore drinks from the Roman encyclopedic tradition, exemplified by Varro -through Martianus Capella and Cassiodorus- and Cato the Elder, which brings together with works of Christian (Augustine of Hippo, Saint Jerome, Lactantius and Gregory the Great) and pagan authors (Festus and Servus) alike, highlighting the author’s interest to preserve the knowledge of antiquity. The Etymologiae are organised into 20 books, the first ones summarizing the seven liberal arts; grammar, dialectic, rhetoric, geometry, arithmetic, astronomy, and music. It is completed with synthesis on medicine, law, chronology, church organization (festivals, books and history of Christianity), religious and civil institutions, and an overview about the world and the beings, minerals and objects that populate it.

This is a composite codex; it gathers two different codices: 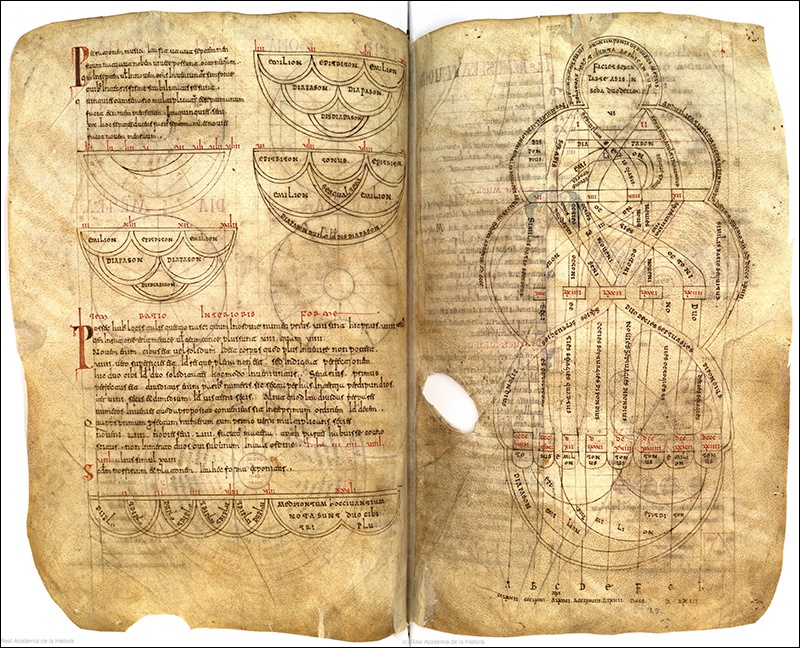 *Between fol. 80 and 81, during the restoration of the codex, a folio was added. The first part of this work ends in fol. 80, and thus this quire is a binion. 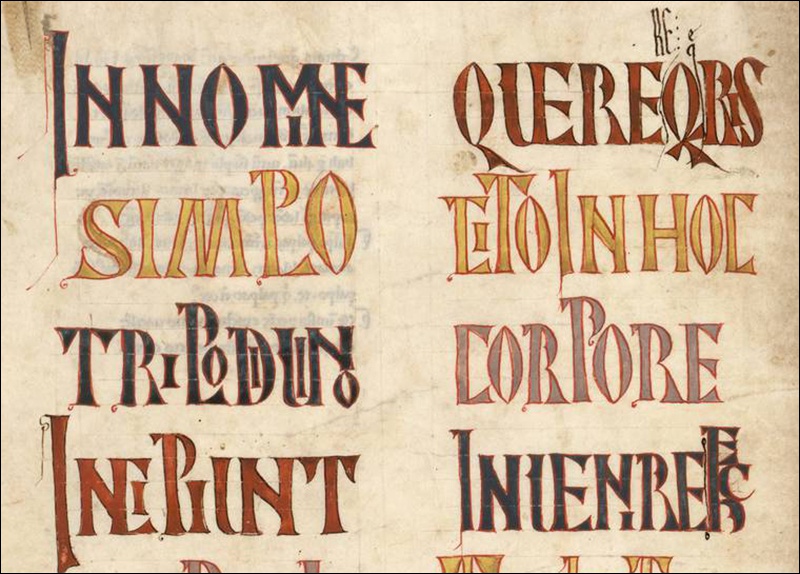 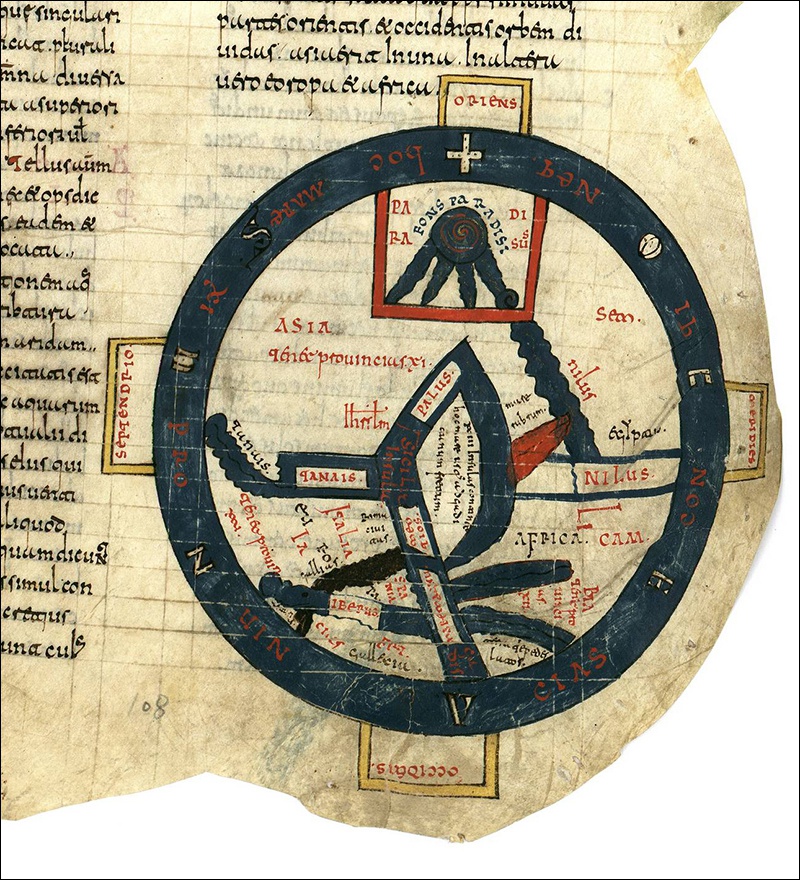 The second part, fol. 160-162 (lacking some final folia), is another copy of Bede’s De cello… with some modifications. It results in a very sloppy version made by a different scribe (changes in the abbreviation system). This addition must have been made at an early time since it continues the medieval numeration of the codex, and a note from the 16th century alerts the reader of its repetition (Haec quae sequuntur iam apposita pag. CLXIIII).

Medieval foliation in Roman numerals and modern foliation by pencil, with Arabic numerals.

Copyist/s and scripts: As it is said in the colophon of the manuscript, fol. 159v, part I was copied by Endura presbiter and Didaco diaconus in a Visigothic minuscule script with Carolingian influence (change between scribes on fol. 80v-81r). It has been differentiated another scribe copying the last folia of part I, fol. 109-159. Part II (fol. 160r-162) was copied by another hand, which Díaz y Díaz attributes to the same production center and, also, the mid-10th century. The manuscript has emendations in Cortesana script. 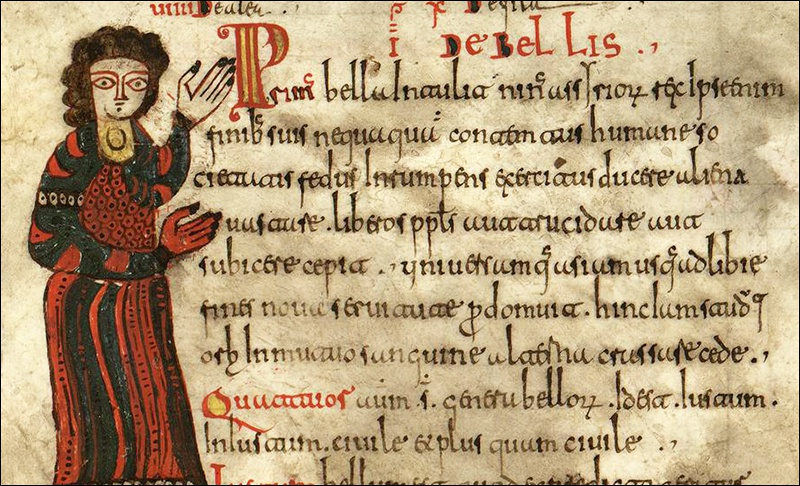 Illuminator/s: unknown. Part I: Littera notabiliores decorated with zoomorphic and geometric motifs. Initials in blue and yellow. Part II: First words of each chapter in red and poorly developed initials.

Origin: According to Díaz y Díaz and Millares this codex should have been made at the monastery of San Pedro de Cardeña (Burgos).

Provenance: The manuscript arrived at the Real Academia from the monastery of Cardeña after the expropriation of 1835.

Context: Isidore’s Etymologiae was widely distributed throughout the Middle Ages, being a model for later encyclopedias. There are many extant copies in Visigothic script (check the Catalogue here).