In the last #ERCproject update, I wrote about the project’s first output: a comprehensive database of medieval Galician charters. I discussed from where the idea to do it came from, how it began, developed, and the information you will eventually find on it once it goes open. I also shared some initial numbers about how many sources we’ve found (documents preserved as single sheet documents or copies in cartularies). After sharing some initial results for the diocese of Lugo, Tuy, and Orense, in this post I would like continue with some notes about Mondoñedo’s.

[brief note: What is a “document”? A document is a text preserved as a single sheet of parchment (charter), as an original document or as a copy of it, or as a copy in a diplomatic codex. In our database, we consider “document” a manuscript of either category but only once. Meaning, if a document X is preserved as original charter, as a copy also in a charter and as a copy in one, two or more diplomatic codices, for us it’ll be just one item. Of course, we’ve added a note in each case with all the references.]

North of Lugo, detached from it in the mid-9th century, the diocese of Mondoñedo is, to me, the oddest of all Galician dioceses in terms of its documentary production and conservation, albeit with a strong historical tradition, an important see, central monasteries (still largely unknown) and comings and goings that make us find a bit of everything.

Ecclesiastic and royal diplomas granted to the see, more likely produced in there, are kept in the cathedral archive and in the National Library in Madrid. After that, we need to focus on the monasteries.

First of all – I’m not being objective, I just love all about this monastery – we should talk about the monastery of San Xoán de Caaveiro; one of those extensively studied but about which there are still so many questions to answer it seems a new monastery every time I look into it… The diplomatic collection of this centre is mostly gathered in the institution’s Tumbo, now in Madrid. There is also a really amazing collection of cartularies from Caaveiro about which I will talk about in the future, extensively (sorry), and some single-sheet charters. In any case, the number of documents comes to a total of almost 200.

Following up, San Salvador de Villanueva de Lorenzana, a 10th-century family-founded monastery a few kilometres far from Mondoñedo and with 167 extant documents (tumbo) prior to 1200.

Finally, San Martín de Jubia, which, through its 134 documents also preserved in tumbos, offers an open window to the gruesome history of a family-founded monastery that, despite royal support and perhaps as a result of pressure from neighbouring monasteries, was known by a long history of breaches of religious compliance.

Those three plus some documents from minor centres bring the total for the diocese to 517 documents.

Almost all Galician tumbos have been edited. As a result, all but around 20 documents of this diocese are published.

As in Orense due to Celanova’s tumbo, most of the diplomatic sources from this diocese are preserved as copies, with only a small number of original charters, grouped in the second half of the 12th century. 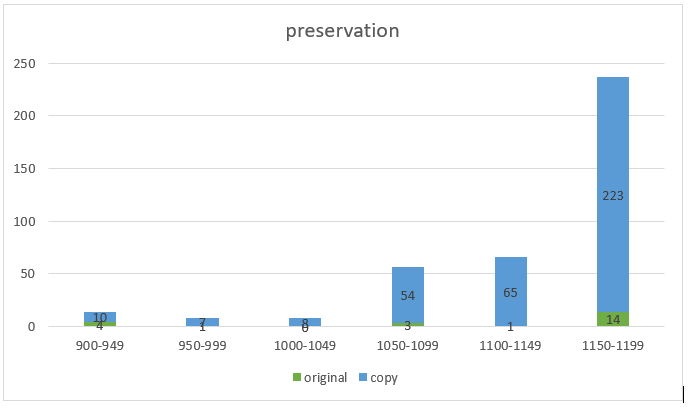 Following the same dynamics observed so far, most of the documents preserved are ecclesiastic, thus leaving their study outside the scope of the project. But there also around 20 lay charters (mostly second half of the 12th century) made for common people outside the elites that will be thoroughly studied in the project. 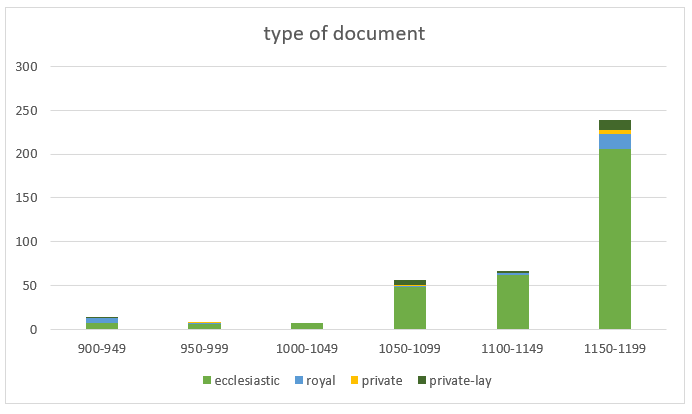 If we take a look at the type of document in relation to its legal action, it is significant to note that, above all, the type of document recorded are donations, in clear contrast to what we have seen so far. Also significant are testaments, which were very few in the other cases. Inventories are common since the first half of the 11th century, more likely because all the institutions analysed have quite early foundations. The number of documents about conflicts registered is also significant in the diocese, increases in the second half of the 11th century, due to the fierce competition between monasteries bordering each other. 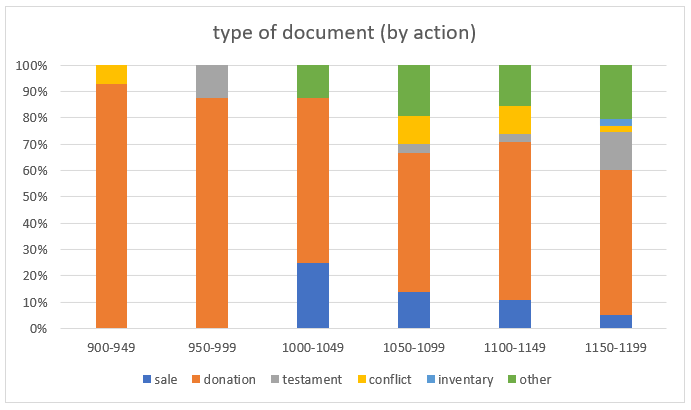 Since most documents were produced in the 12th century, the majority are in either Protogothic or Gothic cursive scripts. Original documents in Visigothic minuscule and Caroline minuscule scripts are there, but they are a minority.

Another (the last!) diocese next month. Thanks for reading!