In the last #ERCproject update, I wrote about the project’s first output: a comprehensive database of medieval Galician charters. I discussed from where the idea to do it came from, how it began, developed, and the information you will eventually find on it once it goes open. I also shared some initial numbers about how many sources we’ve found (documents preserved as single sheet documents or copies in cartularies). After sharing some initial results for the diocese of Lugo and that of Tuy, in this post I would like continue with some notes about Orense’s.

[brief note: What is a “document”? A document is a text preserved as a single sheet of parchment (charter), as an original document or as a copy of it, or as a copy in a diplomatic codex. In our database, we consider “document” a manuscript of either category but only once. Meaning, if a document X is preserved as original charter, as a copy also in a charter and as a copy in one, two or more diplomatic codices, for us it’ll be just one item. Of course, we’ve added a note in each case with all the references.]

We are back to the model of written practices seen in Lugo with a small but quite significant variation: Orense is the diocese in which the monasteries, and quite old ones at that, played a central role in the production and also in the preservation of documents. Of course, we do have charters in the cathedral archive produced in the cathedral, but the vast majority of them were not so and are not related to the see but to the many small monasteries that populated Orense, came to be absorbed by major centres and, eventually, by the see itself. As it is, 161 charters are currently kept in the cathedral archive, 115 of them of diverse monastic origin (San Clodio do Ribeiro, San Esteban de Ribas de Sil, San Vicente de Pombeiro, Santa Cristina de Ribas de Sil, among others).

Written production in Orense is really about a single monastery: second to none, San Salvador de Celanova. Founded in 936 by none other than San Rosendo, bishop of Mondoñedo, abbot, nobleman, right-hand man of kings and THE VIP of 10th-century Galicia. We have 604 documents from Celanova in our database, some preserved as single-sheet copies in the National Archive in Madrid but most of them coming from the Tumbo, also in Madrid. It took us a while to list them all. This collection of documents from Celanova is not only important for its number but also for the exceptional richness of the contents related in the documents, which reconstruct the reality of rural Galicia in the first centuries of the Middle Ages with a extraordinary level of detail (and social plurality).

Due to Celanova’s extraordinary corpus, almost all documents from this diocese have been edited, with only some 97 from that total of 937 that remain unedited.

Since most of the extant documents for this diocese come from Celanova’s Tumbo, most of them as well are preserved as copies. Originals, some in need of further revision, have been preserved for the second half of the 12th century, since, as already noted, that is when written production greatly increased. 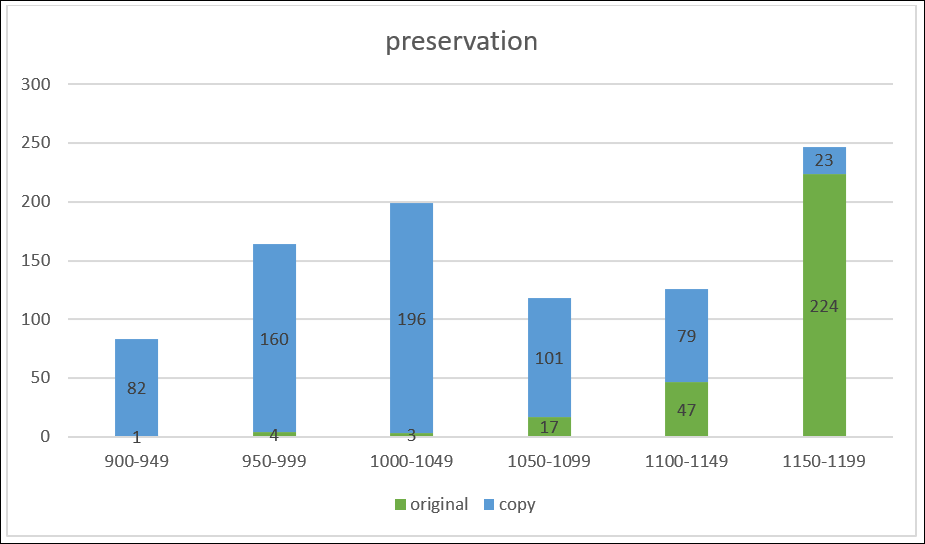 Following the same dynamics observed so far, most of the documents preserved are ecclesiastic in nature (coming as second the royal diplomas, in a higher number than in the diocese of Lugo), thus leaving their study outside the scope of the project. But there are also 110 lay charters made for common people outside the elites that will be thoroughly studied in the project.

If we take a look at the type of document in relation to its legal action, it is significant to note that the number of sales seems to be focused before the second half of the 11th century, changing the dynamics in favour of donations thereafter. Inventories concentrate on two specific periods: the first half of the 11th century, most likely as a way of strengthening the first stage of monastic growth, and the first half of the 12th, perhaps as a consolidation of the properties received once the distribution of land was more or less set. It is also striking the large number of documents that go beyond the traditional typologies, such as letters of freedom of serfs, establishment and resolution of agreements, payment of debts or payments in compensation for services rendered. It will be interesting to see what conclusions this information leads us to as we progress through the project. 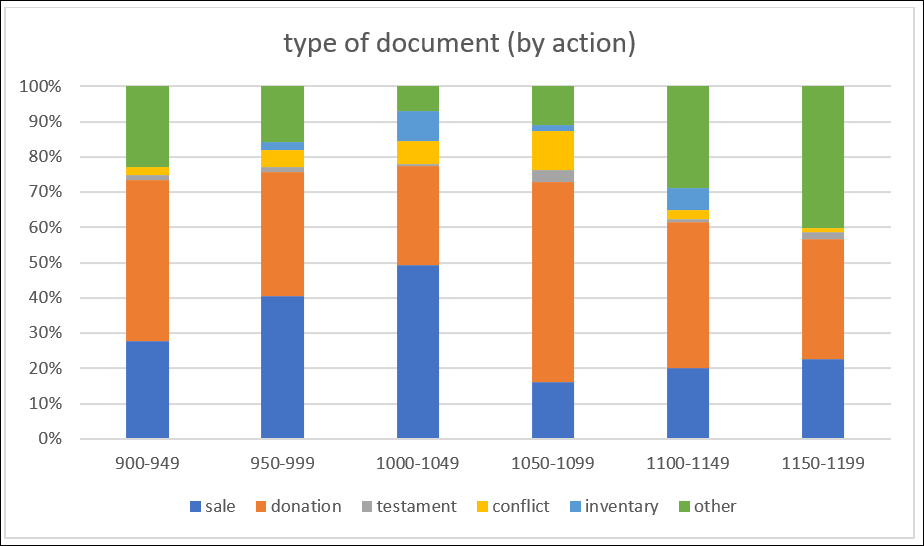 Since most documents were produced in the second half of the 12th century, the majority are in either Protogothic or Gothic cursive scripts. Original documents in Visigothic minuscule and Caroline minuscule scripts are there, but they are a minority. If we compare the chart about types of scripts in Lugo and here, we can appreciate a lower percentage of preservation of Visigothic script originals and a higher variation in writing systems used in the second half of the 12th century, with a balance between Caroline minuscule and Gothic scripts. 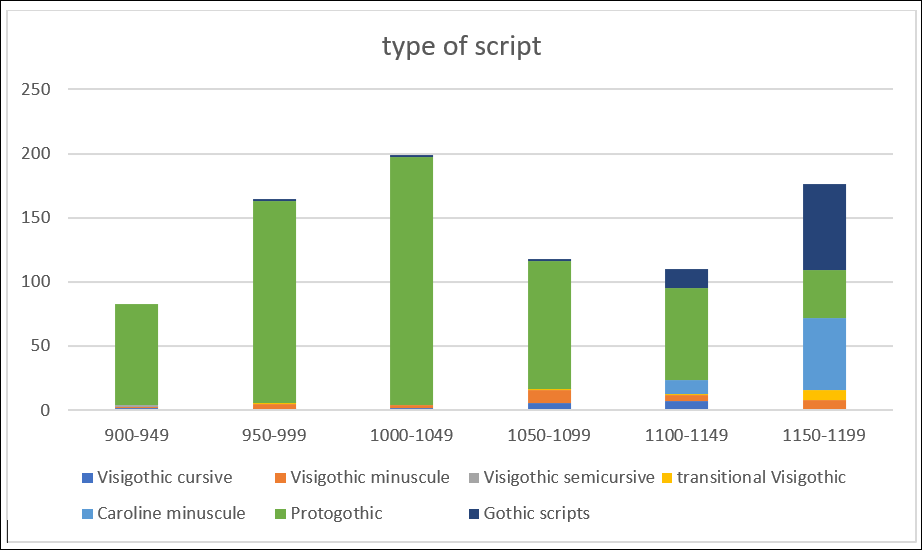