This post is dedicated to all of those who read the last ones and wanted to know more. Thank you for your support.

In the last #ERCproject update, I wrote about the project’s first output: a comprehensive database of medieval Galician charters. I discussed from where the idea to do it came from, how it began, is being developed, and the information you will eventually find on it once it goes open. I also shared some initial numbers about how many sources we’ve found (documents preserved as single sheet documents or copies in cartularies). After sharing some initial results for the diocese of Lugo, Tuy, Orense, and Mondoñedo it is time to finish this series with the remaining diocese: Santiago de Compostela. We will move forward to other exciting updates soon :)

[remainder: What is a “document”? A document is a text preserved as a single sheet of parchment (charter), as an original document or as a copy of it, or as a copy in a diplomatic codex. In our database, we consider “document” a manuscript of either category but only once. Meaning, if a document X is preserved as original charter, as a copy also in a charter and as a copy in one, two or more diplomatic codices, for us it’ll be just one item. Of course, we’ve added a note in each case with all the necessary references.]

If you are reading this, you know what Santiago de Compostela means in terms of written production. It was, and is, not only a see, but an archdiocese, nowadays that of Galicia although in mediaeval times it had an eye quite far beyond. Santiago’s central office was clearly ruled by bishops-archbishops who perfectly understood the importance of writing, of having written testimony of everything the see had (and wanted to absorb), and as a result manuscript production exploded quite since the beginning. It is and was a see focused on pilgrimage, on growing (as fast as possible), and with clear political interests linked to the consolidation and reinforcement of the monarchy in its area of influence further west of the peninsula. The history of Santiago is irremediably linked to bishop Xelmírez and to Alfonso Raimúndez, a history full of confrontations, political alliances, ambition, and many documents that record all this. Santiago’s very busy group of ecclesiastic-cathedral scribes worked untiringly in producing diplomatic codices, Tumbos A, B and C, and single-sheet copies of which very few have been preserved. Our total lists 253 documents from between 900 and 1199.

Santiago’s cathedral was, though, not alone in Santiago’s medieval city. As any other cathedral freshly built, it relied on those nearby monasteries which helped in ruling the see:

The monastery of San Paio de Antealtares is the oldest of the city, founded around 820-830 with the mission to guard and organise the cult of the apostolic relics, which it did until Xelmírez’s change of mind in the 12th c. It moved from place several times, but it still exists as the most relevant nunnery in Galicia. Extant medieval documents from this centre are quite few, only 8 in total.

The monastery of San Martín Pinario is, with San Paio de Antealtares, the Compostelan monastery linked to the beginning of the cult and custody of the tomb of Santiago el Mayor. It was also successively moved outside the walls of the basilica to allow its extension to its current place. Extant medieval documents from this centre are quite few, 16 (plus 4 of its dependant monastery of Montesacro), but it holds an impressive historical archive which is worth a visit.

Outside the city, there were also some monastic institutions who developed a significant written production:

First comes the monastery of Santa María de Sobrado dos Monxes, founded in the mid-10th c. and linked to the House of Traba, with 931 documents, single-sheet charters and Tumbos.

Finally, the Benedictine monastery of San Lourenzo de Carboeiro, founded in the 10th c. and abandoned in the 19th, with 65 single-sheet documents.

Surprisingly, and although almost all Galician tumbos have been edited, there are still around 200 documents unedited (single-sheet charters).

Most of the diplomatic sources from this see are preserved as copies, with a reduced number of original charters, grouped in the second half of the 12th century. 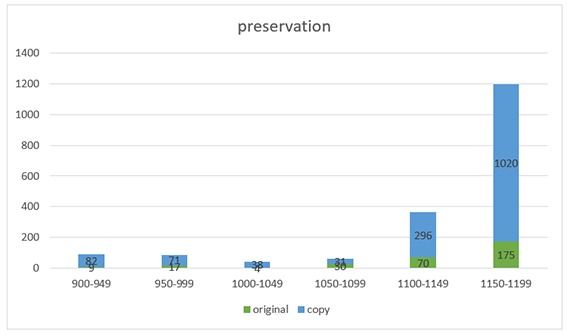 Following the same dynamics observed so far, most of the documents preserved are ecclesiastic, thus leaving their study outside the scope of the project. But there also around 77 lay charters (mostly 12th century) made for common people outside the elites that will be thoroughly studied in the project. 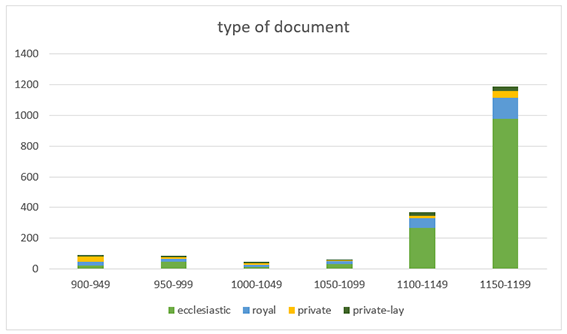 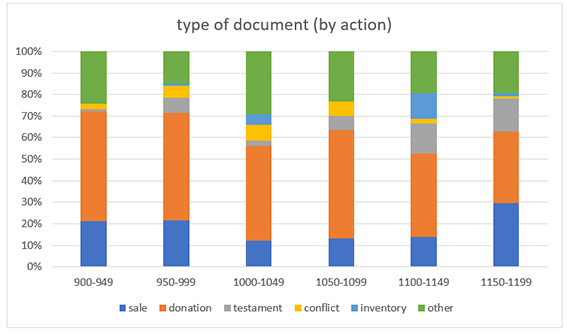 Since most documents were produced in the second half of the 12th century, the majority are in Gothic cursive scripts. Original documents in Visigothic and Caroline minuscule (only 10!) scripts are there, but they are a minority. 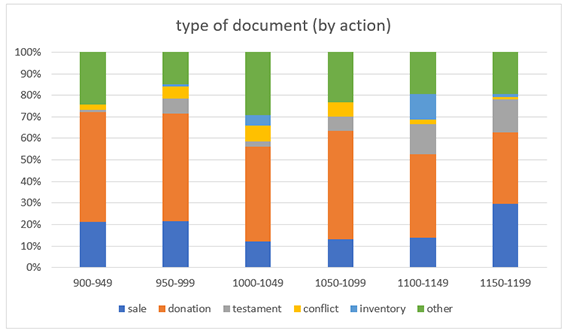