In the last #ERCproject update, I wrote about the project’s first output: a comprehensive database of medieval Galician charters. I discussed from where the idea to do it came from, how it began, developed, and the information you will eventually find on it once it goes open. I also shared some initial numbers about how many sources we’ve found. After sharing some initial results for the diocese of Lugo, in this post I would like to continue with some notes about Tuy’s.

[brief note: What is a “document”? A document is a text preserved as a single sheet of parchment (charter), as an original document or as a copy of it, or as a copy in a diplomatic codex. In our database, we consider as “document” a manuscript of either category but only once. Meaning, if a document X is preserved as an original charter, as a copy also in a charter and as a copy in one, two or more diplomatic codices, for us it’ll be just one item. Of course, we’ve added a note in each case with all the references.]

In clear contrast to what we have seen in the diocese of Lugo, the vast majority of the documents preserved for this diocese do not belong to (or, in fact, are kept in) the Cathedral of Tuy but to the monasteries in the area due to the former’s late foundation. In the cathedral archive there are only 15 documents, all but two royal diplomas. The monasteries are therefore essential here to know what was going on in this area of Galicia, how many documents have been preserved, their content, context, and peculiarities.

The most important diplomatic collection in this sense is that of the Cistercian monastery of Sta María de Armenteira, founded in the late 12th century, with some 60 extant documents, all of them preserved as single-sheet copies in the National Archive of Madrid.

In second place comes the collection belonging to the monastery of Sta María de Oia, also from the 12th century and Cistercian, with 49 documents, again single-sheet copies now in Madrid. (There’s a Tumbo -diplomatic codex- from this institution that we haven’t revised yet for being a 18th-century manuscript)

Next, we have the monastery of San Pedro de Vilanova de Dozón with a total of 31 documents, all of them preserved as single-sheet items and mostly kept in the National Archive of Madrid but also scattered (Arquivo Histórico Universitario de Santiago de Compostela and Arquivo da Catedral de Ourense).

Finally, we have some smaller institutions still with a documentary record prior to the year 1200, such as the monastery of San Xoán de Poio, San Salvador de Lérez and the parish church of Santalla de Artoño, which brings the total for the diocese to 168 documents.

Surprisingly, 123 of the 168 documents of this diocese – original charters, and single-sheet copies of them – are still unedited!! (note: Armenteira’s collection has been studied in two undergraduate theses we haven’t been able to revise yet due to the pandemic).

Considering that all main production centres in this area come from the mid-12th century, it is no surprising that the sources focus in that period and that they are mostly originals; it was then when written production greatly increased due to the maximum need on the part of the institutions to welcome and order their goods. 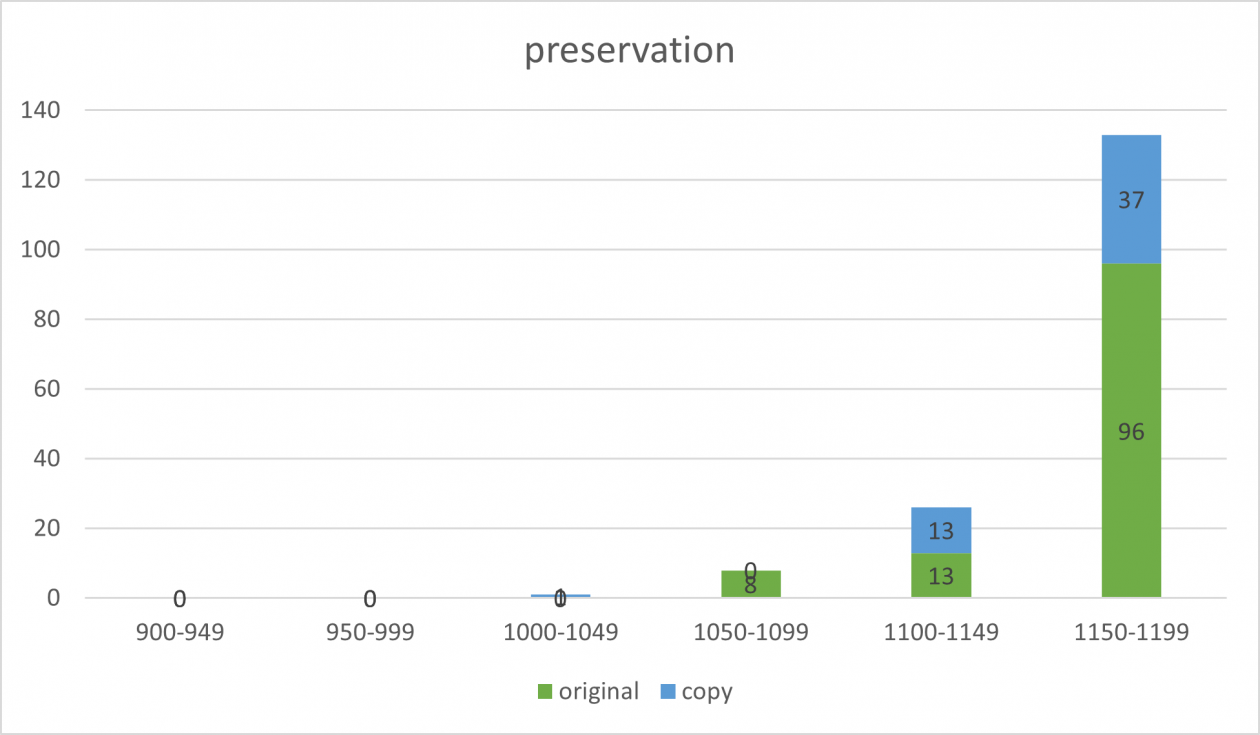 Following the same dynamics observed in Lugo, most of the documents preserved are ecclesiastic in nature, their study then outside the scope of the project. But within that total of 168 items, there are also lay charters; 28 documents that, significantly, fall within the private and lay category, that is, made for common people outside the elites. We haven’t found any private document in this category, something we should revise and aim to place in context. Another aspect that results significant, comparing Lugo’s and Tuy’s collection, is the higher percentage of royal diplomas preserved for this latter diocese, which is undoubtedly explained by the strong support the reorganisation of the see had by the kings. 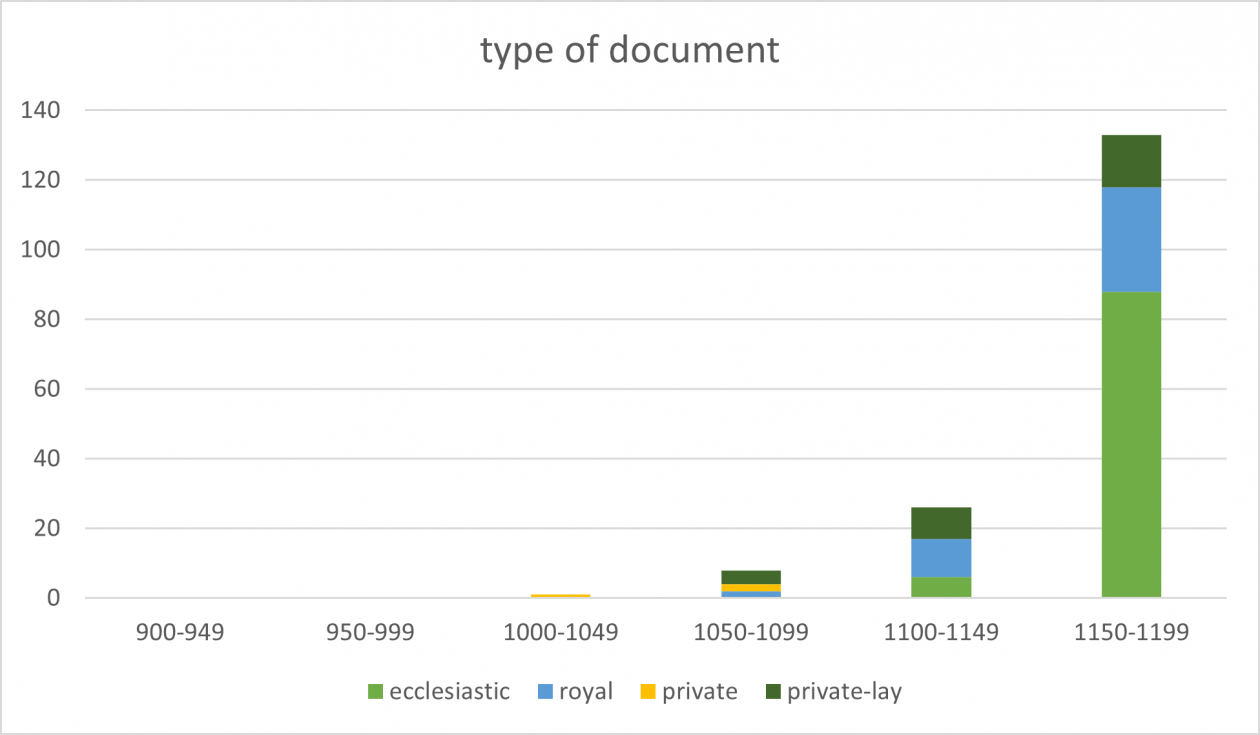 If we take a look at the type of document preserved by legal action, there are some aspects that deserve a deeper reflection. For example, there is a significant increase in donations over sales and of charters recording testaments (granting properties to monasteries), in contrast to the usual trend observed in Lugo. In addition, there is a significant lack of inventories, quite frequent in other areas. Both facts could be explained by the founding date of Tuy’s main ecclesiastic institutions and by the fact most were Cistercian, building their area of influence at a higher rate than in other more traditional areas, with the elites’ support and with no need for inventories as there was nothing to list yet. Although it is not seen in the graphic below, there is another aspect of interest. Within the group of “other” types of document, there is a significant number of agreements between institutions or between an institution and a lay agent in relation to the configuration of territories which could also be explained by the pace at which institutions grew and to their characteristics. 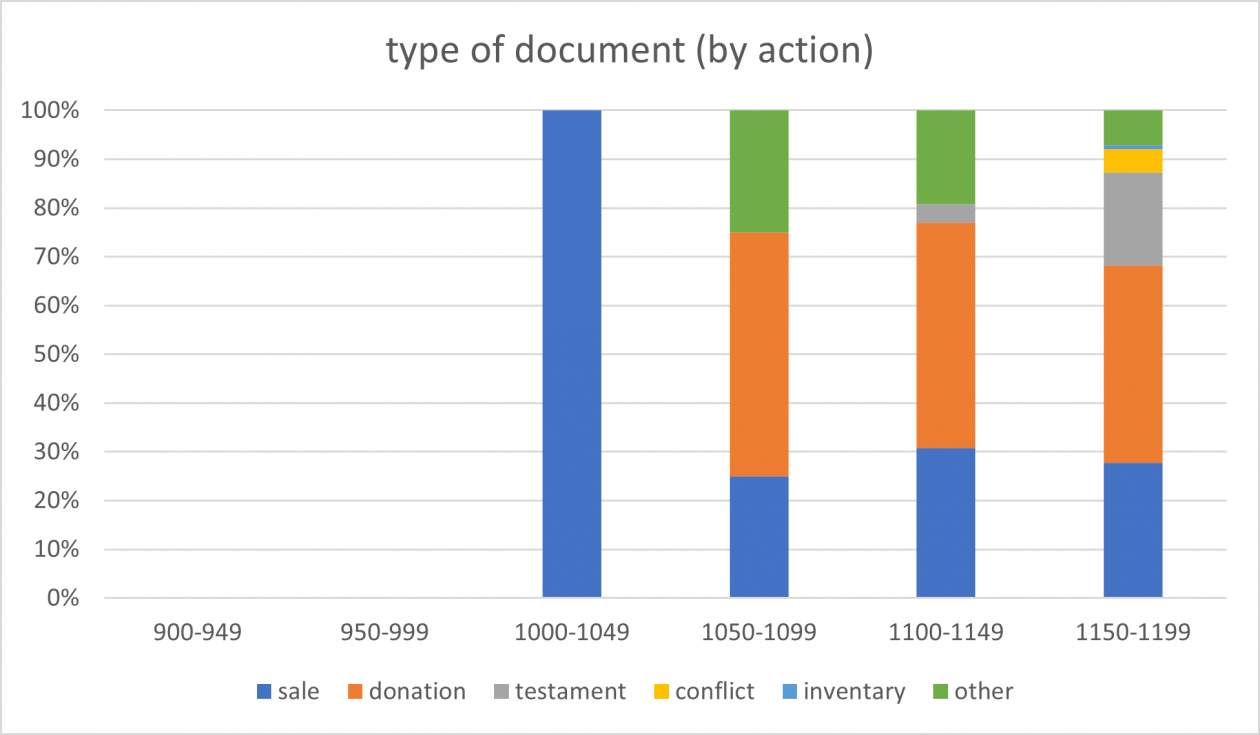 Since most documents were produced in the second half of the 12th century, the majority are in either Protogothic or Gothic cursive scripts. Original documents in Visigothic minuscule and Caroline minuscule scripts are there, but they are a minority. If we compare the chart about types of scripts in Lugo and here, we can appreciate the difference in the first half of the 12th century, with a higher percentage of Gothic scripts over Protogothic. However, the numbers for the second half of the same century are almost identical. 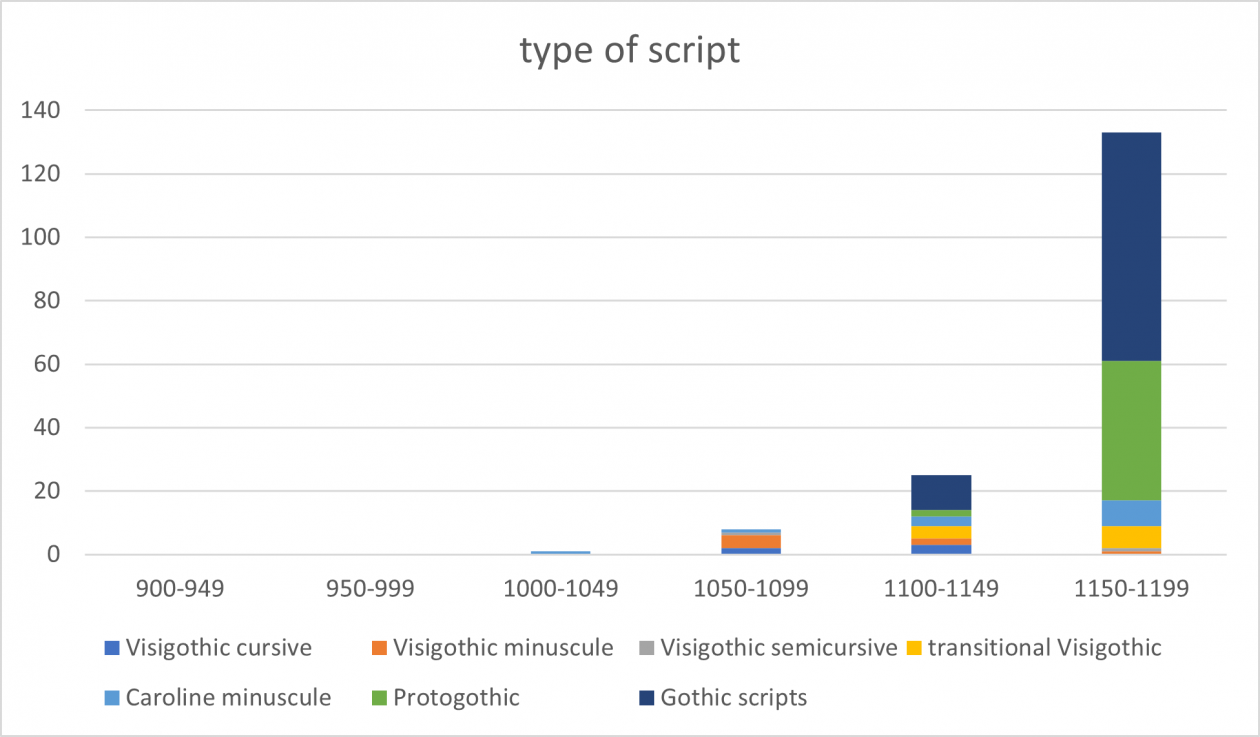