How to place a manuscript within its correct historical and cultural context?

I know I have yet to write about the political implications of the Visigothic script examples in transition to Caroline minuscule script, continuing my last series of posts (it is being a little bit difficult to condense all this information…), but, in the meantime, I would like to share with you a new path to collaboration recently opened. One that I have been badly looking for so far: I have found an Arabic palaeographer!

A couple of weeks ago Dr Arianna D’Ottone sent me a link to one of her excellent articles, ‘Al-khaṭṭ al-maġribī et le fragment bilingue latin-arabe Vat. lat. 12900. Quelques observations’, a chapter from the book Les écritures des manuscrits de l’Occident musulman. Journée d’études (Rabat, 29 November 2012) published last November. On this work, Dr D’Ottone makes a thorough analysis of a fragment actually kept in the Vatican city which contains, in a bilingual copy organised in two columns, part of the Epistolae ad Galatians (Latin version on the left side, Arabic on the right). As an Arabist, Arianna’s attention is focused on the Arabic text.

Because life is like that sometimes, it happens that last December, while I was surfing the Net, I found the exact same fragment in Archive.org (Specimina codicvm latinorvm Vaticanorvm, F. Ehrle and P. Liebaert, 1912) which I tweeted. Now I have better pics: 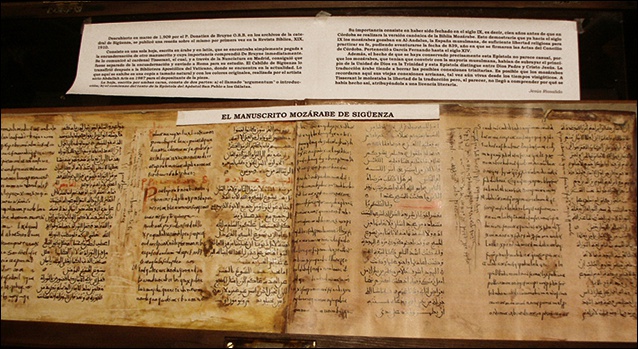 © Sigüenza, Biblioteca Capitular, Seguntinus 15; it is the same manuscript in its previous archive.

When I first saw this fragment (a folio, both sides) I found it interesting because of the cultural context of coexistence Christian and Muslim it depicted, but I did not really pay attention to it thinking that, surely, it would have been widely studied and published. I made an entry in my notes (list of fragments in Visigothic script) and moved on. However, having today Arianna’s work has brought me back to my notes.

The fragment was first noticed by De Bruyne, who found it attached to the binding of another manuscript – nº 150, 14th century – (Une feuille arabo-latine, 1909), notes by Lowe (Studia Palaeographica, 1910), and before Arianna’s work, it was related also within the list of Visigothic script codices by Millares Carlo (Corpus de códices visigóticos, 1999), from whom Cherubini took his notes (Le Bibbie spagnole, 2005).

Their suggested date is the 9th century (in fact, their first thought was from the 10th, but they changed their mind, so let’s say late 9th c.), taking as a relevant feature the distinction between ti/tj [this topic deserves its own post…]. Unfortunately, in the current state of the art, it seems that the Arabic column cannot be dated or geographically located (see D’Ottone, p. 15-16, note 44), so one can only rely on the Latin text. If the fragment is from the 9th century, Arianna says it would be one of the first examples preserved in Maghrebi script, becoming really important to date accurately the Latin part. So, 9th/10th, late 9th/early 10th? How can I help? Arianna says that the scribe of both columns is the same and that he had to be a Christian, as he copied a Christian text and placed the Latin column in the left side. I can add that he did not write in Mozarabic Visigothic script but in Astur-leonese, meaning that it can be geographically located in both the Christian as well as the Muslim ‘Spain’. In order to revise the date, we can only rely on comparing its features with other examples preserved from the same place. But what place? Considering the archive history of the manuscript, since it was kept in Sigüenza (Biblioteca Capitular, Seguntinus 15) until the early 20th century – it seems that the Vatican felt in love with the manuscript and asked for it in 1910 for a no return ILL –, the quick answer will be to place its origin there. Thus, he was a Mozarab from Sigüenza. Looking at the image, I would say that he first copied the Arabic column; it looks to me that the Latin text is compressed. Anyway, as soon as I have the time and knowledge, I will return again to this fragment.

Digging a little, there is another manuscript preserved with the same distribution in two columns Latin/Arabic: Leiden, Bibliothek der Rijksuniversiteit, CLXX (Glossarium Latino-Arabicum).

Leiden CLXX has been studied by Seybold (Glossarium Latino-Arabicum, 1900), who has attributed it as an example from the 9th or 10th century, and by Van Koningsveld (The Latin-Arabic glossary of the Leiden University Library, 1977) who changed the date to the 12th century. Millares also accepts that date. I am still learning and maybe I am wrong, but I agree (mmm… maybe late 11th?). It seems that it was copied in Toledo.

I am very happy knowing about Arianna’s work. Moreover, as, by chance, it turns out she is here in Toronto, despite living in Rome, and we had the opportunity to meet and exchange ideas. I work with scripts, Latin scripts, and I am not a historian or a philologist (unfortunately and at least not yet). I am not specialised in ‘everything’ that happened between the 9th and 12th centuries in the Iberian Peninsula, Christian or Muslim. Being able to rely on experts like her to complete the approach that must be done to fully cover a manuscript’s history is comforting. Not many people agree to work together recognising each other’s strengths and weaknesses, and I am glad of having, over the years, a small group of people with whom I can collaborate.