Beware of what you find online! I am not normally against Wikipedia, but this time the entry about Visigothic script has made me quite unhappy...

Last week, I was googling when arrived at the Wikipedia article on Visigothic script (English version). I cannot resist talking about it. I strongly believe that Wikipedia does a job making easy to get access to information and that it can be useful if you are totally lost in a subject. I myself have sometimes consulted it. The intention of this post is just to warn again about the reliability of the source: maybe a good introduction, not a good/serious source of information. I mean absolutely no offence to anyone, I am just giving my opinion. Also, I am a bit annoyed since an MA student told me after a conference debate that her main bibliographic source is this website…

Visigothic script was a type of medieval script that originated in the Visigothic kingdom in Hispania (the Iberian Peninsula, modern Spain and Portugal). Its more limiting alternative designations littera toletana and littera mozarabica associate it with scriptoria specifically in Toledo and with Mozarabic culture more generally, respectively. The script, which exists in book-hand and cursive versions, was used from approximately the late seventh century until the thirteenth century, mostly in Visigothic Iberia but also somewhat in southern France. It was perfected in the 9th-11th centuries and declined afterwards.

This first sentence is so strange to me! I do not know if I am missing something with the translation. “Was a type of medieval script” sounds like the script was something pre-established by the ‘government’ somehow. “Originated in the Visigothic kingdom”, originated? Visigothic script was the graphic form the Latin alphabet acquired for most common writing uses in the Iberian Peninsula and Septimania in the Middle Ages. Thus, it was used, between around the 8th and 13th centuries – this chronology depends on the regional variant – , in the territories that once formed the ancient Visigothic kingdom. It was not originated suddenly during it [I don’t like the term ‘originated’ at all]. During the 5th to 8th centuries, the features that will be distinctive of Visigothic script were developed gradually in a natural evolution that can be seen by analyzing the graphic forms of the so-called ‘new Roman cursive’ writing – common graphic point for all the continental national writing systems – preserved in slate tablets and graffiti. Therefore, while the script was being developed and its main distinctive features were taking shape, the ‘Visigoths’ were there but they did not see the script in its ‘final’ form, the one that we call now Visigothic script. [I would put a lot of footnotes here… I remember all the students who have told me “is the writing made by the Visigoths” when I read this paragraph, sorry]. 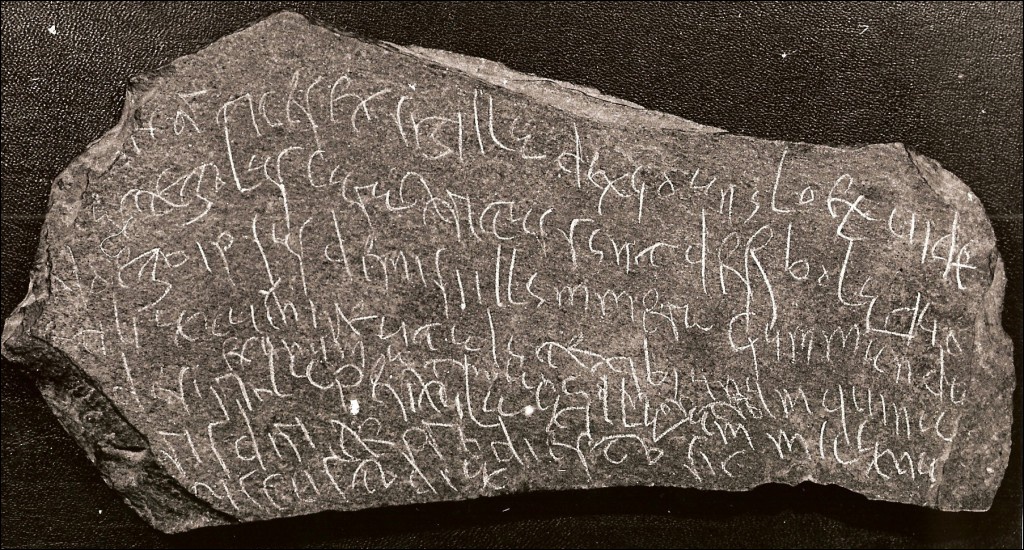 “The script, which exists in book-hand and cursive versions….” The script does not exist only it two versions, although it is true that, traditionally, only two main typological variants have been differentiated. An observation: both variants were developed at the same time, influencing each other, from the aforesaid ‘new roman cursive’. As I was saying, the script has four ‘versions’: its typological variants are cursive (and its own variant elongata), semi-cursive/half-cursive, minuscule and minuscule in transition to Caroline minuscule script. [And, for those who were my students, yes, the minuscule variant was used also in charters].

It developed from Uncial script, and shares many features of Uncial, especially an uncial form of the letter g. Other features of the script include an open-top a (very similar to the letter u), similar shapes for the letters r and s, and a long letter i resembling the letter l. There are two forms of the letter d, one with a straight vertical ascender, and another with an ascender slanting towards the left. The top stroke of the letter t, by itself, has a hook curving to the left; t also has a number of other forms when used in ligatures and there are two different ligatures for the two sounds of ti (“hard” or unassibilated and “soft”or sibilated) as spoken in Hispano-Latin during this period. The letters e and r also have many forms when written in ligature. Of particular interest is the special Visigothic z, which after adoption into Carolingian handwriting eventually transformed into the c-cedilla, ç.

“It developed from Uncial script”… The Visigothic cursive variant has its starting point in the local evolution of the lowercase Roman cursive script (called New Roman Cursive), particularly in the one used in the provincial chanceries, while the Visigothic minuscule one developed through the calligraphic execution of the Roman semi-cursive/half-cursive minuscule, that was used for copying codices from at least the 4th century.

Some of their main features can be seen in the next images:

I am not sure about the “cedilla” explanation, but I am not a linguist so I will let it be although it is the first time I hear about that.

From the standard script, a capital-letter display script was developed, with long slender forms.

The capital letters were not only developed by giving a bigger size to the lowercase alphabet, the Roman common capital forms were also used (as usual because the script is an evolution...).

There was also a cursive form used for charters and non-religious writings, which had northern (“Leonese”) and southern (“Mozarabic”) forms. The Leonese cursive was used in the Christian north, while the Mozarabic was used by Christians living in the Muslim south. The cursive forms were probably influenced by Roman cursive, brought to Iberia from North Africa. Visigothic script has many similarities with Beneventan script and Merovingian script.

It is worth noting that the Spanish version of this article is much better. This hides a big problem on the study of Visigothic script: scholarly works published so far are, most of them, only in Spanish, making it difficult to spread the main advances made, but this is another debate…

Again, I do not know who wrote that and I really appreciate his or her effort to bring the existence of this script to the large public, but I am Spanish, we tend to be a little picky… Anyway, the main aim of opening this blog was to talk about Visigothic script (and to learn English) and this Wikipedia article has given me the perfect excuse to start writing about my favourite medieval writing system. I will be posting on this script henceforth (with bibliographic references), with as many images as I can or the copyright leaves me.