How did medieval abbreviations come to being? Why do they take that form?

It is time to write about one of my favourite topics on working with medieval manuscripts: the abbreviations (the other the medieval punctuation system; I will write about it soon). Each writing system has their own abbreviations. They evolved by being used as well as for external influence of coeval writing systems. Scribes and copyists used them extensively, and they were a real nightmare for the first palaeographers who, during the Enlightenment, tried to solve them as well as even for medieval amanuensis. It is entertaining to try to solve them, to think in how scribes learnt to use and recognise abbreviations, almost as it is to see how, in some cases, even they got confused in their meaning, particularly among writing systems; those learnt in Caroline minuscule felt very stressed when reading Visigothic script manuscripts, and not only for the script!

The practice of abbreviating words was active since the beginning of written culture as it continues now in our digital communications (msg and so), and, as today, one of the two clearly identified reasons of its existence was to speed up the process of writing. It is not the same to write each one of the letters of, let’s say confirmat, that just to write cf. for each one of the tens of witnesses of a charter. But besides that, medieval abbreviations were also used to get the most out of the writing material, parchment, pretty expensive by the time. Using the less space possible seems to have been one powerful reason.

Conventionally thus, only these two reasons have been discussed. However, in my point of view, yet another maybe more important argument needs to be fully explored: tradition. If shorthand techniques were initially used to speed up and cheapen writing, during the Middle Ages tradition I think was the main reason for using abbreviations, moreover bearing in mind that some of the methods employed are more complex and laborious to write than the word itself. To me, this becomes clear when working with charters were it can be seen an evident tendency to apply, for example, those abbreviations classified under the type nomina sacra. But let’s start at the beginning.

In the beginning, there were abbreviations 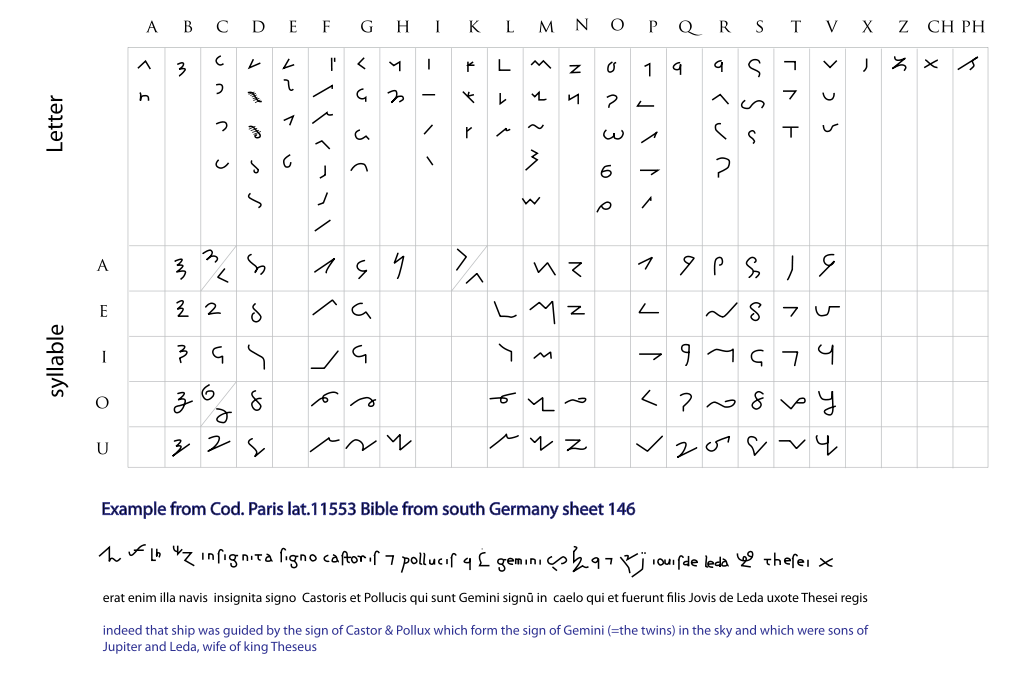 The origin of the abbreviation system used in medieval manuscripts lays in the methods of abbreviation already used by the Romans, obviously a bit more elaborated and disorganised as medieval rules applied for writing tend to be giving the diverse cultural background of the scribes. More precisely, in Roman acronyms and in the shorthand notes, called Tironian notes, used for official business and especially legal jargon. [see FIG. 1].

In the Roman Empire, names and legal formulae, among other terms, used in inscriptions and other written testimonies were shortened by using only the initial letter, sometimes duplicated to express the plural (ex. C for Caius, K for kalendas or SPQR for Senatvs Popvlvsqve Romanvs). These are the first and simplest abbreviations in which only that part of the word, the initial, is preserved, and are called singula litterae or litterae singulares.

Following the same principle, and also over the same period, another system started to be used, built again preserving the first letter but also some of the initial ones of the word (ex. CLA for Claudius or PR for praetor). These are called abbreviations by suspension. Suspension is the most spontaneous mechanism, but it is also the least precise one as it is difficult to solve and requires familiarity with the text itself. Luckily, in the first century AD the grammarian M. Valerius Probus collected and explained some of these abbreviations (De litteris singularibus fragmentum). It has two basic types: one preserving only some of the first letters, and other preserving only the consonants, called syllabic suspension (although I have only seen and used the former, referring to the syllabic suspension as contraction).

The Tironian notes, attributed to Marcus Tullius Tiro (last century BC), are a tachygraphic system based in the use of some specific signs for the theme or prefix of each word plus auxiliary signs for the endings.  The most frequent signs for the medieval period are those of et, enim, sunt, esse and con [see FIG. 2]. If you want to know more about Tironian notes, there is a website on the topic (in German).

The constant and extensive use of the Tironian notes in the Roman world, and particularly in administrative context, resulted in the development of another abbreviation technique known by the name of notae iuris or notae antiquae since it expanded also into non-legal texts, developed between the 2nd and 5th centuries, which heavily influenced the medieval abbreviation system. FIG. 3 lists some examples of this type. 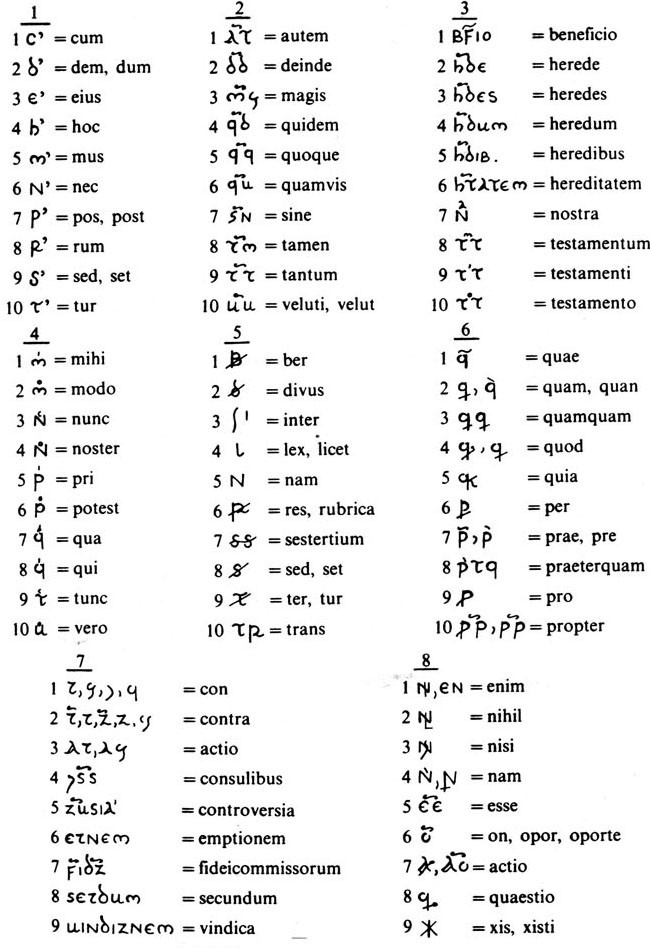 From the 4th century on, with the expansion of Christianity, new abbreviations were used to refer to terms central to Christian worship like Deus, Iesus, Christus, sanctus or ecclesia; the nomina sacra. As can be seen in FIG. 4, they receive their name for the cultural context to which they refer to and not for the mechanism used to form them, mixing thus abbreviations by contraction and suspension. The nomina sacra, besides those abbreviations made by means of signs or superscripted letters that will be discussed in the next post, became the most characteristic ones in the Middle Ages to the point that it is difficult to find a text without one. Furthermore, being easy to remember and widely understood, they served as starting point for developing the next generation of (medieval) abbreviations, and provided one of the graphic aspects that these shortened words will, thereafter, always include: the small horizontal line on the top of the letters called “general sign of abbreviation”, macron or tilde.

All these methods of shortening words were preserved and expanded during the medieval period, mostly by Irish monks, incorporating some others that, although having their origin in the same fundamental techniques, are classified differently.

This is fantastic, thank you so much for this post!!! So helpful.

Very interesting, thanks! But I think the legibility would be greatly improved by substituting the verb “speed” for the verb “fasten”. In English, to fasten or make fast means to bind or tie, and does not have anything to do with speed or time. So,

“shorthand techniques were initially used to speed and cheapen writing”

is the correct formal English. In American English it would be, more colloquially,

“shorthand techniques were initially used to speed up and cheapen writing”

because Americans use the word “speed” only as a noun, and use “speed up” for the verb form. But the modifying word “up” is really not necessary or formally correct outside of the USA.

Charlie,
Many thanks not only for reading but for taking the time to write this. Please do not hesitate to let me know any other mistakes, especially those that can change the meaning!
A.