How were medieval abbreviations used and developed by Visigothic script scribes?

Knowing from where the medieval abbreviation system comes from, its Roman origin and adaptation throughout the Middle Ages, it is easier to recognise and understand the different methods used to contract words in Visigothic script manuscripts and the more efficient approach to classify and decipher their abbreviations.

While each versed scribe displays his or her own distinctive alphabet – which varies in its general aspect, allographs, serifs, ligatures and nexuses –, the shortenings used by all Visigothic script amanuensis were the same according to the structure: those lacking a nasal, those made by special signs, Tironian notes, notae iuris, and those made by contraction and suspension. Some techniques and peculiar styles were preferred in specific centres just as some methods were not exactly the same in all typological variants, but, in general, a model and its evolution from the 8th to the 14th century can be defined.

Therefore, what follows is a brief summary of all the abbreviations utilised in manuscripts written in Visigothic script divided by the main typological variants – cursive and minuscule – plus some notes about the perceptible changes on transitional scripts. I am following the methodology explained in the last post and have added some considerations as for the evolution of each method of abbreviation, useful for dating and locate manuscripts from the northwestern Iberian Peninsula.

In Visigothic cursive (and cursive in transition to Caroline minuscule), the common sign for stating an abbreviation adopted very different shapes, often using the same scribe two or more designs in the same manuscript [see FIG. 1]. In the oldest examples, the most frequent macron used was that similar to a knot or loop, while in the most recent ones the favourite design was the regular macron, particularly employed in those letters with an ascender.

The usual horizontal macron was preferred as general sign by those scribes versed in Visigothic minuscule (and minuscule in transition to Caroline minuscule).

Those scribes writing in Visigothic cursive script did not use the same flourished design of stroke above the letters for indicating the lack of nasals than just for pointing an abbreviation. In fact, the nasals m or n were not even elided in the earlier examples (before the 11th c.).

In manuscripts from the 11th century onwards, from the shapes shown in FIG. 1, those resembling a knot, loop or spiral were not employed for this purpose but only the roughly horizontal line, on occasion adding a dot or another parallel line to it.

As for the general sign to indicate lack of nasals in the minuscule variant, the design of the sign recurrently employed was the regular macron for n, usually adding a dot for m.

Writing in Visigothic script, both cursive and minuscule, the scribes developed different signs to shorten the endings -us, -um, -is, and que, per and qui.

The main sign employed to signify the ending -us in the cursive variant was the one similar to a G-clef after b, d, I, m/n, p, r or t [see FIG. 2, first image]. From the mid-11th century onwards, although less frequently, scribes using the cursive variant also utilised a small wavy stroke similar to an uppercase s drawn superscripted after b, d, I, m and p [FIG. 2, second image]. This latter sign with the same meaning was also the one used in the minuscule variant after b, I, m/n, p and t. In some unusual examples in cursive script from the last decades of the 11th century on, a wavy stroke cutting the ascender of b, d and I can be found too [FIG. 2, last image].

In minuscule in transition to Caroline minuscule script, besides using profusely the sign similar to an s to indicate -us, a superscripted semicircle after b, d, i/I, m/n, r, s and t started to be favoured [FIG. 3, last two pics].

For representing -um, the scribes using the cursive variant employed the same “G-clef like” sign as for -us now after n, r and t [FIG. 4, first image]. From the mid-11th century on, this ending was also noted by an oblique line cutting the final stroke of the letters n an r [FIG. 4, last two pics], sign that will be the characteristic one of the minuscule variant being employed only after r cuadrata (also after m/n and t in transitional script, for which it was the only one used for -um). 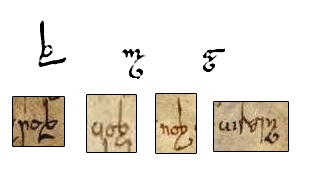 Another of the characteristic signs in cursive and minuscule Visigothic script was that used for the ending -is [FIG. 5]; a wavy or spiral stroke under b, m/n and t, which progressively became more elegant. 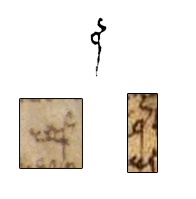 In isolated cases in the cursive variant and frequently in the minuscule one, que was abbreviated by a q plus the same sign as for -us similar to an uppercase s, although not before the mid-11th century (cursive) [FIG. 6].

In transitional scripts que was abbreviated by a q plus a semicircle or semicolon [FIG. 7]. 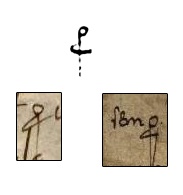 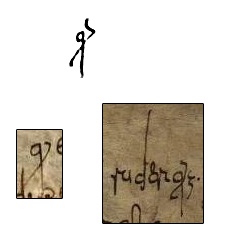 To end with, for per and qui two different signs were used in cursive and minuscule; per was frequently condensed in all cursive examples [FIG. 8], while shortened qui tends to become rare around the mid-11th c. [FIG. 9]. In transitional variants, the most frequent form for per was the so-called “continental per” (a p with a horizontal stroke cutting the descender of p) [FIG. 10, first image].

There is a long list of abbreviations by contraction and suspension used both in cursive (especially) and Visigothic minuscule script manuscripts. By and large, the reductions used in the cursive variant tend to be a bit more intricate since the scribes did not usually follow the easiest contraction, maintaining unnecessary letters (each scribe his choice). Some examples: apstls for apostolus, epcs for episcopus or prsbtr for presbiter. Aum for autem, ppls for populus, pptr for propter, scdm for secundum, or sct for sicut and the possessives noster/uester with s (nso/uso) and not with theme in r (nro/uso) are also notably representative.

The influence of Caroline minuscule was first shown in Visigothic script manuscripts in the abbreviation system and can be easily recognised: besides the profuse use of abbreviations by superscripted vowel (for cri, igitur, mihi, modo, nihil, pra/pri/pro, qua/qui/quo, quomodo, tibi, tri/tro, uero) and the more frequent Tironian notes (for et and con) and notae iuris (est, sunt), another Caroline minuscule examples are au for autem, ap for apud, ep theme for episcopus, nb/ub for nobis/uobis, pbr for presbiter, qm for quoniam, qd for quod, sct for sicut, tpre for tempore and ul for uel. Note that, in the first manuscripts preserved written in Visigothic script, some abbreviations that will be more frequent in the Caroline writing system – like ep for episcopus, nne for nomine, the Tironian note for con (ɔ) or the “continental per” – can be found; that does not necessarily mean there was an early influence of Caroline minuscule but a prevalence of traditional writing practices, since these forms were already in use in the first steps of the abbreviation system.