Around a month ago I published a post on a Visigothic minuscule script leaf that was sold at an auction at Bloomsbury just before summer. There I said “… I will not be surprised if other leaves very much like this one appear in the near future…”. Well, they have. Some weeks ago I received an email from Prof Scott Gwara (whom I recommend to follow, btw) asking about my thoughts on not one, not two, but four! new fragments. We/I immediately set to study them. I copy below part of their descriptive file. 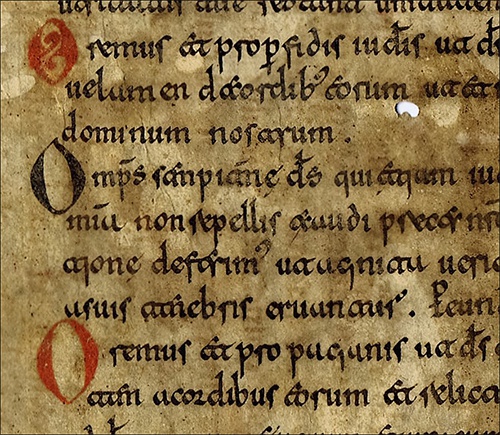 This Sacramentary doubtless came from a major center of production with notable scribal training, old paleographical and codicological traditions, enduring traditional models, and, despite the obvious Caroline features, a relative impermeability to exogenous influence. It boasts a traditional (first stage) codicological structure preserving the traditions of book manufacture from southern Iberia. The text is presented in a single column and the parchment heavily ruled, dividing the surface into lines of compact interlinear spacing. The layout of the page clearly affects the script. The fragments are written in the same calligraphic hand, with a thick pen and black ink. The scribe obviously aimed for aesthetic appeal, and the elegance of his mis-en-page partly derives from his exceptional graphic consistency, intensive shading, and effort to respect the base line. The ruling and wide nib make the aspect condensed and stately, yet legible, balanced, and handsome.

A stage 3 typological variant of Visigothic minuscule script (transitional Visigothic), the hand of our fragment exhibits perfectly vertical but not over-developed ascenders, short descenders turned slightly backward towards the end, a pen-angle of approximately 45 degrees, a wedge-shaped approach stroke, and 2-shaped serifs. All the graphs are drawn according to the usual graphic model… Certain key features characterize this hand. First, the thickness of the pen combined with the angle results in a substantial contrast between strokes. Second, angular ligatures and nexus (bitings) formed with open eand r distort the heavy horizontal aspect of the model, adding a kind of dynamic verticality. Caroline and even Proto-Gothic influence is clear… Finally, the grammar is better than one generally encounters in Visigothic manuscripts.

Simply judging by the style and execution, the manuscript cannot be from the eastern Iberian Peninsula. One must, therefore, exclude Septimania, Aragon, La Rioja, and Castile as possible production centers. Nor does the script exhibit Mozarabic elements. While Toledo represented an enduring stronghold of Visigothic script (the last codex dates to ca. 1400), Toletan hands typically show Mozarabic influence. However slight, some script comparanda (noted below) make Toledo a remotely possible origin.

The scribe of our manuscript was trained at a time when the Visigothic standard had already mutated into a transitional script. Since this graphic model needed time to evolve, it belonged to a cultural context in which Visigothic script was still employed long after European systems had arrived, but one in which neoteric influences had time to settle. In Leon, the transition from Visigothic to Caroline extended for about half a century, being more or less complete by the 1140s. In western Iberia, this process took far longer. The transitional period in Portugal, for example, extended from the mid-11th century until the 1170s, while in Galicia it lasted from the late 11th century until ca. 1200. Visigothic script evolved gradually in these areas. Yet our script style does not match that of fragmentary examples from Galicia (compare the Missale at the cathedral archive of Santiago de Compostela, fragment I; Corpus no. 286). On balance, northern Portugal in the period 1130-1170 represents a plausible origin (compare the Liber quaestionum at the national library of Lisbon, ms. 38; Corpus no. 99). Even so, a Toletan origin cannot be entirely ruled out (compare the Antiphonarium of Roman Use now in Toledo, Archivo Capitular 10.5; Corpus no. 313).

Aquitanian notation of the peninsular “early type,” most similar to neumes used originally in southern France. This notation was introduced in the Iberian Peninsula around 1080, but the notation of our fragments cannot be as early as that, nor can it be as late as ca. 1200. A mid-century date is most likely and perfectly justifiable.

All the texts come from the services for Holy Week. Bisected complete folio: Lesson from Isaiah 53, versicles, and passion reading from Luke 22-23 for Wednesday of Holy Week. Bifolium 1 (internal bifolium), texts for Good Friday, including the “Solemn Collects” (“Prayer of the Faithful”) from the Liturgy of the Cross for Good Friday, with prayers for Jews, schismatics, and heathens; “Adoration of the Holy Cross,” antiphons known as the “Reproaches” (for texts see Liber Usualis 734-42). Bisected strip: versicles for the Good Friday mass. Bifolium 2: for Good Friday, versicles and Passion from Io 18; for Holy Saturday, a lesson from Gn 1.1-2.2, prayer Deus qui mirabiliter creasti, a lesson from Ex 14.

All pieces from a binding therefore rubbed, wormed, holed, stained, cut, and damaged as depicted in the photographs.

From an old European collection.

Let me just say, I am eager to see what appears next!

* I would like to thank Prof Gwara for sharing the news about these fragments and for letting me take a look at them. I really appreciate it. My thanks go also to Dr Elsa De Luca, who help me with the description of the musical notation.