Today’s post is very special to me: it is about the hands, as shown in medieval illumination programmes of codices in Visigothic script. Why? Because there is plenty to say about their meaning!

Hands tell a story. They are, as eyes, the most expressive part of our bodies, and medieval illuminators knew it. They used their hands to depict hands which represent their daily activities, and used them to build a bond with the reader, or better, with the avid interpreter. Those who looked at these figures, at their hands, were able to easily understand why were they there, what were they trying to convey, in a universal language that we can perfectly understand too. Hence, hands were not just a “part of the body” that they had to draw to compose the human figure, but a way of making their illuminations even more powerful, even more expressive, allowing those who saw them to connect with images and texts, integrating both in their own lives as something that is not external but a very important part of themselves.

As usual in these #summerposts, that will be soon ending, I have compiled images I have been tweeting lately for gathering at least a representative collection of depictions of hands. 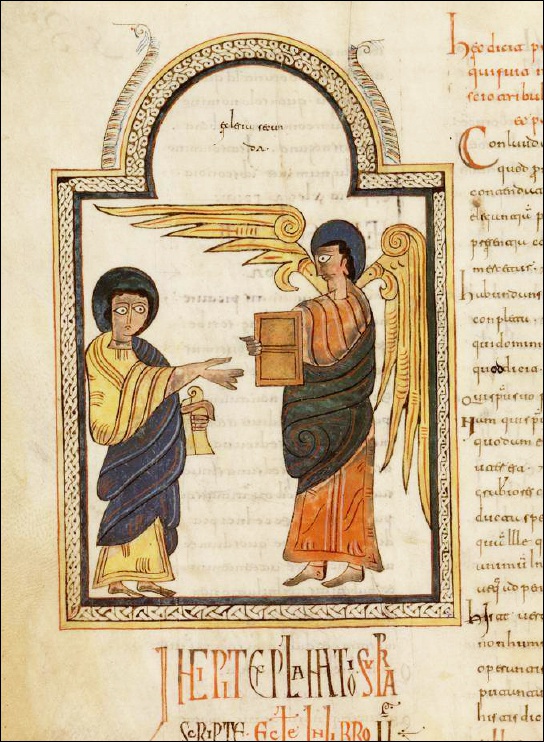 You will find hands holding books or parchment scrolls like in the image above (The Revelation). Iohannes, St. John the Apostle, holding a roll in his left hand while extends his right towards an Angel, who, staring at him, offers him a codex. The Angel is giving him a blank canvas so he can write the Revelation for all Christendom. Looking closely at the first picture you will see that the codex has a gilded binding. In the miniature of the message to the church of Philadelphia, the Son of Man completes the passage with the key of hell in his left hand.

Codices and scrolls were also represented as companions of other, less angelic, figures. Thus, the Abbot welcomes another holy figure that gives him a codex, with its characteristic two-column layout, a perfect and necessary companion to his preaching as leader of the Community. Martinus, bishop of Braga, dressed in ceremonial attire, stares at a roll of parchment in his left, hand raised, while blesses it with the right. Just like Cindasvintus rex and Sarracinus, one of the copyists of the codex in which these miniatures are found, do. Kings, queens, bishops, scribes… for all of them, the Word was part of their lives in the northern Christian kingdoms of the Iberian Peninsula, fighting against Muslims, beginning to organise Medieval Spain.

You will find also hands worshipping God, raised, angels and men together, standing or accompanying a prophet respectfully inclined. They are in a dialogue with God, but also with us, who see the miniatures to contextualise the text. Just in case their symbolism gets lost, their fingers point to the action: the elders of Israel to Moses striking the rock at Horeb and thus giving people water (seasoned with fish) to drink; or the seventh Angel pointing to his bowl upon the air, which, when poured, kicks off the great earthquake (beheaded figures included). 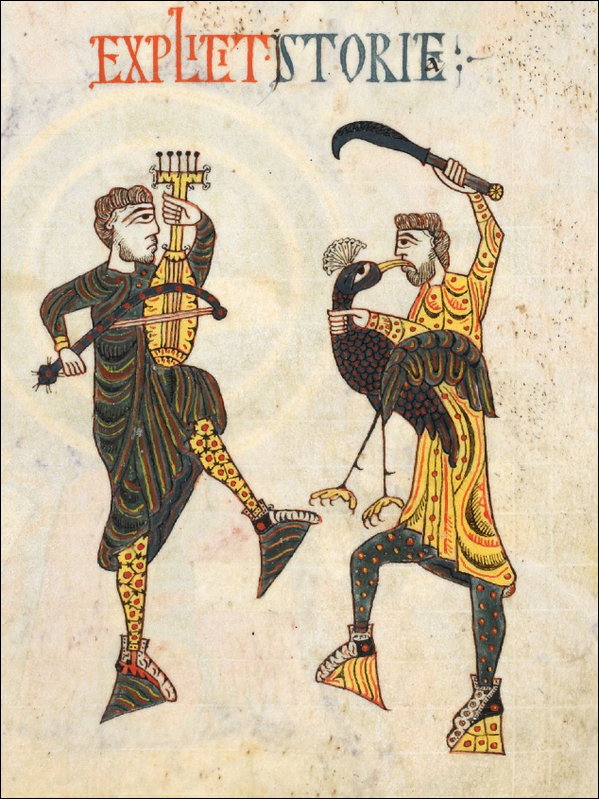 But what is perhaps even more interesting is when the figures talk to each other, as if no one was watching. Mateus talks with Marcus, in his lion form, between Romanic decorated arches atop the Canons; Moses calms the elders (“It’s just water, I’m not special, but thanks!”); and the Church and the King speak, measuring their power and influence.

It is all about Sacred Scripture and its commandments, transmitted by drawings and text, by the codex, and, in some examples, few but representative, we can get a glimpse of their making. The scribe Vigila, stellar amanuensis in the Visigothic script Iberian Peninsula, writes a colophon (one of the longest ever!) for his codex, explaining his work (how and with whom he did it).

Of course, hands were also, as today, useful for other more practical things. God commands it! The Army of Lord set an example for the Army of Christian Kings. What will be of medieval times without a fight? There was also time for joy though, making music while worshipping the Lamb or dancing wearing highly fashionable shoes.

In the end, what these figures and their hands are depicting for us are their medieval lives. A life of harvesting, praying, reading and writing for God. But, and this is a big but, that was not all…. Writing about hands on medieval manuscripts, we cannot forget the maniculae, not only beautiful per se but because of all the information they give us about those who read, about what were they interested in.  Something as revealing as the hands on the last image, hands attesting that the charter on which they were imposed was legally confirmed and was therefore valid under the law. These are also “practical” depictions of hands which tell a story, a diplomatic and not ecclesiastical only story though.