Which script did the Visigoths use for writing? It was not Visigothic script!

Summer is almost over. In a few days, it will be time to start a new academic year, one that comes with new challenges for me building a network for the study of manuscripts in Visigothic script while promoting the script and its study outside the Iberian Peninsula. But, before the chaos arrives, is still August and therefore I am still publishing #summerposts. This will be the last one; a post with images intended to introduce a very complex topic in a little more ‘edible’ way: Visigothic script before Visigothic script –aka the script that was used during the Visigothic kingdom that is not yet Visigothic script. 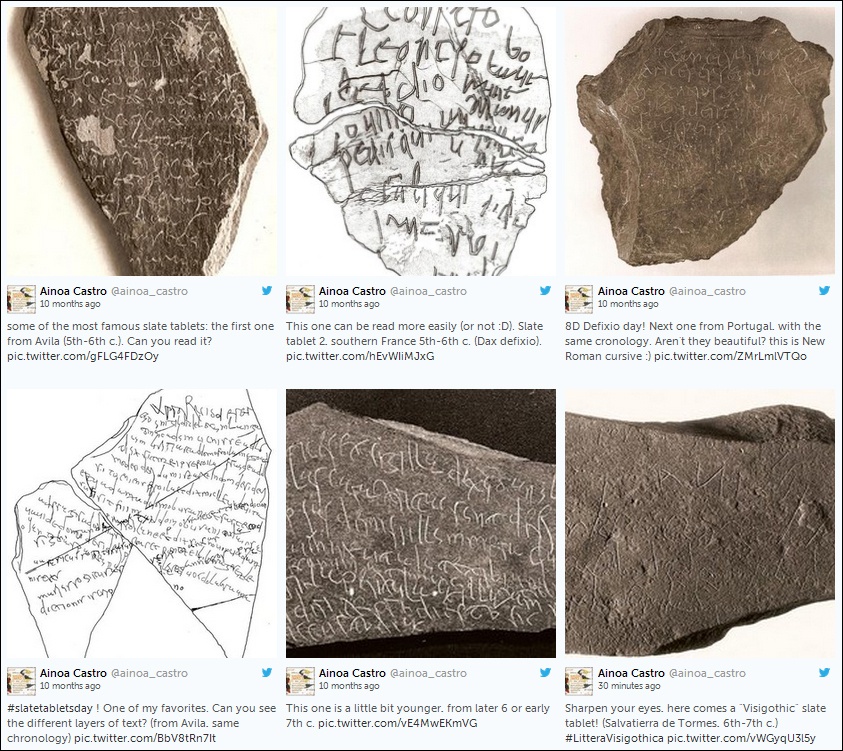 As usual, here is the Storify. I have tweeted pictures of some of the examples preserved that help us understand how Visigothic script was taking shape, progressively, from the New Roman Cursive (the script used in the Late Roman empire for common written practices –meaning, day by day use) to what it is now understood as Visigothic script.

Those images of slate tablets and graffiti come from the excellent article “La escritura visigótica cursiva en su período primitivo”, by Isabel Velázquez, published in “La escritura visigótica en la Península Ibérica: nuevas aportaciones” (proceedings of the Workshop on Visigothic script held at the Universitat Autónoma de Barcelona in 2012). One of the books I have edited so far.

The charters from the Visigothic chancery (not in Visigothic script) are digitised an online at the National Spanish Archive’s (Archivo Histórico Nacional de Madrid) webpage. For those of you who prefer to see them “on paper” you can check the Chartae Latinae Antiquiores vol. 46. Unfortunately, only these five fragments have survived. The collection was thoroughly studied by A. M. Mundó, one of the best paleographers we had, in what was his PhD dissertation (“Los diplomas visigodos originales en pergamino: transcripción y comentario, con un regesto de documentos de la época visigoda”, Universidad de Barcelona), and published also by Canellas (“De diplomática hispano-visigoda: colección documental”, Cuadernos de historia Jerónimo Zurita 33-34 (1979): 251-418; available online here).

This stuff is so awesome! I love the period post 400CE because so much happened. Cool stuff like this.

Thanks for making it so accessible. I have zero academic knowledge of this topic, but still enjoy and understand your posts.

Many thanks Jonathan! It’s always nice to have feedback; it keeps me blogging :)