A short introduction to medieval manuscript illumination, particularly to the styles found in Visigothic script manuscripts.

The one thing that has always captured my attention when looking at Visigothic script manuscripts, long before I was able to crack the script and even before knowing that Manuscript Studies existed, is the images, the fascinating depictions of strange human figures standing just in front of me, staring. For me, I guess that especially for being so young ‒ the first time I saw a Beatus I was about 10 ‒, these figures quickly spoke; they were communicating in a way that no other figural representations had done before. I now know a bit more about the manuscripts in which they stand, about their context. These miniatures, illuminations, this type of medieval art, it was developed for people who, like me when I first saw them, could not understand the passage of text to which they were linked to, so even those who cannot read could understand. I did indeed. The fighting serpent-like monsters that populate the Beatos, stood in my mind for years, unconsciously urging me to learn Palaeography and now to decipher them. Here my first incursion into the world of manuscript illumination.

I feel I should add a disclaimer. I am a palaeographer, not an art historian. I am not specialised in distinguishing, in dating and placing, representations of art of a magnitude as that of the illumination programmes found in Visigothic script manuscripts by schools, scriptoria, or masters as some of you might. But, I am curious and always open to discovering new things, and since I am reading a lot about the topic lately, I want to learn more. I started with the basics, everything by John Williams on Spanish manuscript illumination, and will continue with more specific readings [1].

I recognise my limitations to judge art history. So, If you are an expert on Mozarabic and/or Northern Peninsular manuscript illumination, my apologies for the inconsistencies that might be in what you are about to read ‒ and, please, you are welcome to share your expertise here if you like. What follows is a very succinct sketch of how I see the world of illumination in Visigothic script manuscripts developed, from the early 8th to the early 12th c. 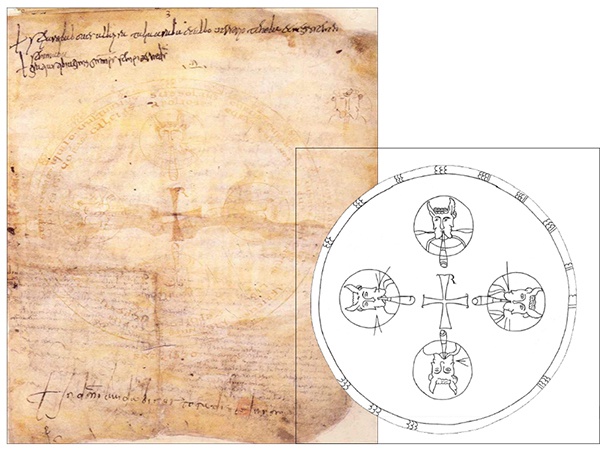 Before manuscripts in Visigothic script only were written in the Iberian Peninsula, thus with not just some notes or maybe some paragraphs in that script ‒ which roughly corresponds with the proper period of the Visigothic Kingdom ‒, the few examples preserved of manuscript illumination link peninsular production with the Classical tradition (Byzantine). As shown in the image above (Verona Orational), the drawings were marked just by lines, and the occasional figures or geometrical frames were not coloured. In doing so, Visigothic master illuminators show a continuity with the past that will soon be reinterpreted, and, more significantly, the ascription of the Peninsula to a shared supranational Mediterranean style. 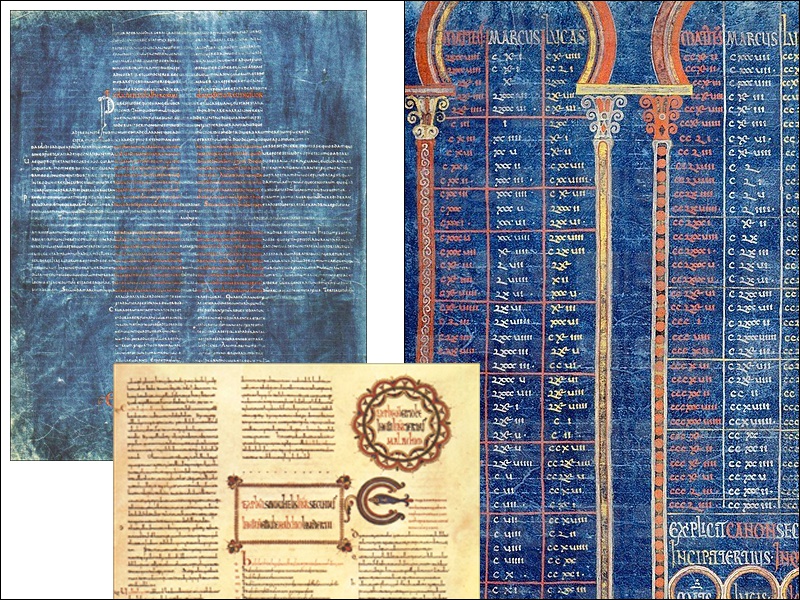 Soon after, in the 8th/9th centuries, extant Christian written production moved to the north (Asturias), and there, in semi-isolation, the intense creativity of the easily recognisable medieval peninsular style began to show. The illumination contained in the manuscripts there produced, still scarce, intertwined both traditional (La Cava Bible) and exogenous styles in a way not seen before anywhere. 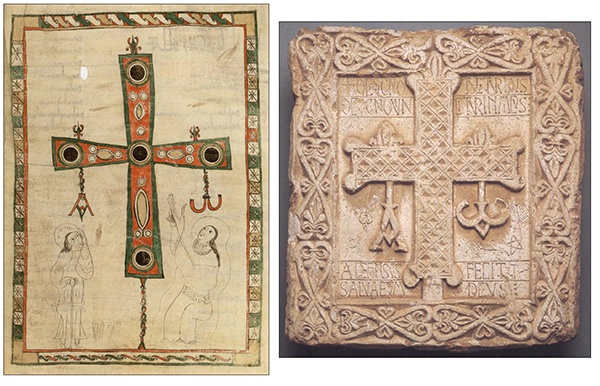 There was a still strong Classical style, with linear, compass-drawn figures, and framed titles (see La Cava Bible above). But, these features, like for example a typical motif of the Classical style as the Canon Tables, created in the 6th c., were reinterpreted in a very personal way. Designs that took shape from antecedents not altogether clear but that, nonetheless, will become quite popular in Visigothic script manuscripts settled. For example the labyrinths or carpet pages, and the Asturian crosses – Cross of Oviedo (see above manuscript Madrid, Real Academia de la Historia, Cód. 26 and the relief panel, and also the reliquary ‘The Cross of the Angels’).

Tendencies that will become familiar later on as predominant, as the brilliant and contrasting hues (red, green, yellow) in frame ornament, and decorated initials based on geometric forms and representations of animal and human figures can also be pinpointed to this period. As for from where this animal/human-like fashion applied to initials came from, J. Williams added a very interesting note on the topic in his book Early Spanish Manuscript Illumination. Paraphrasing, he wrote that although commonly associated with 8th-c. Merovingian illumination, primitive examples appear in Visigothic manuscripts at least as early, and that both Merovingian and Visigothic examples could point to an unknown common ancestry rather than direct influence. And, even scarce, in the first extant examples of illuminated manuscripts it can also be noted the influence of southern features, as the elongated, tear-shaped eyes, or the influence of Kufic script in geometrical-based initials. 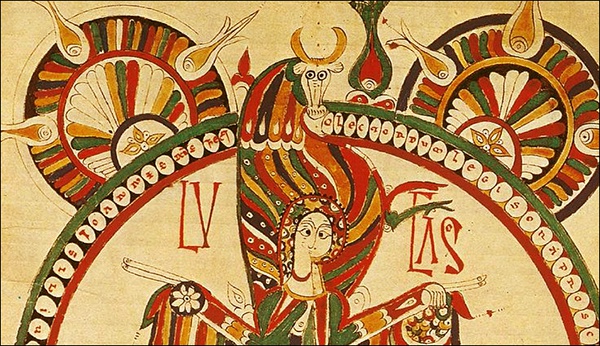 By the early 10th c., all these styles merged together and were wisely exploited by Leonese monastic scribes in a general cultural revival, showing a “radically expanded notion of the art of book decoration” (J. Williams words). Here is where the plane figures so characteristic of Visigothic script manuscripts took shape, dominating the space as full-page miniatures no longer just restricted to blank spaces next to the text. There is no dimension beyond of height and breadth, no perspective in a classical execution, but flat patterns filled with intense primary colours. They were experimenting with colour and with the Classical conventions of human representation, creating something new, dynamic and full of character, where figures interact with one another surrounded by mostly irregular but still geometric patterns (with preference to circular forms), fish and birds. 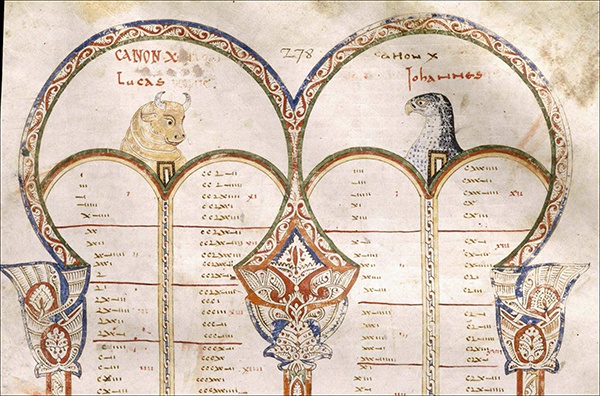 But, what I find particularly interesting is that, at the same time, manuscripts produced by Christian (Mozarabic) communities in the south, show a prevalence of the Classical, more realistic, style (see the Codex Hispalensis), highlighting, thus, that the explosion of colours was a feature of northern scriptoria. The Islamic influence sought in earlier centuries, though, continued and expanded during this period too. Significantly, architectural formulas as the horseshoe arch (Visigothic, but greatly developed by the Umayyads), ornamental designs based on palm trees and acanthus, peacocks, and the adoption of the seated posture associated with Muslim life when representing figures, among others. 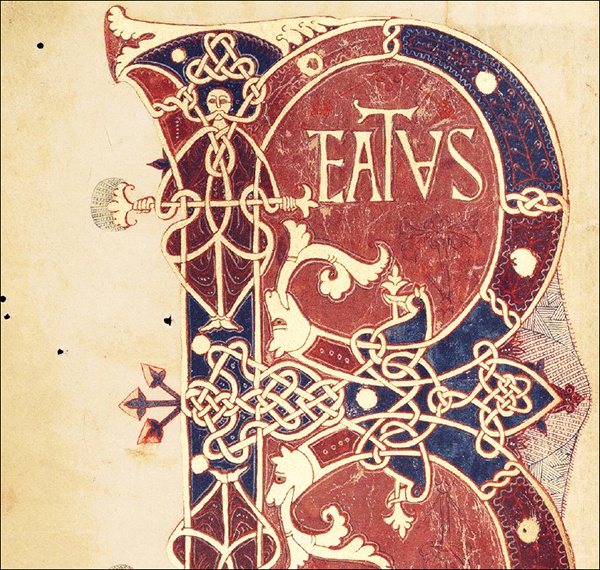 In the second half of the 10th c. Leonese illumination pivoted towards the Carolingian Empire, adopting the designs of geometrical-based, interlaced, initials (Franco-Saxon school), and a sense of “less abstraction” when representing figures, now with a clear narrative purpose. 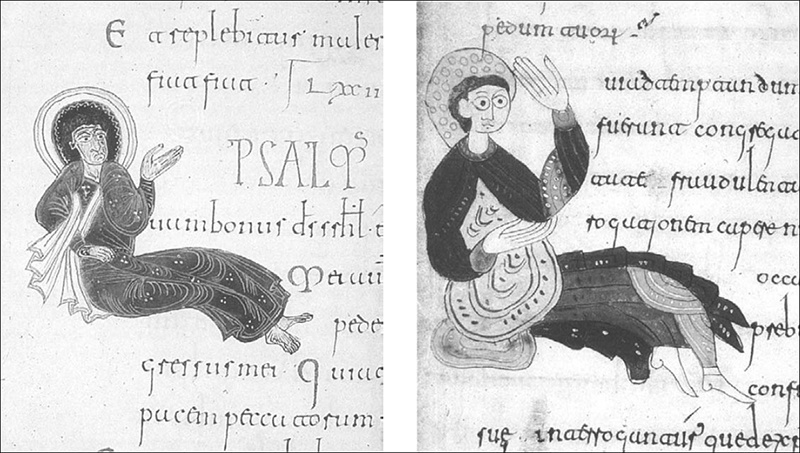 Perspective was assimilated to the conception of space, and movement was embraced by the still in plain colour figures through complex drapery patterns. Motifs that were not native, as the Christ in Majesty (school of Tours), were also reproduced. However, the, what must have been felt, traditional style continued yet to be used, most likely with a conscious intention to express alliance to customs about to be discarded, as can be seen by the late 11th/early 12th c. illumination programme developed for the Beatus exemplar copied in the monastery of Silos, the BL Add. 11695.

“The Silos Beatus is the swansong of the Leonese style. With its almost exaggerated concern for emphatic pattern and color it pays homage to the style in brilliant fashion at the very moment when Spain was participating in the fashioning of the new Romanesque art whose stylistic premises were based on the plasticity so effectively banished by the Leonese painters” (J. Williams, Early Spanish Manuscript Illumination, 27-28).

[1] Another basic I found quite interesting is The Art of Medieval Spain, AD 500-1200 (available online thanks to the Metropolitan Museum of Art), particularly because of the way the authors wisely merge politics, society, liturgy, art (broadly understood), and manuscripts.

I’ve recommended your blog to a fairly mixed group of amateurs – a model not only of technical approaches and method but of those less tangible things which make research worthwhile: integrity in treatment of sources, rigorous attention to what is, and what isn’t, certainly known (and knowable) and the remarkable generosity you’ve shown in enabling so many methods for copying and sharing. Hope the lesson takes. :)

Many thanks for your comment and for recommending the site to other people!
Please remember to credit the source if you are copying the material elsewhere :)