Things to consider when using or consulting the online Catalogue of Visigothic script codices.

Last month, two people who are using the Catalogue of Visigothic script manuscripts for their own research contacted me trying to solve some problems regarding the contents and dates of some of the codices included. First, I must say I am thrilled with the idea that people are not only finding the Catalogue interesting, just for fun but useful, for professional purposes. Second, I am also very happy for knowing about people who, although not interested in the script itself, work with Visigothic script manuscripts. That is one of the reasons that push me to make the catalogue and share it with everyone. It is not only that the almost 400 codices are a crucial clue to study how the script evolved, its regional variants, etc., but also that the texts they contain have not been yet fully studied – I think mostly because some have been forgotten somehow. We all know about the beautiful ones with plenty of illuminations, like the Beatos, but what about the others that do not have nice pretty images?

So, the questions about contents I tried to solve, were just a reference problem as the information included in the catalogue is not yet complete. We just needed to share printed references and combine info. But the questions about dates were a noisy-fascinating-amazing-nightmare-ish problem. I * love * these questions that everyone knows are there and no one wants to answer (or try to at least). Let me say it in another way: if someone asks me for the date and origin of a Visigothic script manuscript the first thing that will come to my mind will be “Dammit!” and the second “What the **** I thought the first time I saw it?” But, besides that, that kind of questions will make me happy. I like controversy, even between me and my two-months-ago-self who filled the entry.

When I posted the Catalogue first, I wrote about the problems with dates and origins it has. The thing is that it is very difficult to unveil the mystery for some codices without colophon or any kind of topographical information. The only way of doing it is by comparison, with other codices and mostly with charters. However, the fact is that there is no list of charters and even having a local one – as each early medieval palaeographer of the Iberian Peninsula has for developing his/her work, for ‘personal’ purposes – to establish the specific characteristics of each hand enough to find a parallel in copying books is difficult. Being Palaeography a mix of art and science, the palaeographic eye is the most important tool we have. And what I mean with that is that each of us who work with Visigothic script (we are a few but luckily each one seems to have their geographic area well-defined) knows their sources and, maybe, he/she is not able to date and place a codex but it is in knowing from where/when it cannot be.

Saying that, let me share the noisy problem I was trying to solve this week: the manuscript El Escorial, P.I.6.

So, El Escorial P.I.6 is a manuscript in Visigothic script (aha!) in which the Etymologiae were copied [1]. The person who asked me for it wanted to know if the date and origin related in the catalogue were correct. That is what the catalogue says: 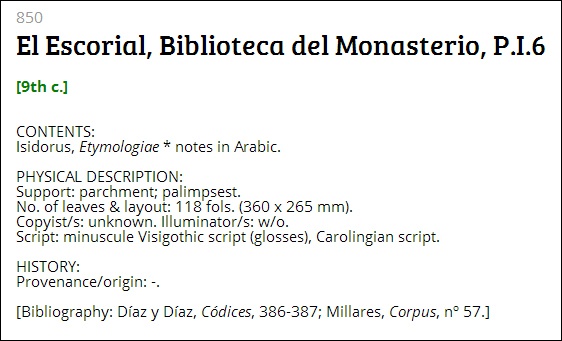 And that is what it has been said: 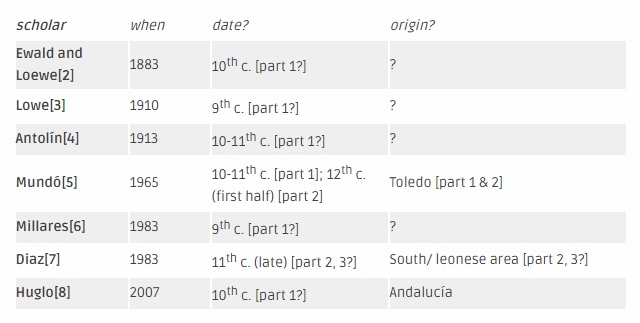 So, looking at the table above, the codex is from the 9th, 10th, 11th or 12th century and from the South, Toledo or the North. What is going on here? As difficult as to place a codex on its chronological and geographical frame is, what is happening here is that we are reading the previous works “wrong” and that the codex itself is not easy to decipher being a product of repeated use throughout centuries and hands.

I have not “physically” seen the codex and it has not been digitised, but, reading the references cited, what I think has caused all the troubles is that the codex seems to have three parts, graphically speaking, and each scholar was considering one part specifically without making it explicit.

(1)    There is one part written in Visigothic minuscule script (see the example of fol. 38v from Ewald and Loewe) with some notes in Visigothic cursive script. 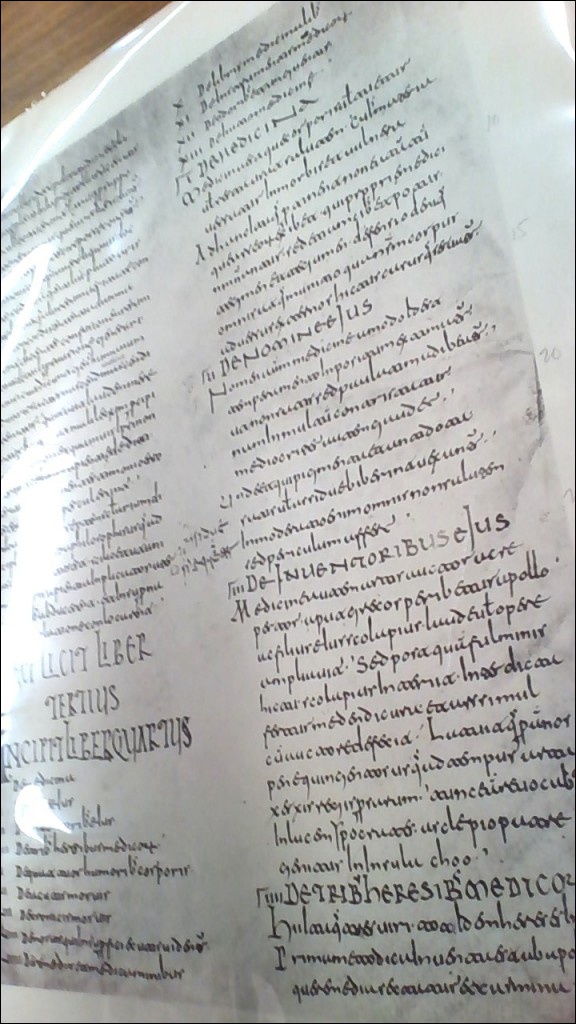 (2)    Then, there is a part that is a palimpsest (fols. 64-70 and 87-118), written in Visigothic minuscule script, erased (“so hard that even with ultraviolet light only a few words can be differentiated”), and re-written in the late 12th century in Caroline minuscule.

(3)    And a last third part, attached to the older content to substitute lacks (quires that were missing) in that late 12th century in Caroline minuscule that has glosses in Visigothic minuscule script (see the example of fol. 76 v. from Millares 1999).

(1)    Part 1, looking at fol. 38v, is a Mozarabic Visigothic script (meaning, the regional variant of Visigothic script used in the south/Toledo/Mozarabic centres), more likely from Toledo. For this part of the codex, Ewald-Lowe, Lowe, Antolín, Mundó and Millares said 9th-10th-11th c. Placing/Dating Mozarabic manuscript examples is difficult; in these centres, they were very aware of preserving the tradition, aka. Mozarabic rite & Visigothic script (note: the last codex in Visigothic script comes from Toledo, 14th century!). Personally, I think that the 9th century is too early considering the general shape of the script; it is too thin. 10th century seems almost right… I will go with late 10th-early 11th. [Again, without seeing the whole codex, I am just guessing trying to help the person who requested my help].

(2)    As for part 2, this is the part for which Diaz clearly stated late 11th c. and Astur-leonese area while Mundó said early 12th century Toledo.  I do not have an image here, but, (again) personally, I trust Mundó more than Díaz, I was taught in his school. It is hard to believe for me of him being wrong.

It will be very helpful to know when the volume, as it is today, was put together for having an ante quem date.

So, as you can see, there are problems with the catalogue, of course they are! Divergences that are difficult to overcome, but we –palaeographers working with Visigothic script manuscripts – are doing our best. I do not think it is just the problem of dating/localising the script, that also, but a problem of lacking of collaborative, interdisciplinary works. I have not seen miniatures in this factitious codex to ask for help from art-historians, but I am sure that those who are working reconstructing the schema of the Etymologies using the Visigothic exemplars may give very helpful clues to unveil, at least a bit, the mystery.

All the above to say that, if you are using the catalogue, thank you so much, and if you need to discuss the manuscripts you are using, please contact me. Glad to help.