Summary of the paper “The regional study of Visigothic script: Visigothic vs. Caroline minuscule in Galicia”.

Earlier this month I was giving a paper in Berlin at the 19th Colloquium of the Comité international de paléographie latine [for those of you who do not know it, you can join APICES – Association Paléographique Internationale. Culture. Écriture. Societé, which is the “public” counterpart of the Comité and runs a very useful mailing list – also has a journal]. The meeting had as main theme „Change“ in medieval and Renaissance scripts and manuscripts.

“Change” is history. It occurs in every aspect of human culture: political, technical, theological, ideological, legal, literary, etc. It can affect a single person, a group or an entire society. It has multiple temporal dimensions, from immediate decisions to long-term consequences. It is a process, which can be described and explained as the result of individual action, but also as the outcome of anonymous, collective, transformations. Like other sciences, palaeography and codicology have gradually developed their own concepts and terms to analyse change in medieval and early modern scripts and manuscripts. Some of these endeavour to offer more or less ambitious explanatory models, either for specific phenomena or for general trends. Many others are essentially descriptive, typological and chronological, but they too refer to implicit theories of historical evolution. All these notions deserve to be tested and discussed. “Change in medieval manuscripts” can refer to many phenomena, on different scales (a scribe, a scriptorium, a wider context). These are mostly intertwined and can be studied as causes or consequences of one another, e.g.: the structure and style of scripts; the visual and material appearance of books; the social organisation and economy of writing and book making; materials and technical processes; processes of disseminating, preserving and using written works… Preference will be given to proposals offering not only descriptive approaches but original reflections and interpretations, e.g. on the following: evidence of change; explanations of change; change as a turning-point (periodisation); factors facilitating or hindering change.

You can read abstracts of all the presentations given here.

There was also an exhibit at the Staatsbibliothek zu Berlin: „Anatomy of Letters“ by Sigríður Rún. Really fascinating, check it -> here and here. 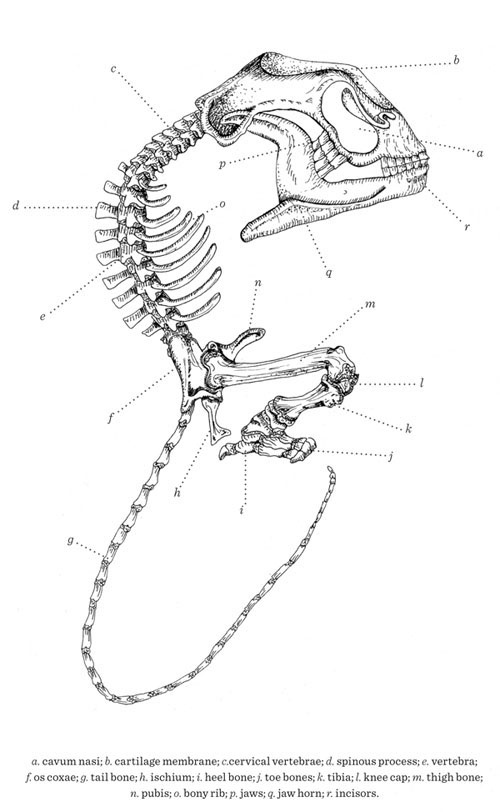 As could not be otherwise because of the organizer, the quality of the speakers was astounding. I particularly enjoyed the papers by Peter Stokes, Irene Ceccherini, Carmen del Camino, Colleen Curran, Orietta Da Rold, Martin Schubert, Elena Rodríguez, and Dominique Stutzmann (presentation order), although almost all of them have been useful for my research either because of the methodology applied, the main conclusions presented, or just the brainstorming to which they led trying to shed light in solving the “change” query from different points of view and different corpora. In a couple of years, more or less, I guess we will have the proceedings published; I will cherish this book as many of the previous ones [the 1987 colloquium was almost entirely about Visigothic script, see]. 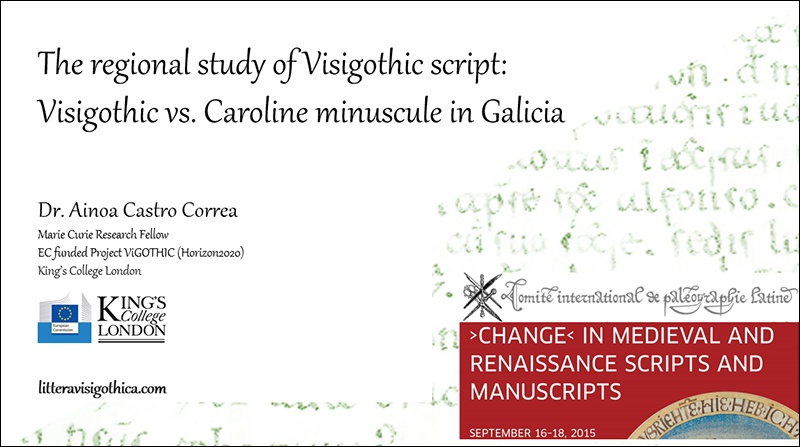 Visigothic script at the 19th Colloquium of the CIPL

My paper was entitled “The regional study of Visigothic script: Visigothic vs. Caroline minuscule in Galicia”, and, as it suggests, it was about the graphic change but from a different point of view. Here is the abstract:

The last three decades of the 11th century were, for Galicia, a crucial period of cultural and political change. The effective political incorporation of the territory as a county of the Kingdom of León-Castile resulted in the replacement of the traditional local nobility for new aristocrats more consistent with the French preferences of the monarchy and the ecclesiastical elites. At the same time, this new centralized management promoted open paths for the massive arrival of European culture, leading to, among other things, the change from Visigothic script, the common writing system used in the Iberian Peninsula and Septimania from at least the early decades of the eighth century, to Caroline minuscule, the supra-national handwriting spread into general use throughout Europe. But, how did the scribes perceive this cultural and graphic change and adopted it?

Through the graphic examination of the first charters written in Visigothic script with Carolingian influence (c. 1070) to the first ones already written in the new script (c. 1110), this paper seeks to evaluate the impact that the change of writing system, from Visigothic to Caroline, progressively carried out reinforced by the central government and the new nobility, had on the scribes working in the main two Galician production centres, the sees of Lugo and Santiago de Compostela. It will be discussed the meaning of changing scripts for the scribes who used them; for the generation trained in Visigothic script that was driven to change its habits adopting the new writing system as well as for the new generation of those who learnt to write directly in Caroline minuscule within Galicia or, trained abroad, came to these main sees to develop their professional career. It is intended to deep in the social status of those two groups, asking if there were social differences between scribes from the old and the new scripts, and to debate how, through the graphic examples preserved, we can suppose their interaction was.

As a final point, the cultural context in which the graphic change was framed will be broadly discussed; how the rhythm of adaptation was and how it affected the political milieu in which Lugo and Santiago were in relation to the central government of the kings of León-Castile.

My point. These 3-days colloquia are exhausting for everyone and I did not want to overload my colleagues with a large amount of data and images analyzing every single aspect of the process of graphic change from Visigothic script to Caroline minuscule. Rather, I wanted to encourage a collective discussion by asking some general unsolved questions which can be extrapolated to any period of graphic change:

[update January 2016: The paper will be published in A. Castro Correa, “The regional study of Visigothic script: Visigothic script vs. Caroline minuscule in Galicia”, in ‘Change‘ in medieval and Renaissance scripts and manuscripts: proceedings of the 19th Colloquium of the Comité international de paléographie latine (Berlin, September 16-18, 2015), Turnhout (in press)]