Earlier last week an Academia.edu colleague, Peter Kidd – thanks also to Ed van der Vlist for his reminder – let me know about a charter in Visigothic minuscule script coming up at Christie’s auction next November (lot 15). Quickly, thinking that perhaps it might have an affordable price (I know, but we are allowed to dream…), I ran to check Christies’s catalogue and this is, briefly, the information the piece has: 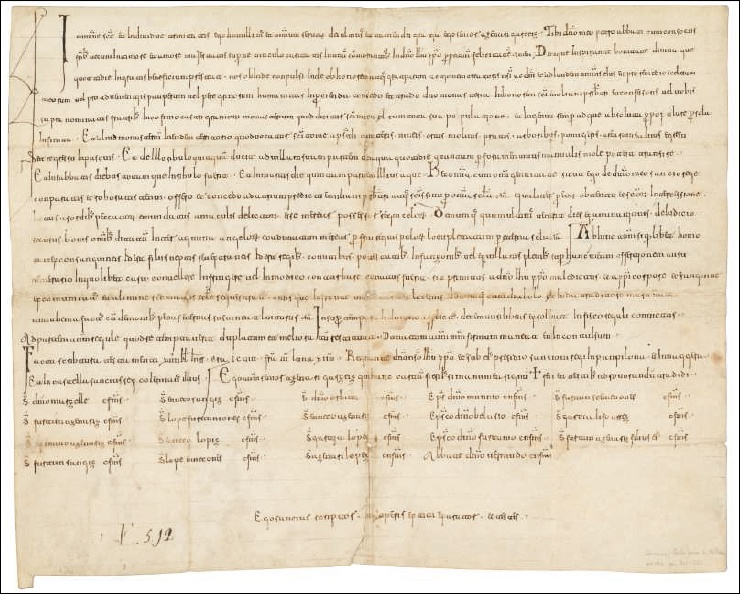 (a) The upper abbey at San Millán de la Cogolla was founded in c.574 on the site used by St Emilianus (who is named in lines 4 and 9 of the document). The reverse has a contemporary endorsement in Latin ‘Carta de sancti mikaeli de granione’, and one of the late 13th or 14th century in Spanish ‘Carta de la heredades de la iglesia sant migel de granano’, and others of later centuries, in different positions representing the different ways in which the document has been folded and stored.

The charter is a grant by Aznar García to Abbot Peter and his brethren, for the honour of San Millán de la Cogolla, of the monasteries of San Miguel and San Tom, both in Grañón … signed by the scribe Sancho: ‘Ego Sancius scriptor huius operis extiti exarator et testes’ (lower margin). The names of 19 men who confirm the document are listed … The charters of San Millán were edited in 1930 by L. Serrano, Cartulario de San Millán de La Cogolla, 1930, pp. 201-3, no 194…

The charter was written in Visigothic minuscule script, probably at the same monastery (San Millán). Checking the bibliographic reference (pp. VIII-X), it is known that it was kept within the holdings of San Millán until, at least, the second half of the 18th century when, according to the Collection gathered under the name ‘Colección P. Minguella’, the original charter was already missing. (note: the archive reference E.5.12 must be, therefore at the latest, from that century). The text of the document was preserved because it was copied at least in one of the two diplomatic codices of San Millán – the ‘Becerro gótico’ (in Visigothic script, lost circa 1883), and the ‘Becerro galicano’ (fol. 76, no 244; Caroline minuscule script, still in the monastery) –, and from them to the aforesaid Collection (no 219). 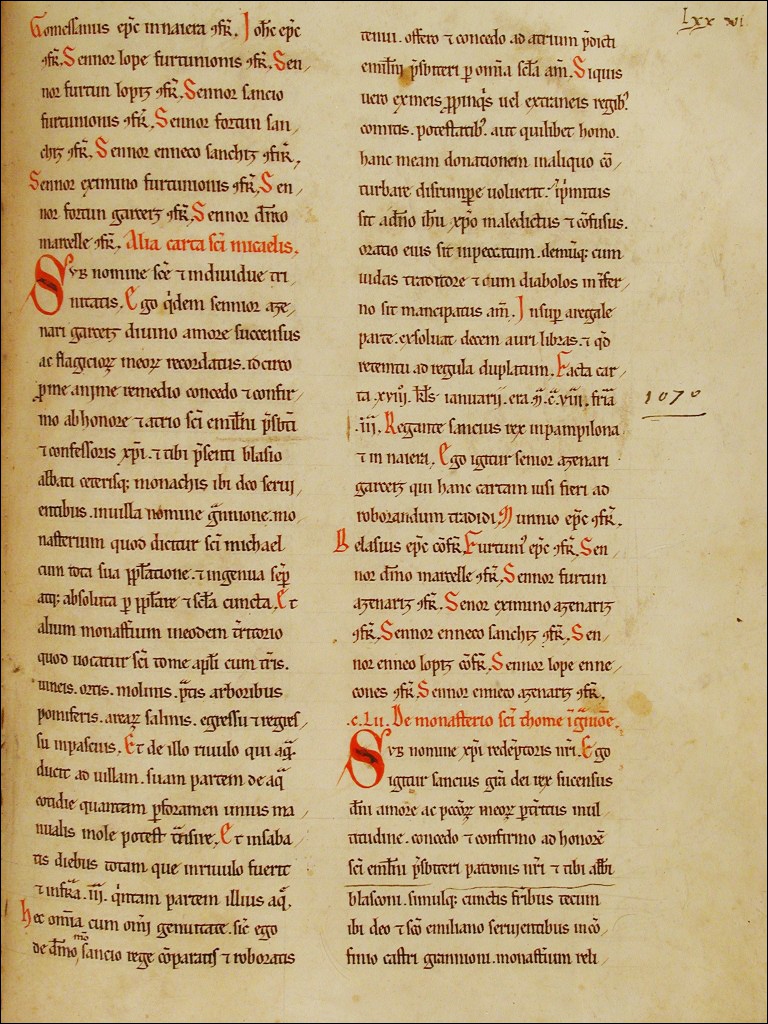 Thus, somehow the charter disappeared from San Millán in the 18th century and arrived to private hands, when, in 1970, it was sold at Sotheby’s together with a close younger brother. While the other charter was sold again in 1997 (where is it now?), this one arrived to the Mark Lansburg Collection in 1990 (? I don’t know this collection) before returning to be, now, on sale.

Several things come to my mind: