How did the change from Visigothic script to Caroline minuscule reflect historical changes of the Iberian peninsula?

I have been posting lately about Visigothic script in transition to Caroline minuscule, addressing the topic by considering the medieval roads of Galicia by which the influence of the new writing system “physically” arrived, and showing how this interaction took place graphically speaking. In order to complete the approach, it was pending to write about the context of change from one script to another, explaining how Caroline arrived and the aspects to be considered in studying its introduction along the Iberian Peninsula.

It took me a while to feel confident enough to write about it trying to condense everything, but, finally, I think I get it. So, here we go! I have divided this post into two parts: the first one is a general approach to the topic considering the Peninsula as a whole, and the second one will be specifically focused in Galicia, highlighting how the context was graphically reflected there in a different way between main production centres.

[If you are an undergrad – in Spain Palaeography is taught within the core course of the BA in History – and just want to keep it simple, go to the end of the post.]

The trans-Pyrenean influence seen in the gradual adoption of the new supranational writing system, Caroline minuscule, was attested in the Iberian Peninsula long before the first written testimony in the new script was drawn in the Astur-Leonese kingdom. As Mundó, Díaz y Díaz, and Vezin [1], among others, have largely discussed, there were codices in Caroline minuscule script circulating in the Christian and, since the 8th century, Mozarabic centres, whose direct influence has been observed on written testimonies in:

The final change from one writing system to another took place, though, after a slow and gradual process of contamination, in different stages in each area of the Iberian Peninsula as a result of religious and cultural aspects combined as well as specific political circumstances.

In Septimania and the Catalan counties, strongly connected to the Carolingian Empire given its involvement to stop the Muslim advance, Caroline minuscule was adopted first, in the mid-9th century. This connection motivated the fluid arrival of trans-Pyrenean texts, as a result of the logical interaction of people and ideas [4], in the new script and, also, codices in the new Roman rite, before its, more or less mandatory, replacement.

The new territories recovered from the Muslims were not only politically added to the Catalan counties but ecclesiastically attached to the Narbonne’s metropolitan see. As a consequence, the new  rite – Romano-Gallican-Old Spanish as Reynolds [5] calls it given the amount of Old-rite texts on it – was gradually introduced on its reclaimed or newly built dioceses, first in the cathedral schools to finally reach the parish centres, and, to spread the new liturgy, codices, written in Caroline, were needed [6].

These factors contributed to the continuous and gradual intensification of Carolingian influence, which led, through the contamination between graphics systems, to the decline of Visigothic script, and, finally, to its disappearance. 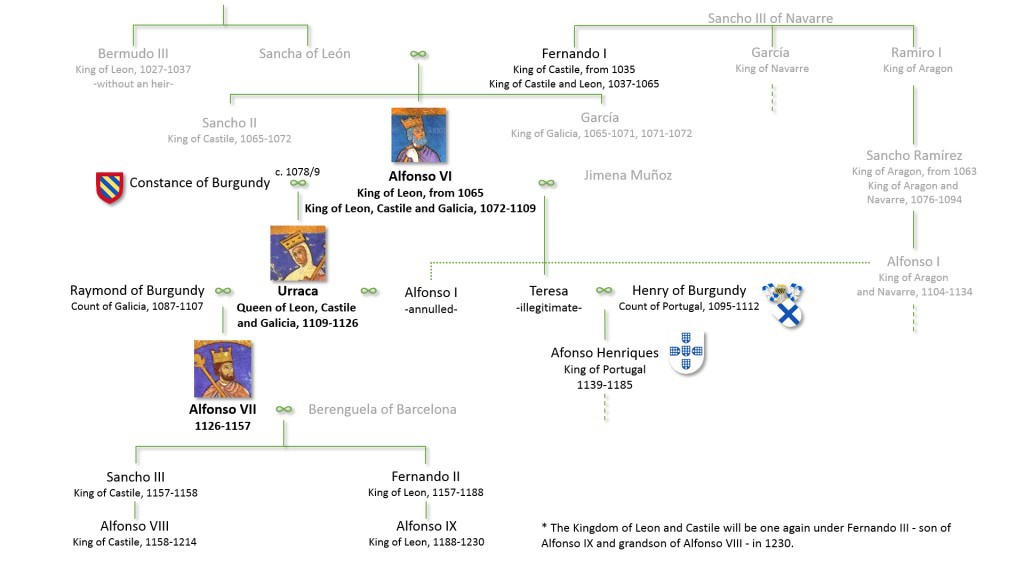 Two centuries later, in the mid-11th century, the same process took place in the Astur-Leonese territories. The equivalent interrelated aspects can be seen here as well.

The connection with France initially arrived because of the strong French ties of the Navarre dynasty, which happened to substitute the Astur one in the person of Fernando I, closely linked with Cluny [7]. Thereafter, the Cluniac monks were granted with episcopal and abbatial sees enabling the liturgical unification advocated by Pope Gregory VII (1073-1085), reinforced by the presence of papal legates, and codified [8] in the Synod of Burgos in 1080.

The influence of Cluny can be seen also in the marriages of Alfonso VI (king of Leon, Castile, and Galicia after dethroning his brothers) with Agnes of Aquitaine and, mostly, with Constance of Burgundy, niece of the abbot Hugh of Cluny. Also from France noblemen arrived at the kingdom to fight against the Muslims – Almoravids now, who were called by the Taifa kingdoms as help after the Christian conquest of Toledo in 1085. Particularly relevant for Galicia were Raymond of Burgundy, who married one of the king’s daughters, Urraca, who will succeed his father – Raymond will eventually be rewarded with the title of count of Galicia in 1087 –, and Henry of Burgundy, Constance’s nephew and Raymond’s cousin, who married the illegitimate daughter of the king, Teresa – he will be named count of Portugal in 1095 and their son will be the first king of Portugal, Afonso Henriques.

But, if this French connection was not enough, the pro-European politics of Alfonso VII, queen Urraca and Raymond’s son, were also enhanced by his efforts and dedication to improve and secure the apostolic see of Santiago, taking thus advantage of the ecclesiastical situation in Galicia to reinforce his power [9]. All these ties with France assisted the change from Visigothic to Caroline minuscule. As in Catalonia, the liturgical Reform involved a massive arrival of books with the new  rite [10] written in Caroline minuscule to be copied in the Iberian Peninsula, either for the local clergy, using a more or less contaminated Visigothic script, or for the newly arrived one, used to the Caroline minuscule system, or even for scribes first educated in the Visigothic but who have also learned the new script and were thus able to use it, interchangeably, with mixed elements of both traditions.

Neither the abolition of the Mozarabic rite, nor the Synod of León in 1090 [11], nor the massive arrival of Carolingian texts were by themselves the determining cause for the disappearance of Visigothic script, as it is clearly pointed by the existence in the 11th and 12th century of codices of the Roman liturgy copied in Visigothic script, as well as its graphic prevalence in areas such as Galicia, Portugal and Toledo. The process of change was the result of a confluence of reasons and it took place gradually, as can be perfectly seen in analysing the script used in the royal chancellery: as scribes were appointed royal notaries from different centres throughout the kingdom, some versed in Visigothic, some in Caroline minuscule, and some in a mutually influenced script and style, they continued to use their script working for the queen (Urraca) and the kings (Alfonso VI and Alfonso VII in Spain, and Afonso Henriques in Portugal), a situation which emphasises the meaning of the learning process and the development of schools in ecclesiastical centres, thus, the study of the regional variants and their different cultural contexts.

Do not miss my next post to see how the reaction to this historical context was in the main cultural centres of Galicia… It is juicy!

[8] It seems that the first attempts took place before the Synod itself, since codices with the Roman rite were copied in Visigothic script in the Astur-Leonese kingdom in the 10th or early 11th century, meaning that “the change of rites or acceptance of Roman-rite books was taking place gradually in Spain itself (before the Synod)” (R. Reynolds, Baptismal rite, 262-3, note 23), maybe by Cistercian influence early established coming from Navarre (Sancho I el Mayor) or Catalonia. Thus, the Synod of Burgos would contribute to reinforce the change which would take place gradually. About the meaning of the successive Synods in the 11th c.: G. Martínez Díez, “La Iglesia de las normas: el Derecho Canónico”, in XXXII Semana de Estudios Medievales. La reforma gregoriana y su proyección en la cristiandad occidental: siglos XI-XIII (Pamplona, 2006), 53-97.