Which are the aspects found in Visigothic script manuscripts that tell us about a Caroline minuscule influence?

In my last post, I wrote about how Caroline minuscule script spread across the Kingdom of Galicia thanks to the routes of cultural exchange opened with the Camino de Santiago. I also discussed why, talking about Visigothic minuscule in transition to Caroline minuscule, the graphic influence was different comparing the two major medieval cultural centres of the Kingdom, Lugo and Santiago, and that this difference can be seen not only in the sees but also in the centres/monasteries under their control. I still need to work closely on the political implications of this situation in order to develop a little more the theories exposed.

Starting with the easy part, the Visigothic minuscule variant in transition to Caroline minuscule script is the one that, being mostly Visigothic minuscule, shows some features that are specific to the Caroline minuscule writing system. This ‘carolinisation’ can be seen in the general aspect of the script, increasingly rounded, in the incorporation of isolated letters (uncial a or elongated s), as well as in the orthography used by scribes (no longer use of I), but it is quite more intense in the abbreviation system. Thus, scribes categorised under this variant tend to use:

Regarding chronology, this variant is registered in Lugo since the last decade of the 11th century (the first example is dated in 1091), while in Santiago it can be found since 1070. (Visigothic minuscule is preserved in charters from around 1020/30 in both episcopal sees.)

Now the tricky part. Given the amount of external influence that the diocese of Santiago ‘suffered’ since the political impulse of the Camino de Santiago, in this territory can also be distinguished a cursive variant in transition to Caroline – among other mixes – since the mid-12th century. The Carolingian features adopted are focused in the abbreviation system too. I can understand the influence, but it looks really really odd! 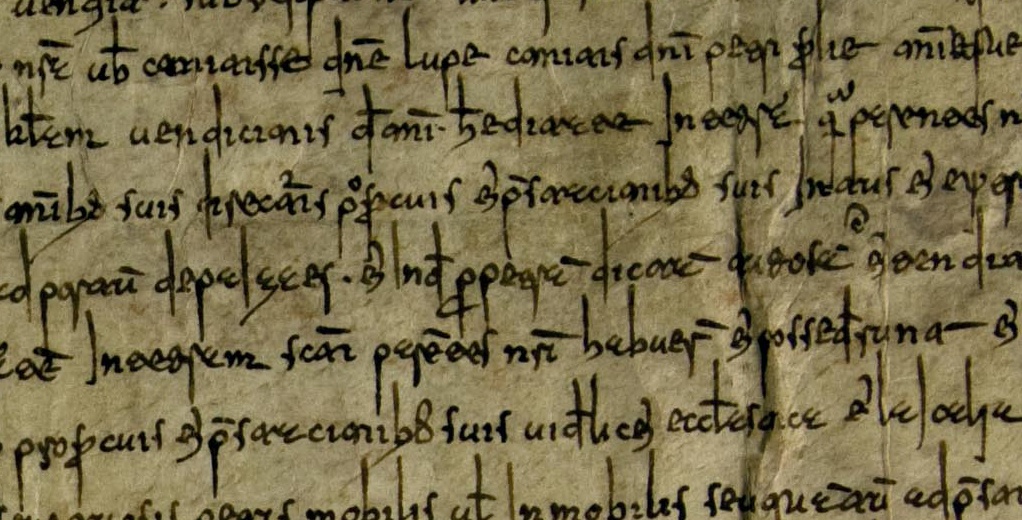 Finally, some lines about the reverse influence between scripts, meaning the features that can be seen in Caroline minuscule (and even later! See this tweet) examples coming from the Visigothic script.

The first examples in Caroline minuscule script for Galicia are from the second decade of the 12th century (1113), being, therefore, the most usual script from the mid-century onwards, although Visigothic script was still in use until the end of the century (1198) and even after (the last example for Galicia is dated in 1234). Thus, there is almost a century of exchange between both graphic systems. The features I usually find in Caroline minuscule manuscripts that do not belong to are:

So, summarizing, since the early 11th century onwards [1], scribes were trained in the two typological variants of Visigothic script as there is influence from the cursive in the minuscule and, moreover, some charters have been preserved from the same scribe using both typological variants. Regarding Caroline minuscule, since the late 11th century onwards, in some specific well-developed cultural centres such as the ecclesiastical sees, they could possibly have been trained in the new script too, explaining the strong influence of the “Frenchy” in the Visigothic script system. Thus, during the 12th century, some scribes were primarily trained in Visigothic script and then learnt Caroline minuscule, while, at the same time, the new generation was trained directly in the latter system, but, as they were surrounded by manuscripts in Visigothic script, their eyes caught some features that were included unintentionally in their texts.

One thing that, unfortunately, we will never know is what they thought about these mixes in the same text: did they know that some features were mixed? Did they care or they were just concern about making a tidy text without being careful in showing ‘respect’ for the script itself (following the rules)? Which were their insights about the writing systems?

In the next post, I will write about the political implications of changing the writing system and I expect to show you why scribes from dioceses as Lugo reacted against it.

[1] I need to consider the cultural centres to which scribes using semi-cursive script belonged. There are examples of this variant since the late 9th century but I think it is contamination; I find it difficult to believe they trained also in both variants. I need to work deeper evaluating the features that were included from one and the other variant making this particular mix.