What happened when a fire destroyed all the legal documents of an archive? How did these archives preserve their memory?

Speaking about legal acts, during the Middle Ages as today what was written, subscribed by witnesses, and signed by a scribe acting as a notary was the truth. In the change from the 9th to the 10th century, oral agreements were no longer valid and even the smallest transactions, let along significant donations, needed to be recorded in handwritten charters and validated accordingly to have any veracity both in the present as in the future. A written document was a necessary part of the transaction whenever property was sold or exchanged, a dowry or a will established, a child adopted or a slave freed. The right to property, payment of a fine, loans, and oaths were also witnessed by a document. In case some argument against the ownership of a specific land or other movable or immovable property took place, these manuscript testimonies were the only legal way of solving the problem, their showing fundamental to solve the conflict. In consequence, thousands of primary sources were carefully preserved throughout the centuries, mostly in monastic and episcopal archives, then in private archives as well, and referred to in case of dispute. But, what happened when one of these treasured written muniments went missing, either by latrociny during wars (and not only then), fire or other misfortunes?

Fires, accidental or not, were one of the most significant causes of the loss of medieval documentation.

A charter from the Cathedral of Lugo dated 1027 (Lugo, Archivo de la Catedral, libro X de pergaminos, legajo 2, nº 7), provides a good example of what may not have been an unlucky accidental fire. The charter records a confirmation made by King Alfonso V (999-1028) to Bishop Pedro I of Lugo (1022-1058) of everything his ancestors had granted the see in the past, in addition to restricting the potential activities of royal officials on Cathedral’s property. Thus, a crucial document for Lugo. It was written because, as its text informs us, the institution had recently lost most of its valuable documents as a result of a fire, and, of course, the cathedral needed written guarantee of its privileges. In this case, there is nothing against the veracity of the document.

Some other testimonies of, not at all accidental, burning of charters appear here and there in medieval and modern documentation. Famous is the diabolic rage that moved the Rapidániz family to burn out all manuscripts found in the archive of the see of Astorga (confrontation over property) in the mid-11th century, as it is the disastrous situation in which the liberal uprising of 1846 left the monastery of San Martín Pinario in Galicia [see this post, “The war and the manuscript”, with a description].

Why did I say that it seems that the fire was not accidental in the Lugo example above? The same document testifies latrociny. Following the text, with the fire Bishop Pedro became aware that the charter issued by King Vermudo II (985-999), was no longer in the archive, being missing because burned or by being stolen by an omine maligno. He promptly talked to Alfonso V, who agreed to arrange a new charter. However, the charter did not perish since it is still kept in its archive today (Lugo, Archivo de la Catedral, libro X de pergaminos, legajo 2, nº 5); it was then mysteriously returned at some point.

Lugo did lose several charters though, or rather this was what it wanted to make others believe, since in the late 11th century various documents considered forgeries were made justifying alleged lost royal donations – for example, the grant by Alfonso III to the Cathedral in 871 (Lugo, Archivo de la Catedral, libro X de pergaminos, legajo 2, nº 1). In the early 11th century Lugo was still the main see of Galicia, keeping the metropolitan dignity, whilst the late 11th century was a difficult time because of the restoration of the sees of Braga and Orense and the subsequent loss of privileges. It was thus at this point that the see most needed its forgeries.

Forgeries and interpolations are a well-known inhabitant of medieval corpora (especially that of the late 11th and 12th century). A large array of examples can be found, ranging from the saga of charters about bishop Odoario, who allegedly flew from Nord-Africa with his entourage to settle in 8th-century Galicia reconstructing almost everything, to the 12th-century charters made in a time of need for justifying ecclesiastical borders in dispute, including the very colorful characterization of early Muslim attacks as dragons spitting fire over the mountains (as a real fact that happened, seriously). Some forgeries are evident, some others are really challenging having only scarce proves of their truthfulness or untruthfulness. To ascertain the diplomatic and textual veracity of charters is an art (of course, also a science: Diplomatics).

How difficult was to produce these new testimonies of the past? If the lost charter was issued shortly before being destroyed or stolen and some of the witnesses remembered its exact content, that was enough to make a new “exact” version of it [read more about the process of writing charters here]. Examining the examples, it can be guessed that provided that the interested party was pious, had money, some political weight, a scribe, and the correct friends, it should not have been so difficult to elaborate forgeries, and convince everyone around if needed, as long as no one ominously important was against to whatever the text certified. But when testifying in an altercation, written testimonies were not only required but also evaluated. Some very difficult situations might had happened when institutions presented as authentic imitative copies (script was also checked, as said in the Lex Visigothorum II, 1, 12), and if proven forgery, the punishment could be high (a fourth of all the criminal possessions or even slavery; Lex Visigothorum VIII, 5, 2). 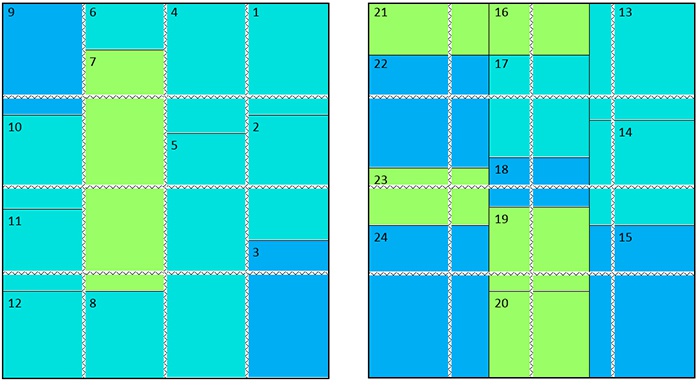 Distribution of charters copied on one of the Caaveiro’s cartularies: blue-ish for Visigothic script copies, green-ish for Caroline minuscule ones | Barcelona, Biblioteca de Catalunya, mss. 3567 A (croquis) © Ainoa Castro Correa.

At the end of the 11th century, bearing in mind the considerable amount of written sources of some archives and their crescent importance for the administration, ecclesiastical institutions vigorously started to make copies. And they did not just duplicated charters writing other charters but compiled all past written production – or at least the most significant information – in codices. These codices, called cartularies, are – summarising a lot – the medieval counterpart of nowadays diplomatic collections of charters; all the selected documents were subsequently copied following a thematic, chronological, geographical, or by noble families order for further use. If the original charter went missing, the institution would normally have a copy on its cartulary. Also, to the misfortune of all of us early medieval palaeographers and/or medieval historians, at the same time cartularies were made, originals tend to be destroyed since cartularies were, besides presenting the material in order, written at least in Caroline minuscule, much easier to read than Visigothic cursive [read more about cartularies here].

Thank you for posting this, Ainoa!

Thank you for reading Jonathan!