Why a Network for the study of Visigothic script?

Although there is a catalogue of codices written in Visigothic script published in 1999 – from which I have made an online version updating the archive files and adding links to their digital surrogates when available –, the information we have for each one of the 359 books identified is, in most cases, far from accurate or reliable. It is not only the lack of specific studies for some codices but also the inherent difficulties of their study which explains this situation. Approximately 310 of these codices have no colophon to use to date and locate the codex itself, and for those which provide this information, allowing us to date the first ones by comparison, no detailed graphical study has been published. This is not because such studies have not been made but because, unfortunately, the tools needed to share the information have not yet been well developed and disseminated.

There are also thousands of charters written in Visigothic script. Their study would also help to contextualise those codices since the same scribes who wrote codices wrote also charters. But there is no database of charters. There are, however, several collections of charters grouped by production centre, although they have been gathered and published mostly for historical purposes and not for palaeographical ones; thus, without including detailed information about the graphic characteristics of the script used by each scribe.

Consequently, there are many sources in Visigothic script that would allow us to deepen our understanding of the cultural, historical, economic, social and political context of medieval people throughout the Iberian Peninsula and Septimania that cannot be used since they have not yet been gathered, dated and localised.

The situation regarding the study of Visigothic script and peninsular medieval manuscript culture is disturbing if one thinks in the “big picture”; all that still waits to be studied. We lack interdisciplinary research gathering manuscript studies as well as history, linguistics, literature, music or art, to name but a few. But there are great previous studies which have helped and will continue to help future research [take a look]. Would you like to be part of this Network and help change the current state of the art about Visigothic script? This is the first step in organising a network for studying Visigothic script and the more the merrier!

How can you collaborate?

With this site, I am trying not only to make the scientific community aware of the need to devote their attention to the study of Visigothic script, as to that of Insular, Beneventan, Merovingian or Caroline minuscule but also to directly involve other researchers. One person alone cannot change the current situation, but we all together can.

I am posting about the state of the art, about some particular codices and about my research. There is also a section on this site, the ‘Codex of the month’, dedicated to reviewing the archival records of the codices identified and digitised. I aim to share this information to promote discussion. I do not intend to impose my point of view – I still have plenty to learn –, but to provide a starting point for improvement. So, if you believe there is any inaccurate information on this site please contact me.

Littera Visigothica is a site OPEN to everyone. If you want to collaborate you can help me by…

* updating the information contained in the online catalogue,

* helping me with the ‘Codex of the month series’ if you happen to be working on a Visigothic script codex,

* editing some blog entries. - in this regard, I must express my gratitude to Nick Leonard, who is selflessly editing the website just because of his interest in medieval manuscripts. So many thanks, Nick!

Would you like to become a member of Littera Visigothica?

Silke Engelhardt – University of Heidelberg. Research interests: Hagiography during the Visigothic kingdom and the Early Middle Ages in the Iberian Peninsula (Mozarabic). [email] 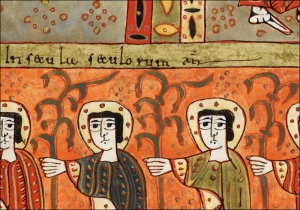