In the last #ERCproject update, I wrote about the project’s first output: a comprehensive database of medieval Galician charters. I discussed from where the idea to do it came from, how it began, developed, and the information you will eventually find on it once it goes live. I also shared some initial numbers about how many sources/documents we“ve found. In this post, I would like to delve a bit on these numbers, beginning with the diocese of Lugo and its 960 documents.

[brief note: What is a “document”? A document is a text preserved as single sheet of parchment (charter), as an original document or as a copy of it, or as a copy in a diplomatic codex. In our database, we consider “document” a manuscript of either category but only once. Meaning, if a document X is preserved as original charter, has a copy also in a charter and a copy in one, two or more diplomatic codices, for us it’ll be just one item. Of course, we’ve added a note in each case with all the references.]

It’ll come as no surprise to know that most of the documents on our list are linked to the see of Lugo (445). That does not mean, though, they were produced there, for the see absorbed monasteries and their archives at a quick pace from its early restoration in the 8th century. In the second stage of the project, we are to analyse each document to see in which type of centre it was produced; monastic, parochial or, indeed, at the cathedral. Medieval documents from the Cathedral of Sta María de Lugo are now scattered between its archive (charters) and the National Archive in Madrid (charters and the diplomatic codex known as Tumbo Viejo), although, since they preserved their old signature, it is possible to reconstruct the initial archival structure of the see organised by books.

The second institution that stands out is the monastery of San Julián de Samos (271 documents), funded already in Late Antiquity and restored in the 8th century. Samos is one of the oldest and most important monasteries of Galicia. Unfortunately, most of its documents are lost, only some preserved through its diplomatic codex - also lost until recently - now kept in the Archivo Histórico Universitario de Santiago de Compostela. There are some charters kept at the National Archive in Madrid.

In third position we find the monastery of Santa María de Meira (199 documents). Despite its late foundation in the mid-12th century, Meira accumulated territory quite fast thanks to patronage from nobility and kings and the impulse given by its addition to the Cistercians. Its medieval documents come from the 17th-c. diplomatic codex kept in Madrid with very few original charters. This is a good example of the rule; once an institution decided to build its diplomatic codex, single sheet charters were dismissed.

Finally, we have some small institutions that still have some early medieval documents, as the monastery of Sta María de Ferreira de Pallares, Sta María de Penamaior, San Vicente de Pombeiro and San Salvador de Asma, among others.

Surprisingly, 194 of the 960 documents of this diocese - original charters, and single-sheet copies of them - are still unedited!!

As any researcher working with medieval sources knows, around the mid-12th century there was an explosion of written culture. Rest to say, we are aware that not all documents made have been preserved, but even considering the loses, something clearly happened in that period. Cathedrals and monasteries decided to organise their archive as diplomatic codices and took greater care in leaving written proof of what was going on with their domain. It comes as no surprise then to verify most of the documents date form that period and that they are mostly originals. 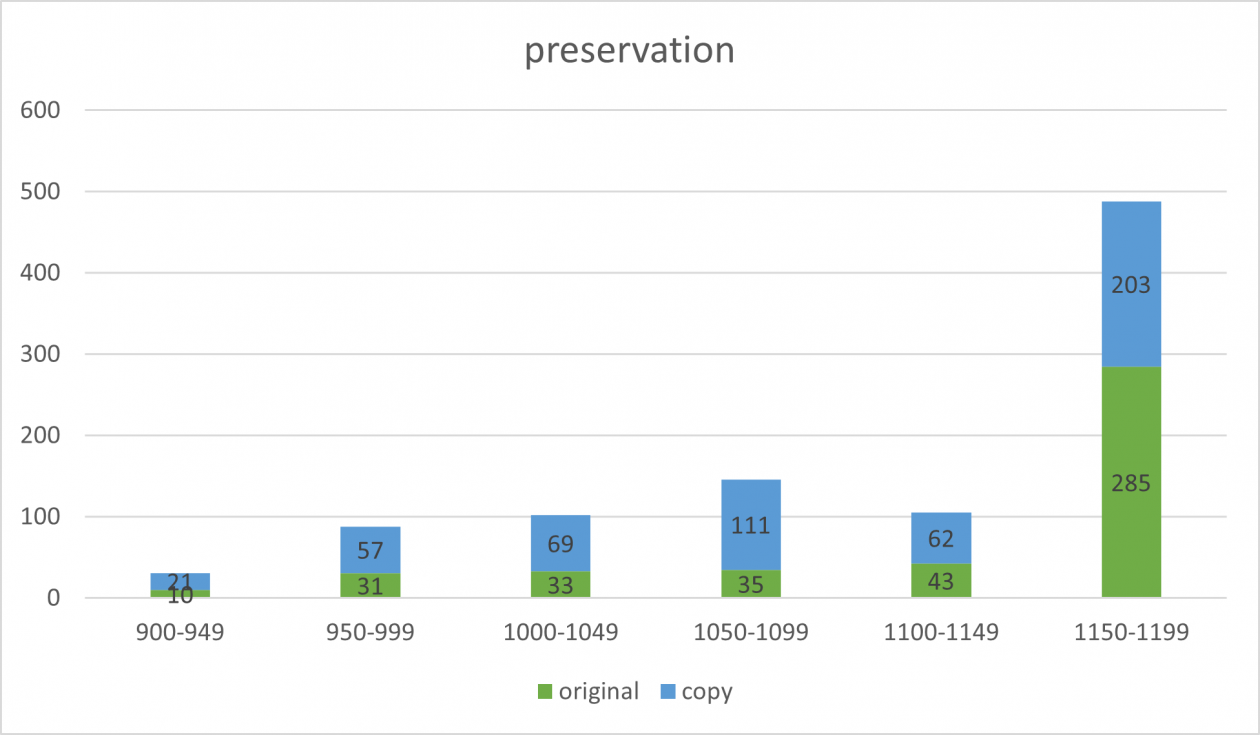 Most of the documents preserved are ecclesiastic; the Church was the universal keeper of archives so that is no news. Since we aim to uncover the real impact of writing on common people, we are leaving all these sources behind to focus on private documents. We have 188 documents from the diocese of Lugo that were produced for lay common people, no nobility or elites, and we are to analyse them thoroughly.

A small note. Looking at the type of document by action you can see that in the 12th century, together with the burst of written production came a change in tendency; monasteries could no longer survive or increase their territories by tradition, they needed to buy stuff. 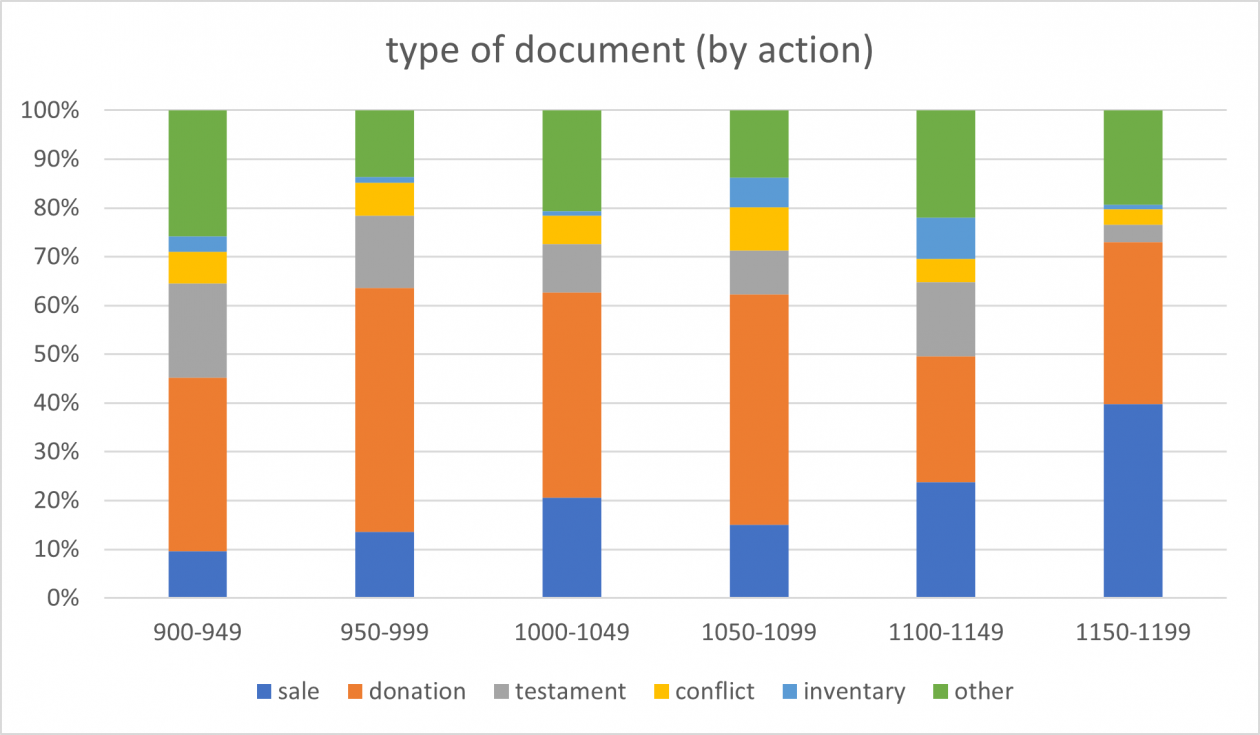 Since most documents have been preserved as copies, and they were mostly done in the late 11th or some time in the 12th c., the majority are in either Protogothic or Gothic cursive scripts. Original documents in any type of Visigothic script and Caroline minuscule are there, but they are a minority. One of the objectives of the project is to study the periodisation of scripts and their characteristics so we may have few testimonies but will try to get some significant data from them. 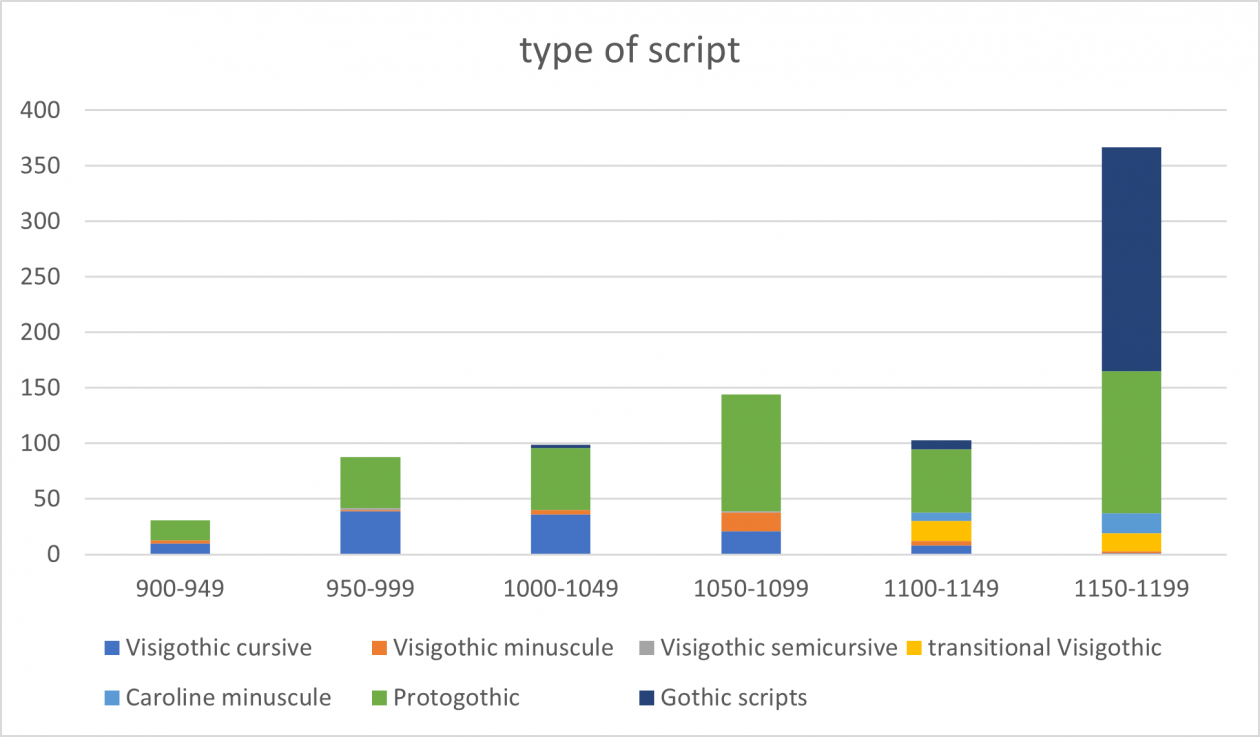