(1) The ‘Beatos’ as an introduction to the genre [click here], and

(2) The Codex, with the description of the manuscript British Library 11695 *

The Silos copy of Beatus’ work is undoubtedly one of the most beautiful of all those that have survived. Furthermore, it gives the impression that it left its creators’ hands barely a moment ago, for nine hundred years of history have left virtually no mark upon it (just three folios are missing from the entire manuscript).(Miguel C. Vivancos, Silos Beatus facsimile)

Why is the Silos Apocalypse important? Its beauty and excellent state of preservation would alone make this an important manuscript. But it also contains one of the oldest Christian maps of the world, reflecting the Roman view of things. East is at the top, and beyond the Red Sea is a hint of an undiscovered fourth continent that some ancient thinkers suggested must exist to balance Europe, Asia and Africa.

[See the figure above: The Beatus world map, with Adam, Eve and the Serpent in the Garden of Eden at the top. The Mediterranean is represented as a blue line in the centre, the River Nile as its continuation bending to the right, and the Red Sea as a vertical red line. Two rectangular islands at the bottom left are marked Britain and Scotland. Add. 11695, ff.39v-40r © The British Library] (British Library, Online Gallery Sacred Texts). 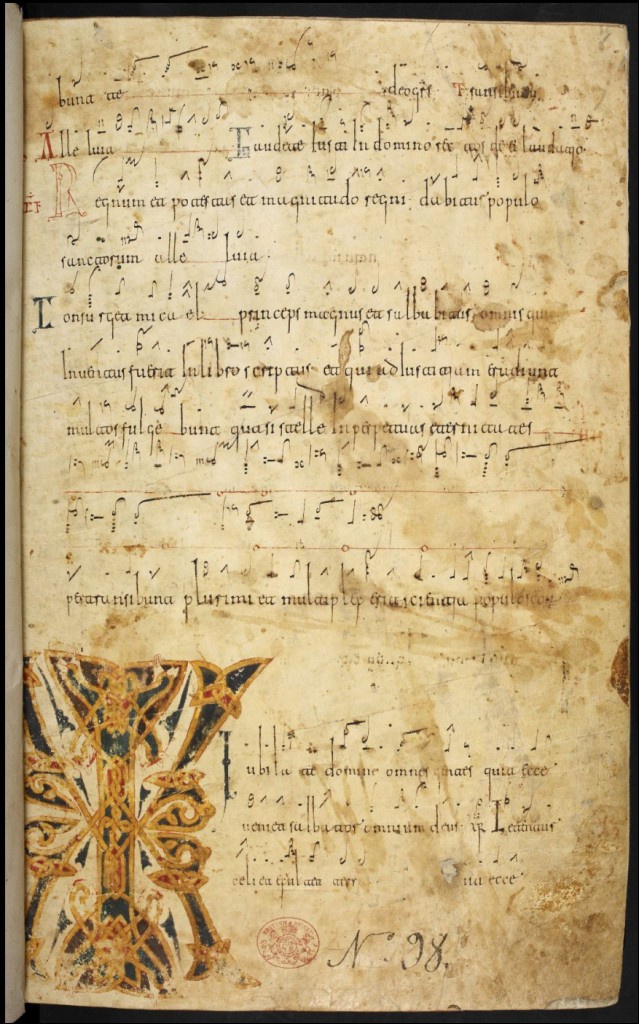 Fols. 1r-4v: Antiphonarium mozarabicum (10th-11th c.). Flyleaves added to the main codex coming from an antiphonary. The musical notation seems to have been drawn by the same copyist who wrote the text. Fols. 1r-v, the end of the mass of St Roman and the beginning of the first feria of Advent. The miniature of Hell added in folio 2r, originally left blank, was added by the same illuminator than that of the Beatus. The two crosses of Oviedo in fols. 2v and 3v belong to the original antiphonary. The anagram in fol. 4r, VPR (Vespertinum) corresponds to the first chant of Mozarabic antiphonaries being thus its first page. The anagram LUX in fol. 4v belongs to the first chant for the eve of the feast of St Acisclus (17 November), the first day of the Mozarabic liturgical year. 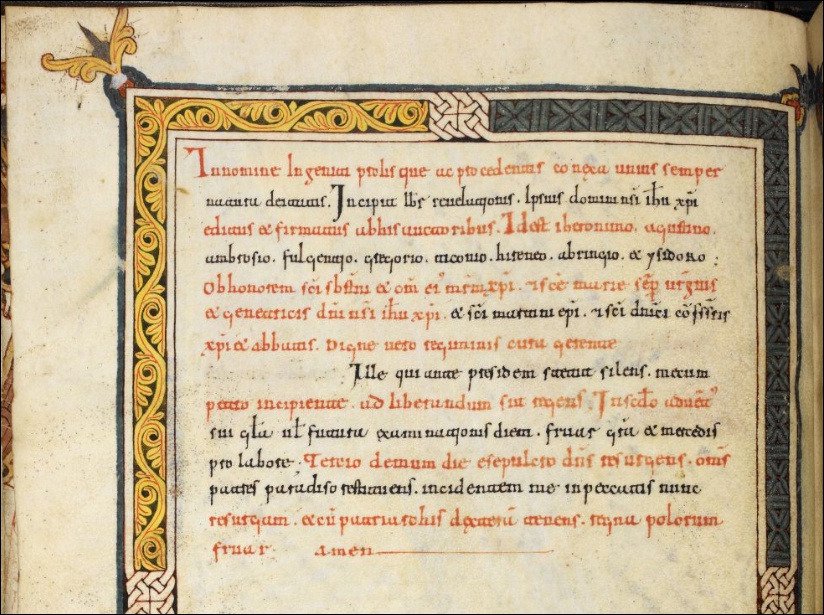 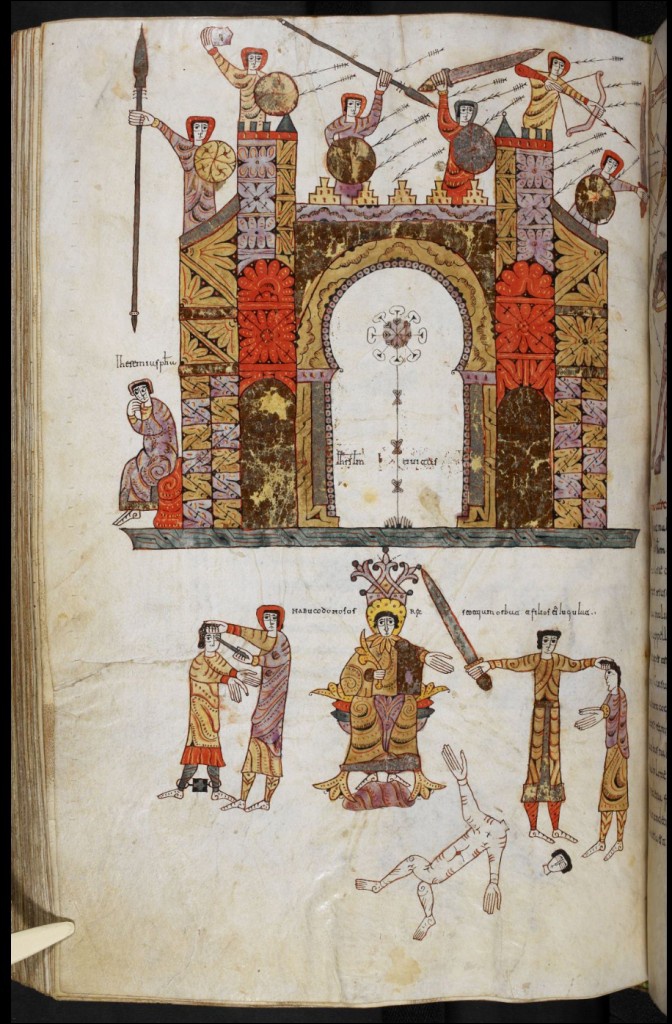 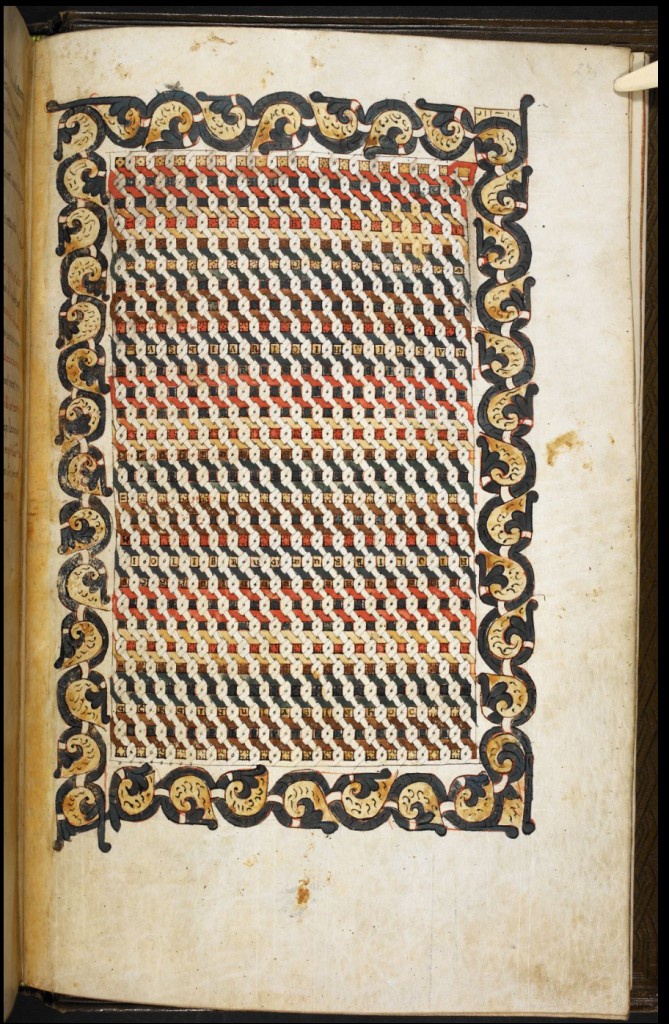 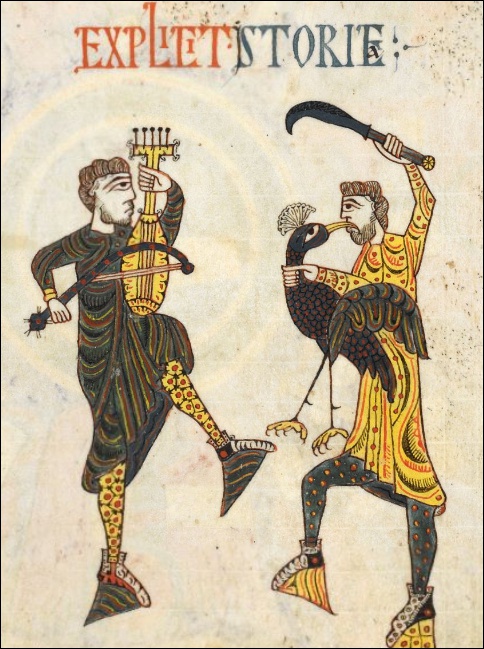 © The British Library, Add. ms. 11695, f.86r This miniature of two men dancing, one with a violin-type instrument and the other holding a bird and brandishing a curved knife, represents “la dansa del gall”, a traditional dance from the Pyrenees.

Copyist/s: The Codex was copied by Dominicus and Munio, likely commissioned by abbot Fortunio, who finished it at the sixth hour on Thursday, April 18th1091.

Illuminator/s: Dominicus and Munio must have passed the still unbound work on to the illuminators. The program of illuminations was started by an unknown expert and, after him, continued by prior Petrus (see fol. 6v), who finished it on June 30th or July 1st, 1109, being Iohannes the abbot of Silos. Colophons fols. 275v, 277v.

Numerous full or half-page miniatures in colours and embellished with gold and silver leaf with inscriptions explaining their contents. Small unframed miniatures or figures in the margins; 2 decorated tables (ff. 160v, 161v); full borders (ff. 6v, 7r). Major initials in colours with zoomorphic, foliate, and/or interlace decoration, with display script at the beginning of books and prologues. Initials in red. (See the archival file for a complete list of topics.)

Origin: It is not known where the Antiphonary was written. The Beatus was produced in the Monastery of Santo Domingo de Silos (Burgos).

Provenance: Being finished in 1109, the codex was still in Silos in the 14th century since the same hand annotated several manuscripts from this monastery’s library. The codex left Silos on an unknown date. In the 18th century, the Silos Apocalypse belonged to Cardinal Antonio of Aragon (b. 1618, d. 1650), who apparently donated it to the San Bartolomé School in Salamanca. When the School was abolished – dissolution of the Salamancan “colegios mayores” by Charles IV (1804-1808) –, the codex was taken to the Biblioteca Real in Madrid [The codex is listed in the index of the manuscripts incorporated into the royal collection by Antonio Tavira y Almazán, bishop of Salamanca, between 1799 and 1801 (inscription ‘No. 98’ (f. 1r) relates to its number in the index)]. It may be supposed that this is from where José Bonaparte (b. 1768, d. 1844) picked it up when king of Spain (1808-1813). He subsequently sold it to the British Museum on May 9th 1840 [List of Additions to the Manuscripts in the British Museum in the Years 1836-1840 (London: British Museum, 1843), p. 4].

Context: [See Adoptionism quarrel and the first part of this post] It has been argued that, since the Mozarabic liturgy faded by the end of the 11th century, around 1061 and 1085 in Silos, the incorporation of these pages at the beginning of the Beatus served as commemoration or preservation of the Hispanic tradition.

Last June I had the privilege of briefly take a look to the collection of manuscripts in Visigothic script kept at the British Library (16 between codices and fragments; see the list here). The visit was exceptionally interesting; almost all the information published to date about these codices seemed, after a first approach, not particularly accurate (or not accurate enough for me), especially regarding the attribution of origin (and, therefore, date) and hands involved in their copy. The news about this codex were the most striking for useful, moreover having perfectly identified authors and dates. Although both scribes, Dominicus and Munio wrote in the same script, Visigothic minuscule script, their writing can be easily individualised by an advanced palaeographer having one of the scribes clear influence from the abbreviation system of Caroline minuscule. Analysing their intervention in the codex, it can be perfectly seen how they both worked together, simultaneously, dividing quires. Now that the volume is bound, the last pages of some quires face the first page of the next one highlighting the graphic differences. It will be really fascinating to carry out a detailed palaeographic analysis to see who copied each quire to reconstruct how the codex was done.

Other exemplars of Beatus copied in Visigothic script:

[update July 2017: I have an article in press about this codex. If you are interested please take a look for I no longer agree with some of the things stated in this two posts. Thank you! A. Castro Correa, “The scribes of the Silos Apocalypse (British Library Add. ms. 11695) and the scriptorium of Silos in the late eleventh century”, Speculum (2018, in press)]