How were medieval codices made? Did you know that in each scriptorium the steps required were executed differently?

A couple of weeks ago, it was launched another great resource to add to the collection of websites dealing with medieval manuscripts: Quill. Books before print. As the authors of this new – and gorgeous – site state Quill “gives you a tour through the making of the medieval manuscripts”, explaining in a very clear and straightforward manner how codices were made and used. Quill explains how was the process of choosing the writing support, organising the pages, preparing them for writing, how was the process of copying and correcting the text, adding the elaborated initials or illuminations we all love from medieval manuscripts, a binding, and, finally, how were these books used. Having this information well organised and explained left me thinking about my Visigothic script codices.

The process of making was the same for the almost 400 hundred codices gathered in the catalogue, but, was also the same the way of executing it? Do this type of codices have anything distinctive that allow us to recognise them not only for the script in which they were written or for the Mozarabic style illuminations they tend to include? In fact, they have. The preparation of the page was not exactly the same for Visigothic script codices than for Caroline minuscule ones. Moreover, it was not even the same in all areas of the Iberian Peninsula!

On Quill we can read:

“A medieval page consisted of both horizontal and vertical ruling. To add these guiding lines to the blank page, the scribe would prick tiny holes in the outer margins, as well as in the upper and lower ones. Lines were then drawn between these holes, usually with the help of a ruler… Until the early twelfth century the ruling was done by pressing down on the parchment with a sharp object, producing a “gutter” that would guide the scribe’s pen (called ‘dry point’). This type of ruling was replaced by drawing lines with a pencil or pen, which left more visible traces on the surface of the page (called ‘plummet’).”

There are two techniques alluded to here that were not executed in the same way in Visigothic script codices than in any other medieval manuscripts: 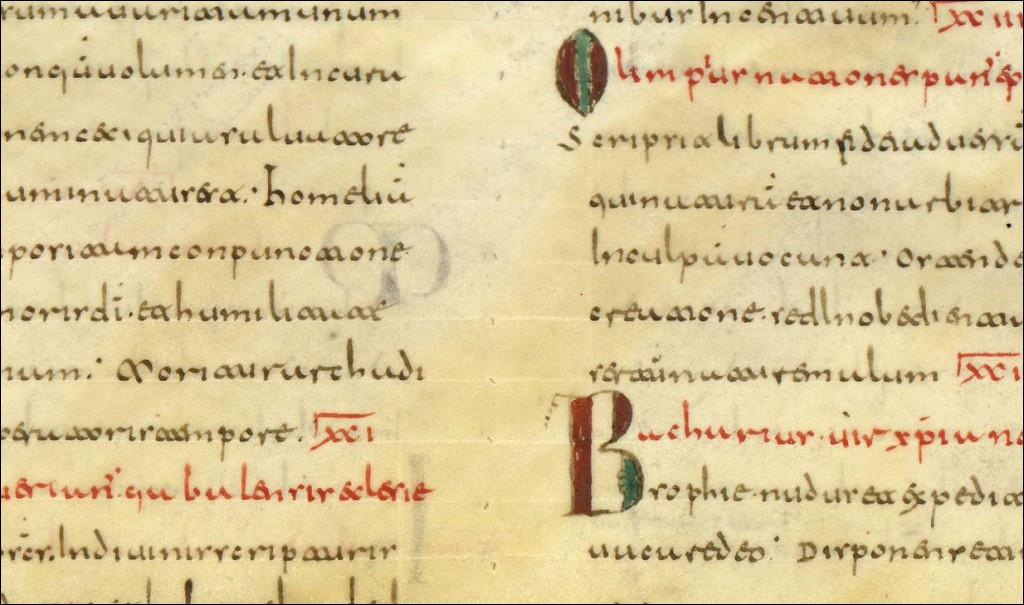 First, the pricking. In Visigothic script manuscripts, especially in those made and written in the Mozarabic communities of the south, the pricking for the horizontal lines was not always made in the outer margins. Actually, it was made right in the middle of the page!

When the layout of the page was designed for presenting the text in two columns, the holes were made in the space left between the columns. If there were three columns, which was the preferred distribution for southern codices, then the pricking would be made near the third column (in the second space left in between). Only if the text was not divided into columns, the pricks would be in the outer margins; this was the “continental style”. In northern Visigothic script codices, the layout that was frequently used was also that of three columns, but only until the 11th century, and the pricking could be made as in the southern examples or, more often, following the “continental style” by French influence.

The vertical guides were also different. They were made in the margins too, but they tend to be double vertical lines on the left and right margins and single ones between the columns.

Second, once having the guides, the ruling was indeed done with a dry point – until the 12th c. at least; Visigothic script likes being traditional –, however, the system was not usual at the time: the ruling was made after folding the bifolia and having the quires done.

Medieval codices were organised by quires, that is, groups of folded pieces of parchment. On Visigothic script codices, as well as on some of the continental ones, four folded bifolia were grouped together to make a quire (‘quaternion’). The order of placement of the bifolia to make a quire was not random, but followed a standard known as Gregory’s rule: hair side faced hair and flesh side faced flesh. For ruling these folia, the copyists followed what is known as the “Iberian or Spanish system” which consists on making the ruling after having the quire, and only on the odd pages; ruling the recto of the first folio with a dry point, the pressure made will rule the second folio too, etc. As it happens with the pricking, this way of ruling the pages was frequent for Mozarabic codices made in the southern Iberian Peninsula, while in northern “Spain” was only used around the 10th century. In areas such as Galicia-Portugal and Toledo, the “Iberian system” was preserved, as it was the script, for long. In fact, while all Europe was ruling with colour instead of with dry point, these areas were still using it. 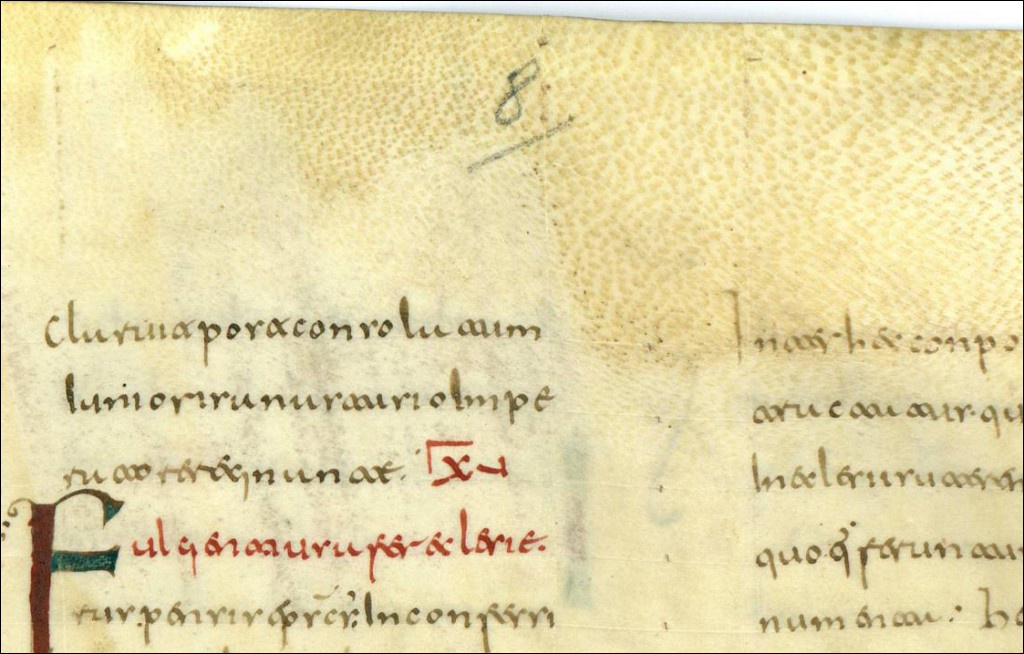 So, the question is, why in Visigothic script codices we can find this in-the-middle pricking and the fold-it-first ruling of the quires? The composition of quires by grouping four bifolia, the layout in columns, the pricking within the text box for horizontal lines (the vertical lines seem to be a medieval creation), and the ruling by dry point after folding, were all codicological techniques used in Late Roman codices.

Once the Visigoths settled in the Iberian Peninsula in the early 5th century, they kept and continued the traditional Roman writing practices as the Visigothic script amanuensis did. However, whilst in the northern Iberian Peninsula the Christian scribes were not preserving their heritage so eagerly against continental influence, and so they sometimes chose to make their work easier, the Christian communities in Al-Andalus really continued the tradition. For these scribes and copyists, the specific techniques they followed were their identity.

Thanks for drawing attention to Quill: Books Before Print: I am so glad it is proving useful and enjoyable at the same time. Also, I love (and admire) how you add your own insights to those presented on Quill, many of them were new to me. There is evidently still lots we can learn from each other, as scholars working on manuscripts from different corners of Europe. Keep it up!

Thank you Erik. I find Quill and excellent resource. I read every single entry and the work you have done there summarizing complex things in such a wise way is perfect. I am glad to add my bit – although I am not an expert on codicology.
It is really amazing how writing practices and even codicological techniques were interpreted and developed differently in correspondence with the cultural context. We cannot be experts in all areas of Europe, so it is good to know on whom one can rely for highlighting and try to understand those differences.