Codicologically speaking, what is the difference between a codex produced in a northern peninsular scriptorium and one in the south?

I had a great time last week reading about Codicology and writing the post on the techniques applied in Visigothic script codices for pricking and ruling the pages, both different from that used on coeval continental codices. I do not usually read many works on the topic, although I know I should, especially not one as useful as that published by E. Rodríguez (available online) in which the codicological (and cultural) differences between codices made in the northern and the southern Iberian Peninsula are so well explained. Part of my research focuses on accurate geographical and chronological placement of the manuscript sources I am finding as well as those already gathered in the Online Catalogue. For conducting that task, I usually build my research upon palaeographical analysis, reviewing what has been said about the evidence. However, dealing mostly with codices as I have been doing lately, the codicological information they provide must be taken into account too since it has proven to be a fundamental resource.

Therefore, while in the last post I briefly wrote about two aspects of the “architecture” of Visigothic script codices, adding a few notes about their European counterparts, it is my purpose now to expand that information a bit, summarising the remaining features as well, and thus writing a sort of small guide for later use to contextualise these books. I will leave illumination and bindings to a specialist.

that of those made in the northern Iberian Peninsula

In general, the parchment used as writing support in the south seems to be of better quality than that used in the north. In the south it tends to have been more heavily worked, being prepared for writing, as can be seen by comparing the different tone of the two sides of the skin, hair (darker) and flesh (clearer) [FIG. 1]. Also, bearing in mind that the layout of the page preferred in the south contained three columns, as will be explained, the skins and, in general, the codices, tend to be bigger.

As for the raw material, although no DNA analysis of the skins has yet been made, it seems that besides cows, calves, sheep, and goats, deer and gazelle were also used in the south as a primary source for obtaining parchment.

One might consider whether the skills of the people who prepared the parchment for writing in both cultural contexts were or not really different, or rather if the larger number of production centers in the north, with great differences from one another, leads to a misconception in relation to the technical training. To reduce costs, secondary centres would use parchment of lower quality for their codices and since more of these might have been preserved the statistics might also vary for this reason. It would be interesting to study, quantitatively, this aspect for further research on “the culture of writing” on Arabic and Christian soil. Moreover, the raw materials and the process for manufacturing inks seems different according to recipe books on the subject. From my perspective, digging deeper into these aspects, materials and techniques of preparation, could be revealing and helpful not only to attribute the codices to their context, but to analyse the influence between centres.

Medieval codices were organised by quires, that is, groups of folded pieces of parchment called booklets or gatherings [FIG. 2].

There are different ways of folding the parchment, depending on the text the copyists wanted to copy and the size required for doing it. In both northern and southern Visigothic script codices, as in many other areas, the type of quire preferred was that formed by four bifolia grouped together, making what is called a ‘quaternion’ [FIG. 3]. This method will be the one used in the Iberian Peninsula until the first decades of the 13th century.

The order of placement of the bifolia to make those quires followed Gregory’s rule, as usual: hair side faced hair side and flesh side faced flesh side. This system is not as elaborate as one might think:

In southern Visigothic script codices, the text is usually distributed within the page in 3 columns [FIG. 6], while in Leonese codices this layout was mostly used during the 9th to 11th centuries only. There were also codices with the text divided into 2, 4 and single columns. 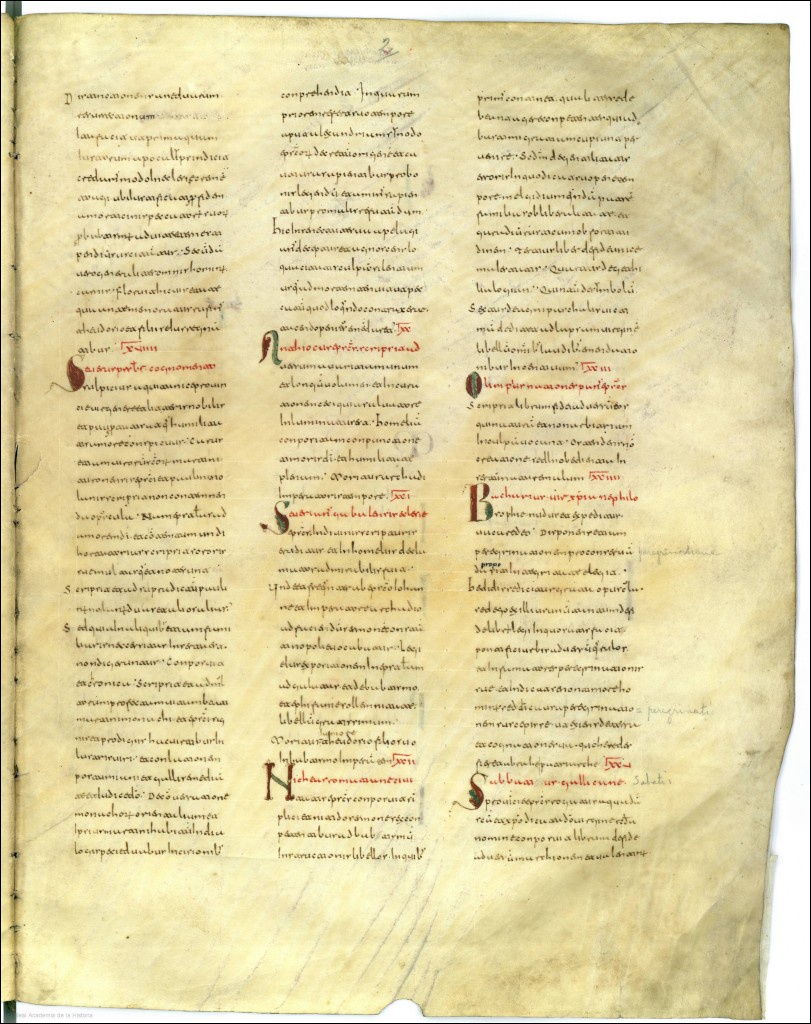 Pricking in the intercolumn space for ruling the page horizontally is one of the most obvious differences between codices made in the Iberian Peninsula in Visigothic script and those made abroad or in other scripts. If there were three columns, then the pricking was made near the third column (between the second and third columns). When the layout of the page was designed for presenting the text in two columns, the pricks were made in the space left between the columns. Only if the text was not divided into columns would the pricks be in the outer margins of the single column as was done from the 5th century on.

This characteristic technique is especially seen in southern Iberian examples, while the Visigothic script codices made in northern scriptoria, although sometimes following the same system – particularly in the earliest examples – tend to show the continental one, meaning, the holes made in the outer left and right margins [FIG. 7]. 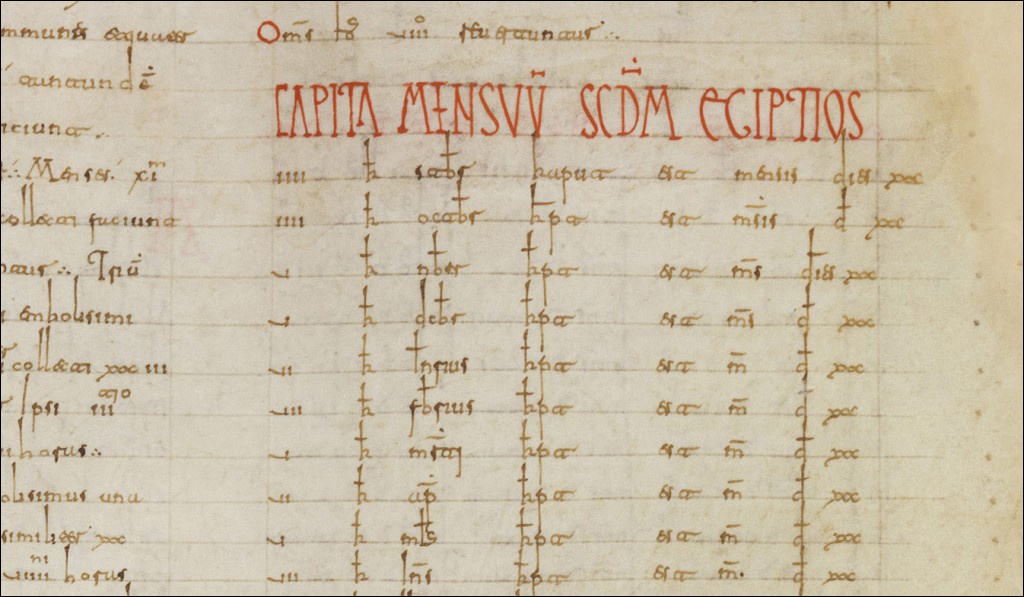 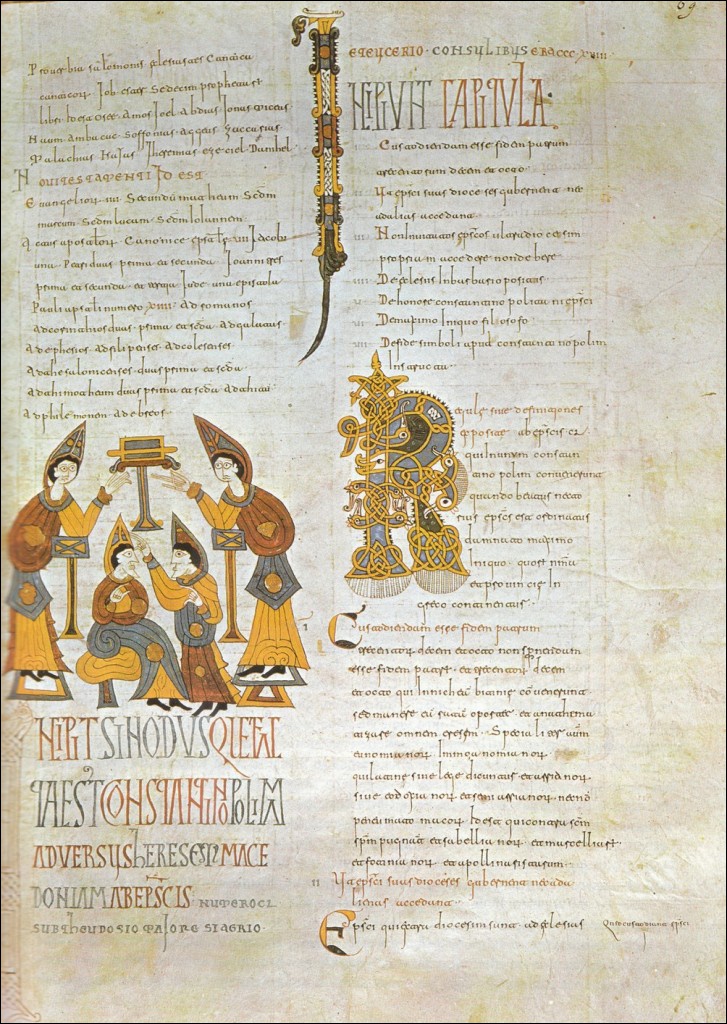 Visigothic script scribes from the south followed the “Iberian or Spanish system” which consists of making the ruling with dry point, as usual, only in the odd pages of the quire once folded; the pressure made ruling the recto of the first folio ruling the second etc. This technique is slow and laborious since it requires repeating the same procedure four times, one for each of the four bifolia that make up the quaternion. It was not a Visigothic script invention as some Late Roman codices were also ruled following this technique.

In the northern Iberian Peninsula, on the other hand, this system was only frequent in the 10th century and used at the same time as the continental method of ruling before folding. In the 11th and 12th centuries, it was preserved in traditional areas such as Toledo, Galicia and Portugal, where the script was also in use longer.

As can be seen also in coeval medieval manuscripts, the first page of Visigothic script codices was intentionally left blank. Therefore, the book started with the verso of the first page.

Several quires were grouped to make a codex. Once they were written, in order to ensure that the quires were not arranged in the wrong way, they were organised by adding signatures in the last page of each quire [FIG. 4] following the Late Roman tradition. This technique was used in southern and northern codices alike, although in the latter a new technique was also used: the catchword [FIG. 5]. As with signatures, catchwords were used to indicate which quire should follow next by repeating the word/phrase at the start of the next folio. 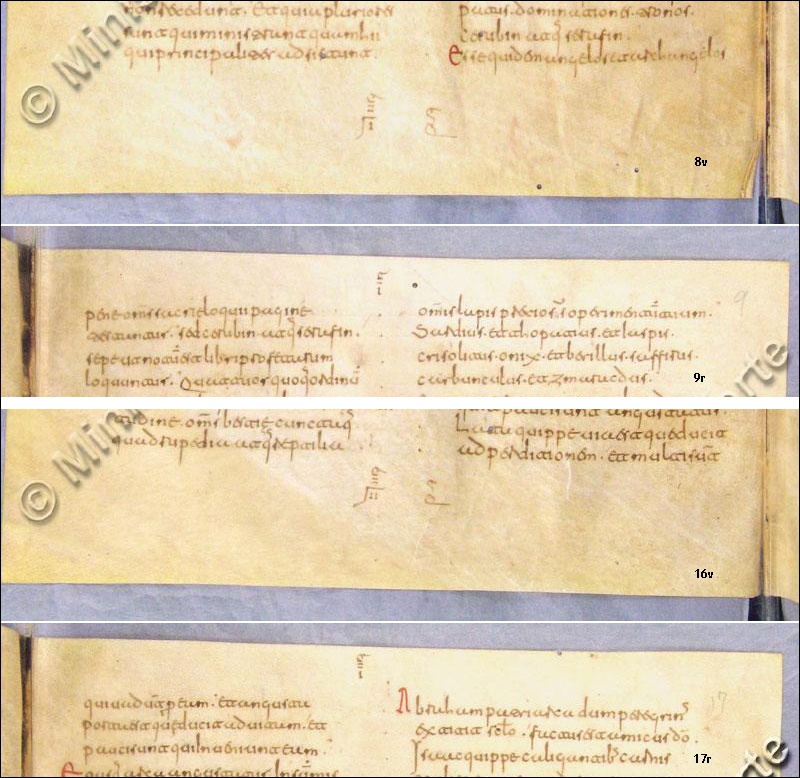 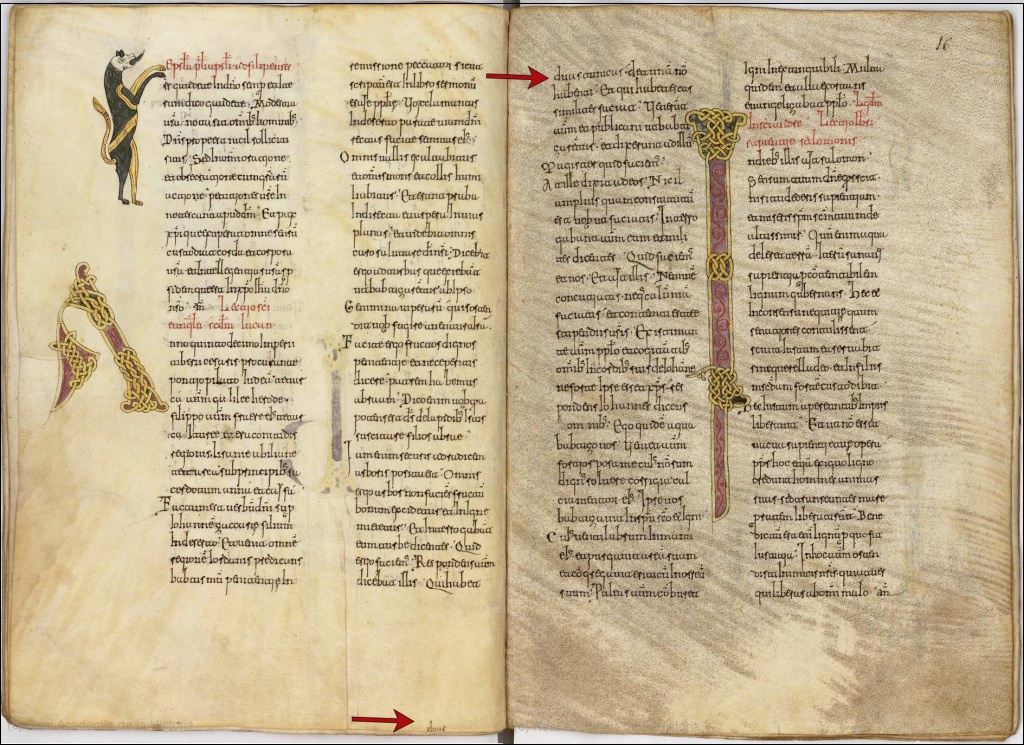 It seems that both traditions, southern and northern, did not merge; if a Mozarabic scribe moved to the north and started working in a northern scriptorium, his habits would fade among those of his local colleagues. Scribes and copyists working in the south were not influenced by their Muslim neighbours either [see the codex in the Islamic world].

So, in general, if the codex has its text organised in 3 columns, with the pricking done between the columns, the bifolia ruled after being folded, and the quires arranged with the help of signatures, it will more likely be a codex made in the south; while if the page layout shows 2 columns, with the pricking in the outer margins, the pages ruled before being folded, and the quires organised by catchwords, it will more likely be an 11th-12th century northern codex.