Do you know when was Palaeography as a science born and to what purpose?

The Enlightenment was a revolutionary cultural movement, started in the late 17th century and quickly spread throughout Europe, in which the main traditional ideas were questioned by applying scientific methodology. Changes in the consideration of all areas of knowledge set the basis for our current research process, and, in that sense, Palaeography and, more precisely, the study of Visigothic script was no exception. 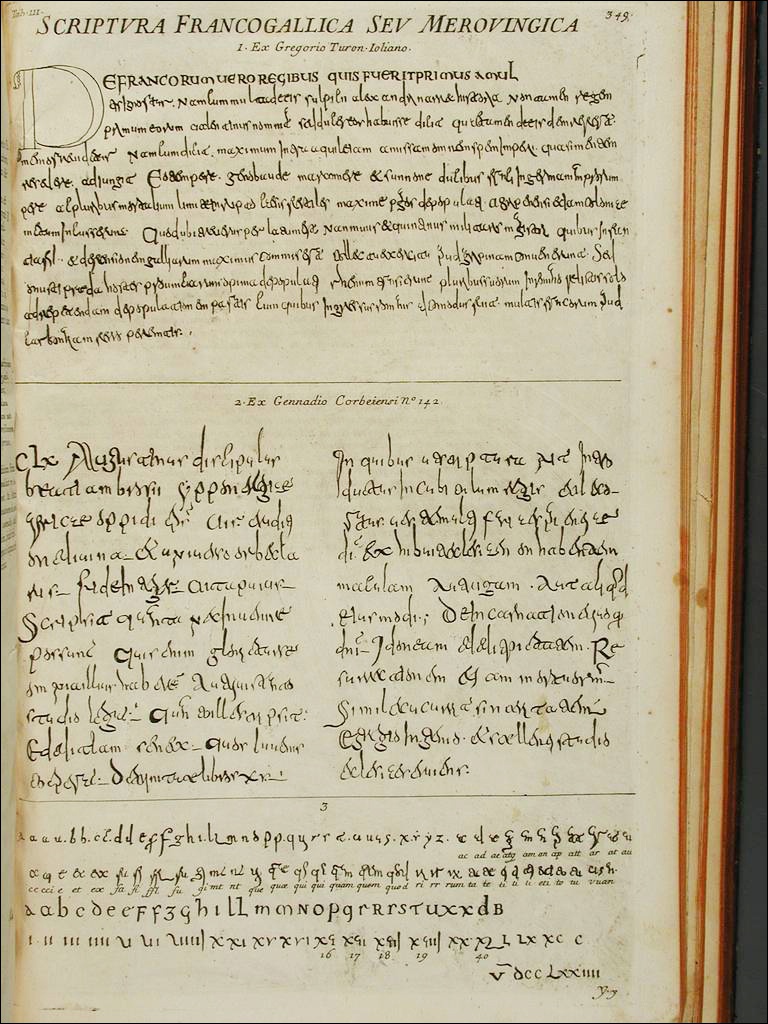 During the medieval period, all references we have of intellectuals studying Visigothic script show that they were focused on manuscript identification, the study of the script alphabet and the interpretation of the abbreviation system, the first problem for the correct reading of documents, making lists of abbreviations and trying to decipher them. The Enlightenment changed the study of medieval manuscripts and their scripts: from palaeography understood as a science of reading, aimed at enabling reading the texts, to scientific palaeography understood as a science through which the scholar not only pursues reading but understanding the script and its cultural context. And all started with Mabillon’s De re Diplomatica, published in 1681.

In De Re Diplomatica, Mabillon acknowledged for the first time the problems the discipline had for analysing manuscript sources: when he read Papenbroch’s Propylaeum antiquarium, published in 1675, he realised that in order to be sure when deciding if medieval documents were or not authentic he was lacking a science, Diplomatics, born with his work, as well as some refinement in approaching scripts. Despite being a manual primarily focused thus on Diplomatics, Mabillon approached Palaeography for the first time as an independent science, which, using its own methodology, lead to a specific purpose: to analyse the nature of the graphic signs not in order to provide elements for historical work, but for the study of the intrinsic development of the writing itself, i.e., its origin, evolution, changes and variants.

There was only a problem with Mabillon’s work: he thought that the so-called national scripts – Visigothic, Beneventan, Merovingian and Insular – were a product of “barbarian” tribes and not the logical evolution, by regions and communities, of the Late Roman scripts. It was not until 1727 when, thanks to Maffei’s Istoria Diplomatica, this mistake was amended. After him, the scientific paleographical study of Visigothic script flourished.

Now, looking back to the manuscript sources that scholars were eagerly collecting and studying to “enlighten the treasures hidden in archives and libraries”, it can be seen how useful Maffei’s logical explanation was. The 18th-century rise of literary-historical studies in the Iberian Peninsula was instrumental in opening borders for intellectual exchange that allowed these new approaches to manuscript sources to arrive: from 1738 to 1780, five treatises specialised in Spanish Palaeography were published [1]. Think for a moment about them: it was fundamental to include reproductions of each manuscript they were trying to contextualise to make themselves understood, a not so easy task almost a hundred years before photography was invented. They manually reproduced facsimiles, and for that task, it was particularly well recognised in Spain as well as abroad Francisco Javier de Santiago Palomares. He was so good at his job that some of his reproductions have been thought to be originals! (see Fig. 2).

These paleographical works of the Enlightenment were great for their time even bearing in mind they did not use the actual name for referring to Visigothic script (they used goda, gótica/gothica, antiqua…), that they thought the script suddenly “popped out” in the 5th or 6th century, and that they had problems in understanding how the transition from Visigothic to Caroline minuscule took place (they were still following Lucas de Tuy and Jiménez de Rada as for the provisions of the Council of León; they thought the change was imposed). There were some bizarre ideas too, as that of Nasarre who thought that Gothic script was the same as Visigothic script, which has survived to Caroline minuscule (Gothica moderna vs. Gothica antiga).

Their advances were, nonetheless, crucial: they not only discussed the graphic characteristics, abbreviations, musical notation, signs and orthography of Visigothic script, but also realised that the script was not always the same. They distinguished its different typological variants (cursive and minuscule mainly, with some outlandish ideas in between) and also saw that the script was used and that it evolved in different ways in each area. That is, in 1780 once Merino de Jesucristo published his treatise (“the school for reading ancient scripts”) summarizing coeval and previous works, the main avenue of research on Visigothic script, still open and not yet solved, started: the study of the regional variants of Visigothic script.

Merino was clever enough as to see that the Visigothic script used in southern Spain (Andalucía) was different from the one used in northern Spain (Castilla), even distinguishing specific graphic features from one area or the other. He also saw that it was not the same script in the 9th than in the 10th century, since the most recent examples of Visigothic script from the northwestern Iberian Peninsula were graphically influenced by the script used in Catalonia, what will be Caroline minuscule. (Note: for those of you who are well trained in palaeography, Merino was also the first scholar who said the script was written by strokes and in times, that is a hundred and seventy years before Mallon’s Paleographie Romaine.)

Although all these considerations are not completely accurate – to refine them is what palaeographers have been doing for the last two hundred years –, 18th-century scholars set the basic foundations to continue studying Visigothic script: Roman script origin, 5th to 12th century as extreme dates, two basic typological variants, their most basic graphic characteristics, and the sense of regional differences and evolution.

19th-century treatises on Palaeography, although refining some aspects on studying Visigothic script, were not as revolutionary as the 18th-century ones, with the exception of Muñoz y Rivero’s Paleografía visigoda, published in 1881. The summary of previous research Muñoz did in his book allowed him to clarify the origin of the script, its graphic characteristics by typological variants and evolution by regional variants, as well as future scholars to go further in studying the script and its manuscripts.