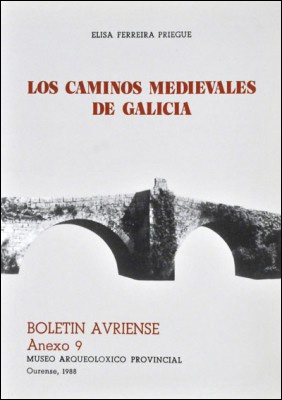 Studying the graphic evolution of Visigothic script, specifically the minuscule variant in transition to Caroline minuscule script, I grabbed this book from the library because I thought it would help me understand how the new writing system slipped in Galician scriptoria, marking the Visigothic script from the mid-eleventh century onwards. I started reading and I could not stop until finishing it!

The author of this book, Elisa Ferreira, is a professor of Medieval History at the University of Santiago de Compostela. The work is excellent and very interesting for reading it as a reference book and even as a literary work. It thoroughly reconstructs all the roads, main and secondary, linking villages, monasteries, and cathedrals of medieval Galicia in such a detail that you can imagine people travelling through them, suffering hardship, carrying goods up and down... I really enjoyed reading it.

In addition to the useful information, I found directly related to my project and which I will discuss below, I learned two interesting things about the Roman roads and their transition to medieval times:

Anyway… as I was saying, the motivation that led me to choose this book was my interest in studying how the French graphic influence arrived in Galicia. How Caroline minuscule script was spread across the Kingdom. 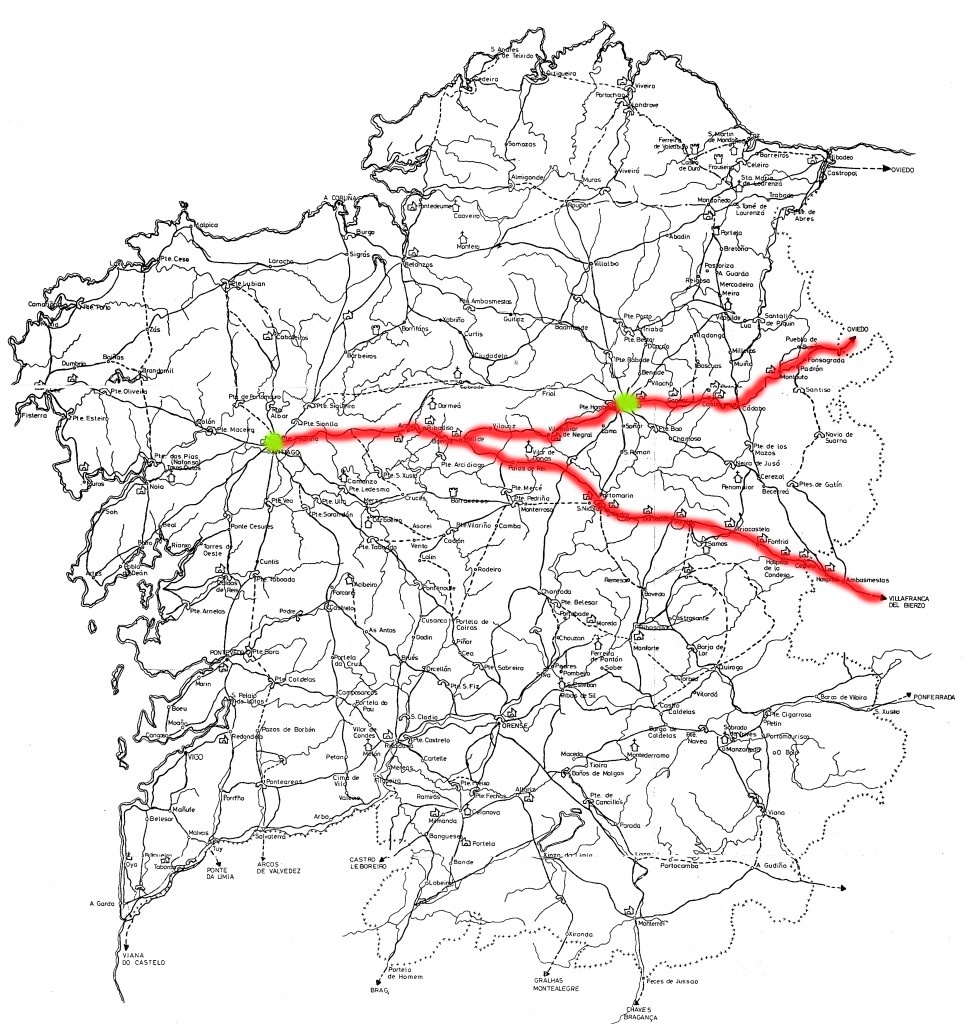 ‘Los caminos de Galicia’. I have highlighted the two ways (the Primitive Road at the top) in red and the sees, Santiago and Lugo, in green.

The medieval terrestrial route linking Europe with Galicia in the Middle Ages was the Camino de Santiago. Through it has to be assumed not only goods from abroad the Kingdom were circulating but also books, scribes and maybe even masters. Displaying the open road routes to Santiago, the two centres studied, Lugo and Santiago received this French influence, theoretically, alike. The so-called ‘Primitive Road’, in use since the mid-ninth century, went through Lugo in its direction to Santiago. While following the ‘French Road’, opened in the tenth century, pilgrims could choose whether to stop in Lugo or go directly to Santiago.

So, if the road went through both centres, why was the Caroline minuscule influence stronger in Santiago than in Lugo? I have two theories:

I will keep working on this. So many questions to answer!

French influence is clearly responsible at Santiago, with the appointment of Diego Gelmírez, who was associated with Cluny, and regarded it as his ‘mother house’. He must have had a scriptorium, whose leading lights were the compilers of the Historia Compostellana. This was also the period of influence of French religious orders, principally Benedictines and Cluniacs. The sadly missed Richard A Fletcher is essential reading for this period. It must be remembered also that Santiago was much more important than Lugo; it had the Saint’s remains, after all. All this, I fear is off the top of my head. If you want to discuss it at greater length when I recover from the flu, you can contact me off-list at xelmirez@gmail.com. Good luck. and Happy New Year, David Mackenzie.

David,
I am glad to hear from you, it has been a long time! I hope you are feeling better.
I know that Santiago was more important, I know that Xelmirez was obstinate enough to accomplish that, but what keeps me amazed is how can be followed all the politic stuff through the script, even an ‘a’ can tell us so much! My intention with this post was to talk from an outsider point of view (as I am doing with the next one on graphic influences) but I am Galician after all, maybe I tried to avoid it too much… The first chapter of Richard A Fletcher’s book on Xelmirez is something I know from heart, I always smile when he says that Galicians are ‘friendly and cheerful’. Anyway, my next post will be about Burgundians, the Gregorian reform, Cistercians and so on, so I will be pleased to chat about that with you. But, a warning, I am not on “Xelmirez team”.
All my best, Ainoa.