So, we have decided to record our sale, now what? How was the process of writing legal acts during the Middle Ages?

In the last posts I wrote about the technical process of making a codex, briefly explaining the selection and preparation of the writing material, the arrangement of the bifolia to make booklets and quires, the methods for ruling the parchment depending on the layout of the page, and the resources upon which the copyists relied to make the collaborative task of writing a codex easier. All of that highlighting the differences depending on if the codex was made in a northern or in a southern scriptorium, always considering the examples preserved.

To copy a codex vs. to write a charter

The elaboration of a new codex was a very expensive and time-consuming task that involved several specialists working together under the guidance of a magister scribe and, usually, an abbot [FIG. 1 above. Scribes at work! Detail from the Beato of Tábara fol. 341 © Madrid, Archivo Histórico Nacional, Cód. 1097B]. Codices were mainly done to answer to the teaching and pastoral needs of each ecclesiastical community. Thus, once decided which work needed to be copied, and having acquired one exemplar of it via medieval interlibrary loan (archetype), the same institution defrayed the expenses. But there was another option too, even in the early middle ages: to seek for external financial support.

The higher social classes, noblemen and kings, besides contributing to the constant increment of ecclesiastical institutions’ wealthy by granting them with lands and other properties, also saw in gifting books a way of earning heaven (and political support when needed). In many charters, we have notes about lords profusely donating books to monasteries, especially in the time when these institutions were founded everywhere. Those books could have been already copied or not, being understood in the second case that the donor would give to the institution the necessary amount of money to copy the chosen work, and, in the first case, very uncommon until the late middle ages apart from certain exceptions as can be when dealing with bishops, that those books switching home were part of the benefactors own library.

Once having the money, the task of making a book could start. And once having the archetype, the copyist “just” needed to duplicate the text – and I am quoting “just” not to diminish the tremendous work copyists did but to emphasise that it was not always a creative process. But, how about the process of making charters? 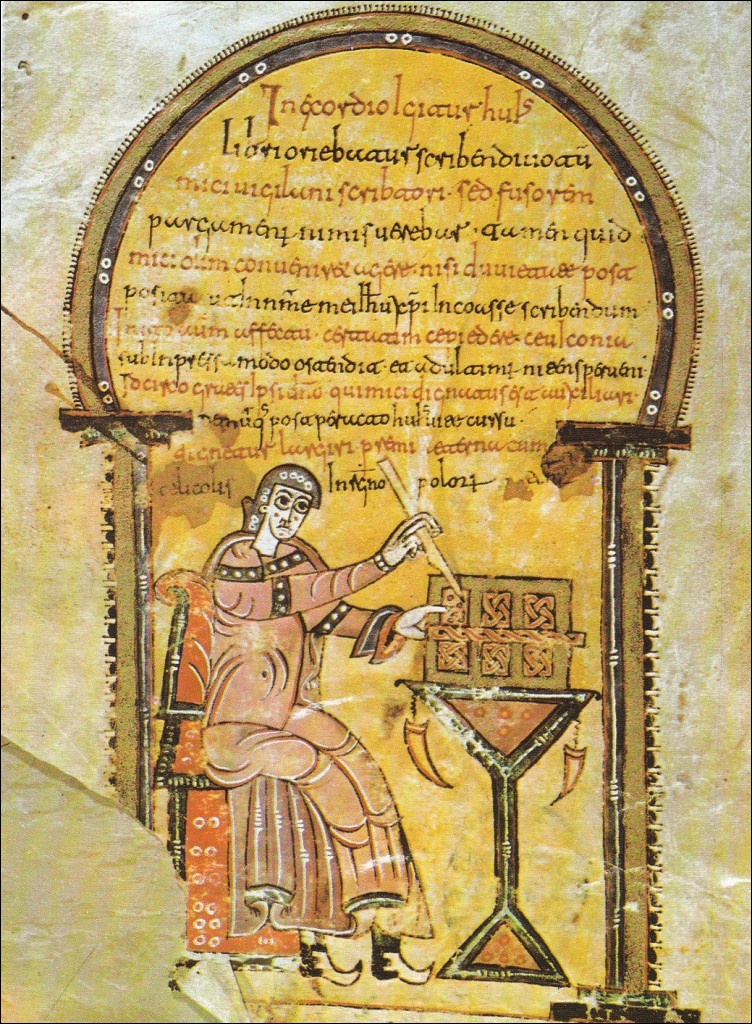 For each one of the thousands of charters written in Visigothic script preserved from the Iberian Peninsula, both what is now Spain and Portugal, there was a specific process too. And one that required much more from the scribe, and gives us, at the same time, much more information about him.

While copyists only needed to copy, what was required from early and high medieval peninsular scribes was to listen to what the author of the charter needed, condense it in order to elaborate a draft, have enough knowledge of law and Latin so they could understand and use models and adapt them, and finally to have good enough writing skills as to be able to present a decent written testimony of the transaction.

In some cases, copyists of codices also wrote charters [FIG. 2], what allow us to follow their professional careers and, by comparison, analysing the graphic differences between testimonies, to know more about how they understood writing practices. Looking at a charter, following the process in reverse, it can be thus obtained plenty of substantial data about the cultural level of the scribe and the scriptorium in which he worked and was trained to reconstruct both the process of writing charters and the context.

Briefly and bearing in mind that I am writing about Visigothic script scribes, and thus more or less prior to the 12th century when the script started to be finally substituted by Caroline minuscule, the main steps distinguished in charter’s genesis are two: actio and conscriptio. The first term alludes to the discussion the author of the charter and the addressee had pondering the legal action they wanted to do and to have written. Whether they wanted, for example, to exchange a land or the author of the document to sell a portion of property to the addressee, they first needed to agree. Once achieved a consensus, the conscriptio or the process of recording the action in writing started. Several steps can be distinguished here too, the main ones the iussio, dictatio, recognitio, and validatio.

The iussio, also called rogatio, refers to the formal request made to a scribe for writing the document. Who the scribe was depends on who the author and the addressee were. If we think about a small landowner from a rural area, the scribe would have more likely been a priest from the nearest parish or monastery. If the addressee was one of his neighbours, they both would have agreed to find him. If the author was a king and the addressee a monastery which will receive the grant, the scribe would have been one from the beneficiary’s contact list, also a monk (that before the royal chancery was organised, what happened in the first half of the 12th century) but a skilled one.

The dictatio recalls the necessary draft that combined notes about the transaction and models that will end in the charter as we see it today. Well-trained scribes from the main institutions, used to write charters, might not have needed to make drafts, knowing the structures by heart. In those cases, they could have just jotted down some notes (names, description of the land sold, etc.) in the outer margins of the parchment, that will be cut once written, or in its verso. Regular scribes would have need to find the structure. Visigothic script scribes relied on previous charters recording, more or less, what they needed to write, changing names and other necessary data, and on the Formulae Wisigothicae, a collection of around 45 formulas to which the specific information was added. No draft has been preserved since the writing support mostly used for them were wax tablets, but it is known of their existence since in some charters it can be deduced that the text was copied from a previous draft (the scribe duplicated words), or that the main data of the text, for example, the names of author and beneficiary, were written filling blank spaces left [FIG. 3].

Also, and although not in the first centuries of the middle ages, the scribe who elaborated the draft, could not have been the same as the one who finally wrote it; for those cases, the charter usually informs us about who the dictator/notary and the scribe were.

Whatever the case, once the text was decided the charter was written. The parchment for writing a charter was, more likely, prepared in the same institution in which the scribe was working. The final product did not require to be as perfect as if it was being made for a codex and thus only the flesh-side was scratched. The size depended on the text since the parchment was not cut before being written but after. The scribes of charters worked from the entire piece of parchment (you can see in FIG. 4 the original form of the skin and a zoom of the hair side); they started to write out each text neatly, maximising the surface, and then proceed to cut them. It can be seen in FIG. 5 how they cut the ascenders of the first line of the document. Thus, sometimes charters were copied in left-over parchment what gives them their irregular size. In some cases, especially when the scribe was also a copyist of codices, the parchment was ruled, but, in general, the text was directly written on the parchment.

The next step, recognitio, alludes to the checking done between text requested and text written. Some words or paragraphs could be erased and amended although that was not frequent.

And finally the validatio, meaning the addition of all resources medieval scribes had to validate the text, aka subscriptions of witnesses and signatures, although Visigothic script scribes more likely added them at once with the text, given the examples preserved and bearing in mind how they proceeded to cut the parchment.

In the late twelfth century and throughout the thirteenth, changes in the organisation of the chanceries and the establishment of public notaries will lead to variations in the process of making charters. But to write about this is outside the Visigothic script chronological context.

Fantastic post. Now I know for sure what those ‘X rogatus’ meant! Thanks a lot for such clear and didactic exposition.