The Secret Life of Writing: People, Script and Ideas in the Iberian Peninsula (c. 900-1200)

Visigothic script is the graphic form the Latin alphabet acquired for the most common writing uses in the Iberian Peninsula and Septimania during the Early and High Middle Ages. It is not just a writing system but the means of communication of the peninsular society during several centuries of the Middle Ages. For this reason, below you will find articles not only about this type of script from a palaeographical (analysis of writing), codicological (study of codices written or copied in this graphic system) and diplomatic (study of documents written in Visigothic script) point of view, but also about crucial topics in context within the fields of Semiology (signs used in manuscript sources) and on History (cultural context of Visigothic script). In the near future, sections on Art and Musicology will be also incorporated.

Diplomatics as a science / The elaboration of charters

Semiology as a science / Signs in Visigothic script manuscripts

Learn to write in Visigothic script!

Discover the illumination programme behind each Visigothic script codex, the popular topics of the so-called Mozarabic style 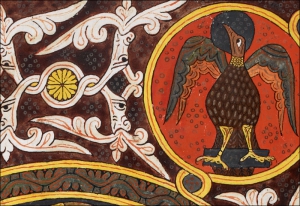