VisigothicPal is a resource for the study of Visigothic script and its manuscript sources. It is the digital counterpart of the project ViGOTHIC which aims to facilitate the study of this script, to make the scientific community aware of the needs and possibilities of conducting research based on Visigothic script sources, and to disseminate the research already carried out or in progress. VisigothicPal and ViGOTHIC intend to open the study of Visigothic script to everyone interested in Manuscript Studies. The project is funded by the European Union’s Horizon 2020 Marie Sklodowska-Curie research and innovation programme (2015-2017), and it is based at King’s College London.

You can learn more about the VisigothicPal project in the following posts:

This page provides the material I used for the workshop on Visigothic script I taught at the Pontifical Institute of Mediaeval Studies – University of Toronto, Centre for Medieval Studies in the spring of 2014. Feel free to use it for your own teaching or research if you want but please acknowledge the source. If you would like to see this workshop being made at your institution, do not hesitate to contact me.

[update July, 2018: I will upload a new set of more updated materials soon] 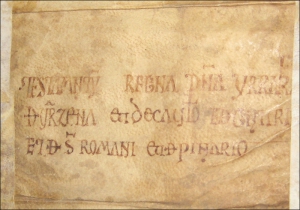